/sites/all/themes/penton_subtheme_wealthmanagement/images/logos/footer.png
Recent
Recent
Seven Tips to Help Financial Advisor Firms Protect their Customer Lists
May 20, 2022
Nine Must Reads for the CRE Industry Today (May 20, 2022)
May 19, 2022
Dondero’s NexPoint Targets More Than $1 Billion for New Wager on Single-Family Rentals
May 19, 2022
SEC Judges’ Constitutional Cloud Darkens After Appeal Ruling
May 19, 2022
Featured
The 10 Best and 10 Worst States in Which to Retire in 2021
Jul 15, 2021
Poll: 15 Classic Books on Investing and the Markets
Apr 03, 2020
Fifteen Must-Listen Business Podcasts for Advisors
Aug 14, 2020
Celebrity Estates: Jay Leno and Planning for Classic Car Collections
Feb 22, 2022
NAPA 401(k) Summit
brought to you by 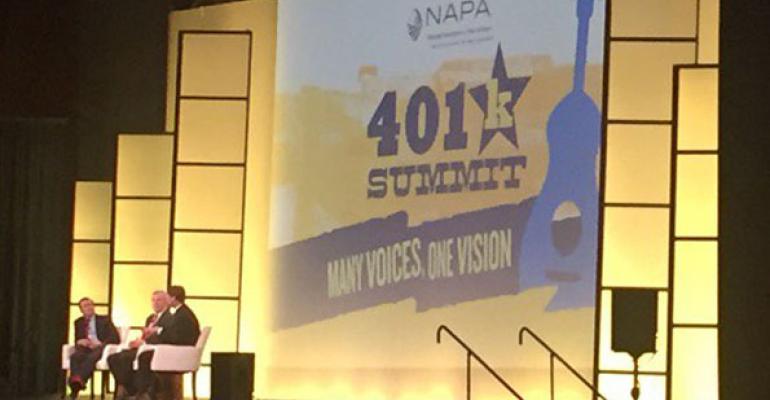 The Fine Lines of the Fiduciary Rule

The new rules for advisors to retirement accounts stretch to over 1,000 pages, but there is still much that is not clear.

A panel of retirement plan attorneys at the National Association of Plan Advisors conference on Monday discussed a few areas where advisors will need some guidance—likely from the Department of Labor itself—on how to comply with the new law.

One area on which they seemed to agree: Most retirement plan advisors should step up and meet the criteria to get the “streamlined” exemption for level-fee advisors, or what is becoming known as “BIC light.” That exemption isn’t as onerous as the full best interest exemption, and it may be easier than trying to stay on the full fiduciary side of the street.

There are more IRAs out there than plans affected by the rule, and having a strategy for how to deal with them is crucial.

But less clear are legacy IRAs from past rollovers that an advisor may still have on his or her books. This includes rollovers where an advisor collects some form of revenue sharing, such as trailing fees. Those won’t need an exemption from the rule as they have been grandfathered in, as long as some conditions are met. But advisors need to be careful.

“If you think about all the legacy IRAs, a lot of them are one-time rollovers,” said Marcy Supovitz, a principal with Boulay, Donnelly & Supovitz Consulting Group. “It’s someone who isn’t going to add any new money and, under the rules, as long as you are not adding any new money, and as long as you’re in a mutual fund IRA or variable annuity that allowed exchanges between funds prior to these new rules, you can still make changes between funds, and those accounts are grandfathered.”

"So if you are getting 12b1s fees on a large rollover you did years ago, and no new money is ever going to be added,” that can continue, she said. But any new money from another rollover would have to be put in another account, she said.

“But there are limitations,” argued Bradford Campbell with Drinker, Biddle & Reath. “You’d have to stay in the fund family. You probably can’t give advice on it. You probably just need to segregate that account and set it off to one side.”

“The practical thing to say is if you have an old grandfathered IRA, leave it alone,” said David Levine of Groom Law. “Don’t mess with it and move it somewhere else.”

Why couldn’t an advisor, acting as a fiduciary, present plan sponsor clients with a tiered pricing model, with different services for each tier, and let the client choose? Would that trigger the need for an exemption?

“I don’t think there is anything wrong with that,” said Campbell, at least for prospects. “If you are doing that with a potential client, that’s pretty clearly captured within the marketing approach,” which is allowed without triggering the need for an exemption to the rule. "It’s where you’re already a fiduciary (to a plan sponsor) and then you are saying, ‘Hey, we now offer these other services.’ That’s where you need to be a little more cautious about whether that’s a recommendation to hire yourself versus marketing.”

“We don’t have a definitive bright line on this point,” said Levine. “How far away does it have to be from saying, ‘Hire me for this’ to just saying, ‘Here’s a giant menu. Pick one.’ The department has to draw the line, and candidly, they may not be willing to.” Advisors will need to come up with a logic and documented process for why they do what they do, he said. “We’re all going to have to figure this out. It’s not a completely bespoke custom-made process you’re going to have to go through, but it’s not a completely free pass.”

“I think the key is solicitation,” said John Carl, president of the Retirement Learning Center. “So long as you’re laying out the menu and you’re running through a balanced approach, and the client is choosing, I don’t think that’s solicitation.”

“It depends on what the checklist looks like,” said Supovitz. “Think about how the rule is worded. Could something be construed as having led someone to take action, or not take action? And if it falls in that parameter, that’s an issue.”

“It goes back to the magic words,” said Campbell. “You’re going to have to have a very tightly controlled, scripted approach to things. There is a difference between saying to a participant, ‘I’d like to help you evaluate your options with rollovers’ versus ‘You should do a rollover with me.’ One is clearly a fiduciary recommendation to do a rollover. The other is marketing service and potentially providing education. And there is a way to just provide education to get to them making a decision to use you, but you have to be very careful with how you do that.”

“For those of you that can commit to the BIC light approach, that may be safer, and more preferable, even though it has conditions, than trying to ride the fine line on education and marketing,” said Campbell.

Investors rolling over old workplace retirement plan assets to a new workplace plan triggers the same best interest standard as a rollover into an IRA, said Supovitz, even if the advisor had nothing to do with the old plan and is a level-fee advisor to the current sponsor.

But what if you are a fiduciary advisor to a plan sponsor, “educating” new employees on the option to roll over assets from an old plan to their current one? Supovitz thinks this could be a boon to plan advisors when competing for rollover dollars.

“This is a big opportunity for those of us that are already plan advisors,” said Supovitz. In the rules, “you have to document why it’s in the best interest of the person to roll over into the (new) plan.” And part of that documentation will need to spell out the expenses in the prior plan and whether or not the employer was covering any of it. Only by knowing the previous expenses can an advisor make a best-interest recommendation. And that sets plan advisors apart from their retail counterparts.

“The typical wealth manager or advisor who never works with plans, they may be great at what they do, but they’re not in the world of what are all the underlying fees that may be incurred in a plan and what might the employer be paying or not be paying. So if you are the incumbent plan advisor, you have a definite leg up here as far as the plan you are working with. You know what all the fees are, you know what the employer is covering or not, you know the ropes—what to find out, where to find out. For the typical non-plan advisor, that’s not been their bailiwick.”

It’s also a risk, said Campbell. “As a business matter, can you afford to do all that research into a bunch of plans where you’re rolling in $25,000 here and there? The DOL did everyone a disservice by not giving these plan-to-plan transfers a blanket exemption or an easy way.”

“For plan advisors doing education enrollment meetings,” he said, “you can’t do all that work to directly advise in a plan rollover. Instead you’ll probably just limit yourself to education and say, ‘Hey, our plan allows in-plan rollovers.’”

But Supovitz thinks that knowing the landscape of retirement plan participants will give those advisors a boost in capturing the money of new employees. “Those of us who deal with plans know how to look that up and we know what we are looking for. Yes, it’s additional steps that have never had to be taken before, but it’s something that advisors who have never worked with plans don’t know.”

But not yet, Levine said. Information is power, and it will be leveraged. “It’s like scraping things off Facebook. There will be a solution, and there will be an API for that; we just don’t have it yet.”