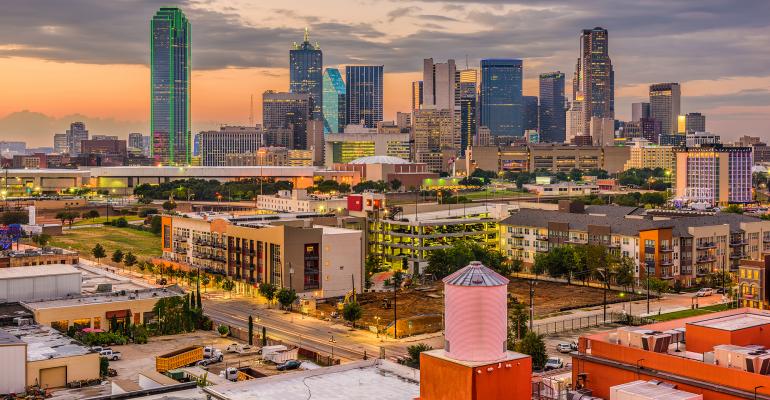 Many Sun Belt cities like Dallas were already growing quickly before the pandemic and are expected to continue to prosper.

For many Americans, the pandemic totally changed how we live. Downtown areas were quiet that once swarmed with people. Businesses closed. Highways emptied.

“People are still moving to the Sun Belt and the Southwest… That was happening before COVID,” says Jeanette Rice, head of multifamily research, Americas, for CBRE. “A lot of Millennials are going to continue to move to the lower cost areas.”

The five U.S. cities where developers invested the most money to start new apartment projects over the pandemic year are the same cities where they spent the most the year before—just in a different order, according to data from Real Capital Analytics, based in New York City.

Dallas was the busiest place in the U.S. for new construction during the pandemic. Developers started construction on new, apartment properties totaling $6.2 billion in Dallas over the 12 months that ended in the first quarter 2021, according to RCA. That’s a 3 percent increase compared to the year before. Even though most apartments developments are planned long before they start construction, developers can pull back quickly when they need to. For example, in 2009 during the Global Financial Crisis, apartment starts fell more than 50 percent compared to the year before.

Developers still believe in Dallas even though rents dropped 2 percent over the year that ended in the first quarter, and the percentage of apartments that were vacant climbed 60 basis points to reach 6.4 percent, according to Reis, Inc. However, average effective rents dropped less in Dallas than across the whole U.S., which fell 3.3 percent over the same period.

The population continues to grow quickly in Texas metro areas like Dallas. The population of the South grew more quickly (10.2 percent) than any other region of the U.S. between 2010 and 2020, according to results from the full 2020 Census released in May 2021. The population in Texas also grew more quickly (16.8 percent) than any other Southern state over that decade. Dallas also produced 1.5x more new jobs than new housing units over the business cycle that ran from 2008 to 2019, according to the Manhattan Institute.

Many Sun Belt cities like Dallas were already growing quickly before the pandemic and are expected to continue to prosper. The pandemic simply magnified the growth of these cities—sometimes at the expense of the most expensive cities like New York and San Francisco.

“Many Southeastern and Southwestern markets were barely hurt by the pandemic,” says Rice. “The recovery in the Sun Belt came sooner than it did in other places.”

Developers also started construction on billions of dollars in new apartment projects in expensive, gateway markets. But that new construction is still a lot less than developers invested the year before in places like the Outer Boroughs of New York City ($5.6 billion over the 12 months that ended in the first quarter—down 43 percent from the year before), Los Angeles ($5.6 billion—down 19 percent), Seattle ($4.3 billion—down 35 percent) and North New Jersey ($3.9 billion – down 27 percent), according to RCA. The amount developers invested in new construction fell even more deeply in the most expensive apartment markets like Manhattan and San Francisco.

These metro areas are all in states that continue grow, according to the 2020 Census, but not as quickly as the South. New York State grew 4.2 percent and New Jersey grew 5.7 percent between 2010 and 2020. These are also some of the most expensive apartment markets in the U.S., and the pandemic tested the willingness of many renters to pay thousands of dollars a month for a place to live. Rents fell 12 percent in New York, 5.7 percent in Los Angeles and 6.0 percent in Seattle over the 12 months that ended in the first quarter, according to Reis.