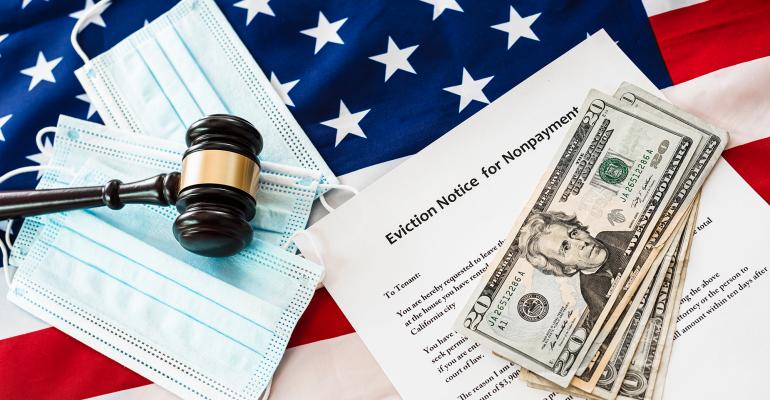 While the federal government has set aside billions to help renters and landlords, the disbursement process continues to lag behind.

While the strain on the U.S. economy from the coronavirus pandemic has been easing, with vaccination allowing many of the worst affected businesses like restaurants and hotels to return to operating at full capacity, one aspect of the COVID-19 crisis continues to this day: millions of renters are in danger of being evicted. With the funds from the federal government’s rental assistance program being disbursed at an excruciatingly slow pace (as of August, only 11 percent of the available funds had been distributed, according to the U.S. Treasury Department), many Americans have now missed multiple rental payments, sometimes totaling thousands of dollars. Meanwhile, the end of the federal evictions moratorium means there is no longer a backstop to prevent landlords from starting proceedings against non-paying tenants.

Apartment owners and managers in many jurisdictions now have the ability to file for the eviction of many renters who owe them money. In August, the U.S. Supreme Court overturned a moratorium on evictions created by the federal Centers of Disease Control and Prevention. So far, landlords have filed relatively few eviction cases, but that may change. Many of the smaller multifamily owners have lost a significant amount of the rental income they need to pay down their mortgages and pay their staff.

Congress seemed to have solved this problem in March 2021, when lawmakers made more than $50 billion available to help renters who lost income in the crisis. But as of the end of July, just over 10 percent of federal rental assistance funds had been distributed to renters and property owners, according to the National Multifamily Housing Council (NMHC).

“State and local governments and administering entities have bogged the Emergency Rental Assistance Program eligibility and distribution process down with needless red tape,” said David Schwartz, chair of NMHC and chairman and CEO of Chicago-based multifamily operator Waterton, in testimony to Congress on Sept. 10.

Related: Operating Multifamily Properties in a Time of No Evictions

Many states have taken a very long time to create programs to distribute rental assistance funding.

New York State, for example, only started accepting applications on June 1, even though Congress made its first round of rental assistance money available in December 2020. More time passed before the state could accept applications online without seeming to lose information, according to advocates who say the new portal is now operating smoothly.

“The new New York Governor, Kathy Hochul, has made improving rental assistance one of her first priorities, which makes us optimistic,” says Brendan Cheney, director of policy and communications for the New York Housing Conference, a non-profit affordable housing policy and advocacy organization. “She talked about adding more resources and staff to the program and also about ways to increase outreach to make sure everyone knows about the program and can apply.”

But government officials may be running out of time to get these billions of dollars in rental assistance to renters and apartment owners. Small owners of apartment properties have been hurt the worst by the pandemic. They were significantly more likely to see rental revenues drop by 50 percent or more, according to a recent survey by the Harvard Joint Center for Housing Studies. These types of owners were already more likely to have tenants in arrears before the pandemic. They also have a smaller real estate asset base to help diffuse their losses from missing rent payments. These landlords would benefit from having the federal rental assistance program pay them the back rent owed by their tenants. But they might not have the resources to wait many more months.

Larger owners and professional managers have fewer renters who have missed payments, relative to their overall portfolios. Waterton, for example, has just 1,698 households that still owe back rent out of its 24,000-apartment portfolio. It still adds up, however, to more than $8 million in delinquent rent.

There hasn’t been a flood of evictions so far, partly because of state and local moratoriums that still prevent evictions from taking in place in places like New York State. Apartment owners and managers continue to file fewer evictions cases per week since the Supreme Court overturned the CDC moratorium in late August than they filed before the pandemic—the total came to 4,580 renter households in the week ending Sept. 11 in the six states and 31 cities tracked by the Eviction Lab at Princeton University, according to their preliminary numbers as of Sept.16. That figure is likely to increase as the numbers are finalized. But even if the figure doubled (which is unlikely), the number of eviction filings is still significantly below the average before the pandemic. In January 2020, for example, apartment owners filed more than 18,000 eviction cases on average per week.

As of late August, 7.7 million renter households—more than one in seven—were behind on their rent payments and at risk of being evicted, according to the Household Pulse Survey from the Census Bureau. That’s more than double the typical rate before the pandemic. Roughly half of these households (3.7 million) said they were “very likely” or “somewhat likely” to leave their homes because of eviction in the next two months.

These are not necessarily the same people who had missed payments and felt threatened by eviction a year ago. Most of the renters currently in trouble said they had lost employment in the last four weeks (3.9 million renters). Only half had missed more than one or two months of payments. Only a fraction—roughly 700,000—said they owed more than seven months in back rent. Most (4.3 million) of these households had not applied for household rental assistance through state or local government.

“More outreach is necessary so that everyone knows about the program and can apply,” says Cheney.