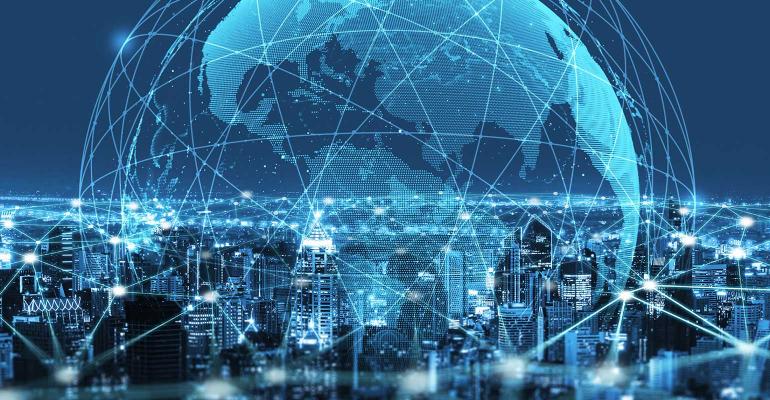 Rising rates and inflation are making it hard for foreign investors to assign correct valuations to assets. But experts say those are temporary setbacks and cross-border investment will rebound.

Earlier this year, South Korea-based Mirae Asset Global Investments dropped $520 million on a 1.16 million-sq.-ft. industrial portfolio in an off-market deal. Located throughout California and Utah, all eight buildings are 100 percent triple net leased to Amazon, which uses the facilities for last-mile distribution.

A few weeks later, the firm invested another $190 million in a 1.5 million-sq.-ft. distribution center in suburban Houston. The industrial property is 100 percent leased to Academy Sports + Outdoors on a long-term, absolute triple net-lease basis.

However, the Fed’s decision to raise interest rates has increased both the price of debt and currency hedging costs, which not only makes it difficult for international investors to meet the leveraged returns they seek, but also puts them in a position of not having the visibility into the valuation and pricing they need to make commitments, Foshay notes.

In the first quarter of 2022, inbound cross-border investment fell 19 percent year-over-year to $6 billion, largely due to the strength of the U.S. dollar, according to a recent U.S. Capital Markets report from commercial real estate services firm CBRE. International investors were net sellers with dispositions-to-acquisitions ratio of 1.6 (the only exception was the industrial sector, where foreign investors were net buyers.) To that end, market share of cross-border capital investment in the first quarter of 2022 was 4.3 percent vs. 7.6 percent in first quarter of 2021.

Last year, 30 percent of international investors were unable to place up to half of their U.S. real estate allocations, according to the 2022 International Investor Survey Report from AFIRE, the association for international real estate investors focused on commercial property in the United States.

Only 30 percent of non-U.S. respondents participating in AFIRE’s survey indicated that their volume of U.S. investments would likely stay the same in 2022. The majority of those respondents plan to allocate up to $5 billion each over the next year.

“Most investors I speak with are optimistic, but also understand that the next few quarters may be challenging,” says Gunnar Branson, CEO of AFIRE.

“As market volatility subsides and investors have a clearer sense of Fed policy and inflation, we expect cross-border investors to continue to be active in the U.S. market,” Branson says. “Amid increased geopolitical volatility and the war in Ukraine, the U.S. increasingly stands to benefit from its ‘safe haven’ status. These factors, coupled with rising allocations to real estate, are expected to drive continued robust investment to U.S. commercial real estate among cross-border investors.”

In recent months, the dollar has appreciated significantly against other currencies as the Federal Reserve has tightened its monetary policy and increased interest rates. The WSJ Dollar Index, which measures the performance of the U.S. currency against 16 others, is up more than 12 percent compared with this time last year and is more than 8 percent higher than at the beginning of 2022.

These fluctuations in currency have an impact on investors’ hedging costs. Depending on an investor’s home country, hedging costs can make any new investments less attractive.

“The last time the dollar peaked was in the early 2000s, and inflation is now at a 40-year high,” notes Darin Mellott, senior director of capital markets research with CBRE. “For most real estate investors, they’ve never in their careers had to deal with the circumstances we’re experiencing today. They’re having to navigate very difficult conditions and trying to underwrite deals in a dynamic environment.”

European and Asian investors are particularly vulnerable to currency fluctuations favoring the dollar, especially since many of these investors are legally required by their own countries to hedge against currency risk. For example, both German open-ended funds and South Korean institutional investors must hedge the equity portion of their investments.

“As it relates to cross-border investors, the strengthening U.S. dollar has increased hedging costs, acting as a potential mitigant on investment returns for investors from selected countries,” says Riaz Cassum, executive managing director and global head of international capital for JLL Capital Markets. “With that said, Canadian and Australian investors are currently seeing a pick-up when hedging U.S. assets.”

Canada continues to be a major player

Canada has consistently been the most active foreign investor in U.S. commercial real estate. Historically, our neighbor to the north has represented 30 percent to 40 percent of inbound capital, and it led the rebound in international investment activity last year, along with Asian investors.

Currently, Canada remains the largest source of cross-border capital. For the rolling four quarters ending in the first quarter of 2022, it accounted for 37 percent of total inbound cross-border investment at $23 billion. However, Canada’s year-over-year investment volume fell 24 percent, according to CBRE.

Similarly, Asian investors also pulled back, though not as much—year-over-year volume declined only 8 percent. Singapore was the second most active international investor in U.S. real estate, representing 23 percent of overall investment volume at $14 billion, while South Korea ranked as third with $5 billion in investments. For example, Singaporean sovereign wealth fund GIC has made several large portfolio acquisitions in recent quarters in the industrial sector, as well as in other asset classes.

“As you would expect, given the incredible growth of Asian economies over the last few decades, we continue to see growth in investments from South Korea, Japan, Hong Kong and Singapore,” Branson notes, adding that South Korean and Japanese pension plans have allocated a significant amount of capital that has not yet been placed to the United States.

Bahrain and Germany rounded out the top five foreign investors, according to CBRE. Syndicators such as traditional German open-ended funds Union Investments, Deka and Commerz Real continue to be active, Cassum notes.

And though Canada will likely continue to lead cross-border investing in the U.S., experts also note new institutional interest in the U.S. property markets from Latin America and the Middle East. Capital flows from these parts of the world tend to increase when there’s political and economic “stress,” says Jonathan Woods, COO of Excelsa, a Lebanese-based boutique investment firm that raises money from Middle Eastern investors though fund vehicles.

“Our investors want exposure to the U.S. because if offers yield plus growth,” Woods notes. “The U.S., with its strong demographics, transparency, liquidity and ample debt, offers an attractive risk-adjusted return compared to other countries and especially their home countries.”

Love affair with industrial and multifamily

Overseas investors are largely ignoring office properties and hotels, while continuing their love affairs with industrial and multifamily assets.

During the first quarter, the industrial sector garnered 35 percent of cross-border investment volume, the highest share for this property type on record, according to MSCI. Even so, the net quarterly acquisition volume of $1.6 billion was low, relative to the total for 2021, when overseas investors added $15.3 billion of industrial assets.

“Institutional investors continue to hold large portfolios of office, but their new investments are increasingly in residential products,” Branson notes. “Given the continued housing shortages, they will likely be a favorite for some time.”