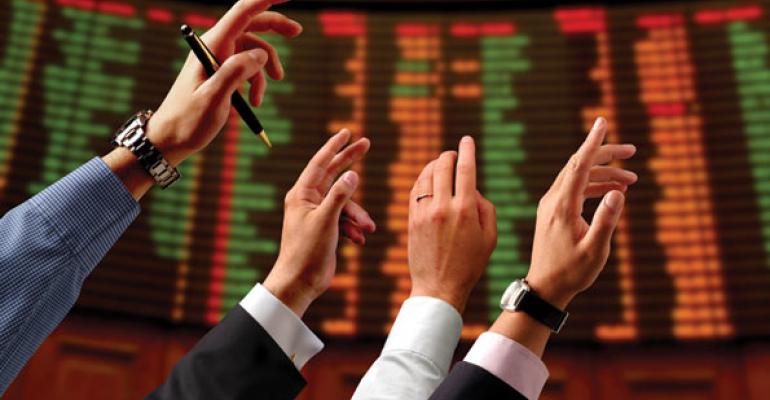 Is It Prime Time for Event Driven ETPs?

There are some, but not many, event driven ETFs to hedge your bets.

Some investors might have thought self-help guru W. Clement Stone had hedge funds in mind when he said, “Events tend to recur in cycles.”

With signs of a recovery flickering, investors and advisors now wonder if the level of corporate transactions is likely to rise in the coming year. An expansive economy would likely broaden the opportunity set for ED funds. To see how, you first need to appreciate the manifold strategies within the ED universe.

Merger arbitrage portfolios trade in the equity and equity-related instruments of companies engaged in corporate transactions. Merger arbitrage funds exploit announced merger and acquisition (M&A) deals, typically with limited or no exposure to pre- and post-date situations. Simply put, these funds are quite opportunistic -- they hold positions only as long as M&A deals are pending; once a deal is completed or broken, they’re out. These funds may engage in international transactions which incorporate hedges to dampen foreign exchange exposure. Additional hedging activity, typically through derivatives such as swaps or futures, may be employed to suppress systematic market risk. Merger arbitrage funds typically have more than 75 percent of their portfolios weighted in announced transactions with the balance held in cash, cash equivalents and hedge positions.

Distressed restructuring funds make plays on corporate fixed-income instruments, primarily the corporate credits of companies trading at significant discounts to their value at issuance or par value at maturity. These discounts often develop as a result of actual or anticipated bankruptcy proceedings. Portfolio runners may be actively involved with the management of the affected companies, most often by sitting on the creditors' committees that negotiate the exchange of securities for alternative obligations such as debt and equity swaps or hybrid securities.

Private Issue/Regulation D strategies concentrate on the equity and equity-related instruments of companies which are primarily private and illiquid in nature. Positions are often undertaken to realize an investment premium for holding the securities until a catalytic event, such as a security issuance or emergence from bankruptcy, occurs. These funds typically maintain more than half of their portfolios in private securities, including Reg. D or PIPE (private investments in public equities) issues.

Less common are strategies involving credit arbitrage, special situations and “activism.” Credit arbitrage funds attempt to isolate attractive opportunities in corporate fixed-income securities, including senior and subordinated obligations, bank debt and other credits. Positions, by virtue of hedging, are often structured with little or no broad credit market exposure and are geared to appreciate as the issuer’s creditworthiness improves.

Managers of activist fundsattempt to obtain representation on a company's board of directors to influence the firm’s policies or strategic direction. By advocating asset sales, corporate divestitures, dividend or share buybacks, and changes in management, activist managers hope to drive up the value of their equity and equity-related positions. 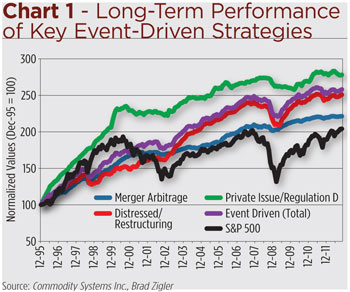 Transaction volume for global M&A activity has fallen off recently, negatively impacting merger arbitrage portfolios. The deal environment is muted because corporate decision makers areto delaying actions as they look for further signs of market stability and certainty. Still, support for an M&A rebound exists in the medium- to long-term, so portfolio runners are positioning their funds to be long on a number of event and pre-event situations.

Distressed and restructuring situations particularly have been well supported by the broad market’s overall positive tone. Activist funds, as well, have benefited from equity- and credit-sensitive exposures as they participated in transformational deals, breakups and divestitures.

Credit strategies, meantime, have exhibited strength in light of continued supportive technical strength and increased risk sentiment. Positions trading at or near target levels were closed to capture gains as markets headed into the usually thinly-traded summer further building up cash hoards. 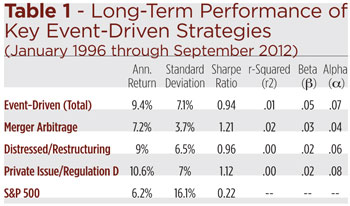 So what kind of opportunities motivate ED fund managers to sock away all that cash?

Shakespeare tells us that the “past is prologue,” but we must temper that with the regulators’ admonition that past performance doesn’t guarantee future results. That said, a look at key ED key strategies’ performance gives us an idea of what these funds can do relative to the general market (see Chart 1 and Table 1).

Over a 15-year horizon, ED strategies have outperformed the broad stock market with little correlation and much less volatility. They’ve all earned positive alpha. Note, however, that ED funds don’t always hit home runs -- all except private issue/Regulation D portfolios underperformed the S&P 500 from 1996 until early 2001. ED managers just got on base often enough to build up a substantial lead.

Enticing as this may be, not everyone is suited to invest in the rarefied atmosphere of hedge funds. There are, however, some exchange-traded products that permit investors to gain access to the ED space. Unfortunately, they presently ply just only one strategy -- merger arbitrage.

MNA (IQ Hedge Merger Arbitrage ETF) - The index tracked by this fund represents investment in global companies for which there has been a public announcement of a takeover. MNA only buys the shares of acquisition targets; it doesn’t sell shares short. However, the fund does undertake short exposure to global equities -- in the form of futures contracts and swap agreements -- as a partial market hedge.

The fund’s long positions in its top ten issues, together with its cash holdings, constitute more than two-thirds of the portfolio asset base.

If there’s an insufficient number of target companies in which to invest or if there’s insufficient liquidity to accommodate investment per index rules, the fund’s available cash is invested in fixed-income securities. At last look, the portfolio’s cash and cash equivalent position was its second-largest long holding at 7.7 percent.

The notional value of short hedge positions in S&P 500 and MSCI EAFE futures totals 16.5 percent of the portfolio’s capitalization.

During the most recent fiscal year, the fund’s portfolio turnover rate was 365 percent of the average value of its portfolio. The fund’s high turnover rate increases transaction costs and lowers its return. 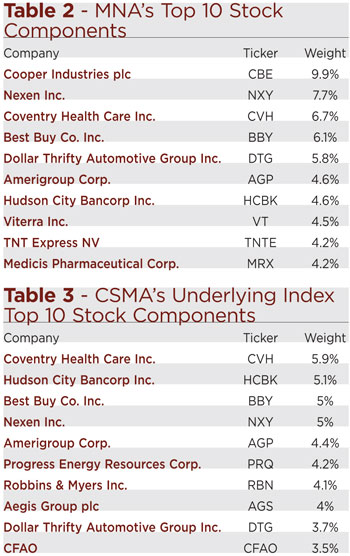 The note’s underlying index is a quantitative benchmark built on a dynamic basket of securities held long and short that reflects publicly announced merger and acquisition transactions. The index attempts to capture the spread between the price at which the stock of the target company trades after an acquisition proposal is announced and the price which the acquiring company has offered to pay for the target. The spread normally arises from the uncertainty that the announced merger or acquisition will close, and if it closes, that the transaction will take place at the proposed terms. In successful transactions, the spread approaches zero by the transaction closing date. The size of the spread itself depends on the perceived risk of the deal closing, as well as the length of time expected until completion.

The index methodology includes a number of constraints that narrows the deal universe. First, there’s geography: The deals include only North American and Western European mergers and acquisitions that meet certain liquidity and arbitrage criteria. Additionally, the acquirer’s stock must be “easy to borrow.”

Turnover is controlled through the index rebalancing procedures. Deals are also asset-weighted and capped (the maximum weight of an individual issue is 7.5 percent); short exposure is also constrained.

Presently, four of the index long positions, including the two weightiest stocks, are paired against short sales. Coventry Health Care’s opposite is Aetna Inc. (AET) and Hudson City Bancorp is set against M & T Bank Corp. (MTB). The total weight of short stock positions in the index is currently -13.4 percent. Cash currently represents the largest component of the index. 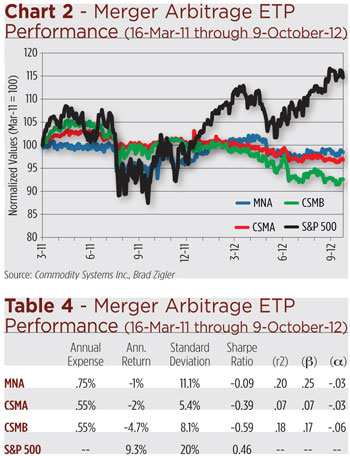 Besides the leverage factor, there’s another essential difference between the CSMA and CSMB notes. The CSMA notes mature in October 2020; the leveraged paper winds down in March 2031.

Because of CSMB’s base and compounding, the note will not track as merely a double dose of CSMA. Over time, the relationship of the two ETNs tends, in fact, to break down.

Rebalancing can impair the ETN’s performance if the index experiences volatility from month to month. At higher ranges of volatility, there’s a significant chance of loss even if the performance of the index is flat.  You can see how the relationship between CSMA and CSMB vacillates in Chart 2.

Clearly, the recent performance of the merger arbitrage products has been less than stellar. But look back at their 15-year history in Chart 1 and you’ll see the strategy underperformed the overall market for some time before moving to a premium. The eventual outperformance was facilitated largely by the funds’ low volatility. Largely, merger arbitrage funds didn’t give up their gains as readily as the broad market.

What investors and their advisors have to ponder now is the prospect for a step-up in economic activity. Corporate executives are likely to increase M&A activity and security issuance when the economy shows definitive signs of sustainable growth. Event driven funds tend to thrive in such resurgent environments.

A clue about the prospects for a turnaround is the volume of new ED products in registration. Presently three new exchange-traded funds -- one activist, one tracking distressed securities and yet another merger arbitrage portfolio -- await clearance from the SEC.  Take what you want from that. It’s not a lot, but it’s not zero either.