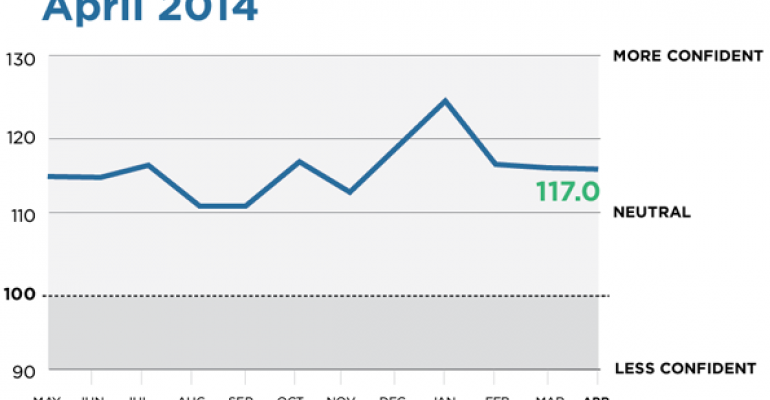 Financial advisors responding to Wealthmanagement.com’s monthly survey on the economy and the markets are at once gaining confidence in the current economy while their optimism in the equity markets wanes.

Financial advisors’ confidence remained relatively flat in April, while increased optimism in the current state of the economy was offset by a weakening conviction in the near-term future of the stock market.

According to the Wealthmanagement.com Advisor Confidence Index (ACI), a monthly survey of nearly 300 independent financial advisors, advisor confidence came in at 117.06, virtually unchanged from last month’s reading of 117.16.

Yet advisors grew more confident in the current state of the economy; that component of the ACI was up 1.1 percent for the month. Their optimism about the state of equity markets in the short-term, however, fell 1.7 percent, still in positive territory but the lowest reading year-to-date. Confidence in the state of the equity markets has fallen nearly 6 percent since January.

“I believe the economy will keep improving while the markets remain relatively flat, at least for the next 6 months. I see the markets improving next fall once we've had more positive increases from the economy,” said Jon Larson of Albion Financial in Salt Lake City, Utah.

Many advisors expressed a belief that equity markets would be volatile through the remainder of the year, with some even predicting no clear market direction until the 2016 presidential elections. In the near term, advisors said the most potent risk would be a further escalation of the Russia-Ukranian conflict.

Many advisors were looking at the Federal Reserve’s imminent tapering of monetary stimulus programs and an inevitable increase in interest rates as an inflection point. “The Fed will continue to taper and hold off on raising rates until 2015. The result will be positive for the markets,” predicted Douglas Stone of SeaCrest Wealth Management in Medford, Oregon.

For some advisors, the current volatility in equity markets is a good thing. "The current 'momentum stock meltdown' is healthy as it will get investors refocused on real companies with real balance sheets and real earnings,” said Jonathan Foster of Angeles Wealth Management in Santa Monica. 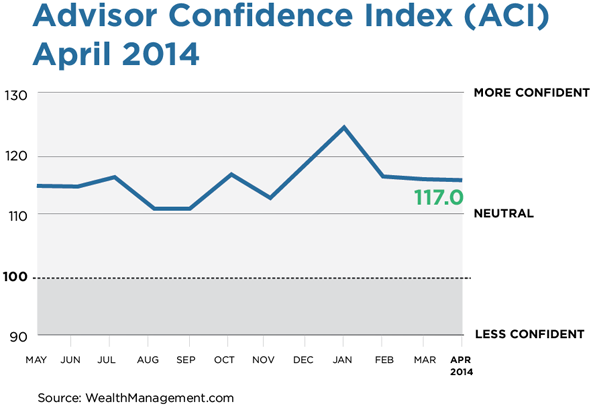 Here, in response to the Wealthmanagement.com monthly Advisor Confidence Index survey, a collection of independent financial advisors’ opinions on the markets and the economy in April:

“Valuation seems to favor foreign markets and in particular the emerging markets and developed Europe, but valuation is a poor tool for timing inflection points. Still overweight equities and U.S. in particular, but looking for the catalyst to go heavier outside the U.S.” Rick Thoreson, Thoreson Steffes.

“A lack of quality job growth, a weak middle class that will further drag down consumer spending and lack of leadership in Washington will lead to, at best, a muddled economy and little to no growth.” Mark Willoughby, CapWealth Advisors.

“I am very negative on intermediate and long bonds, although I expect they may trade up in price within the next nine to twelve months. I expect both will be down substantially within the next twenty-four months. I am mildly positive on the equity side in the twenty-four to thirty-six month timeframe, negative in the short run, and very bullish long term.” Leonard Kingsley, WSFS Private Wealth.

“We are encouraged by the continuing economic recovery and by signals that the Fed will be more flexible with respect to policy decisions, but this optimism is tempered by concern that the Russia-Ukraine conflict will turn into a larger crisis,” Karim Ahamed, HPM Partners.

“Elections will not have as great an influence on the markets as the public would perceive. There is still plenty of buying opportunity with significant amounts of cash on the sideline,” Robert Lindner, Lindner Capital Advisors.

“Lower deficit, higher revenues, no new spending, corporate earnings remain good. We could have a correction short-term, but expect markets to be higher at year end.” Robert Cochran, PDS Planning.

“The economy is not strong enough to sustain a stock market which has appreciated close to 50 percent in the past two years.” Scott Shubert, Blue Granite Capital.

“Seasonal patterns will temper market gains the next six months. We are about to enter the worst six months for the market. Additionally, history has shows that the during a mid-term election year (second year of four-year election cycle) is most trying. Better to be more conservative until the fall,” Kenny Landgraf, Kenjol Capital Management.

“I have been recommending to clients that after a five year bull market in equities that a defensive posture is prudent,” Li Chang, KAM Advisors.

“Headline numbers continue to be positive. Under the surface there is a growing split between those Americans who are doing well and those who have fallen below the radar. Financial inequality is growing, which I find alarming and a point of concern,” Eve Kaplan, Kaplan Financial Advisors.

“Fed monetary policy continues to push investors further and further out on their personal investment risk spectrums. Additionally, with investor sentiment at extremely high levels and markets close to all-time highs, it is likely the time for investors adopt a risk off philosophy when the herd is clearly risk on,” Paul Bennett, United Capital Private Wealth Counseling.

“The U.S. stock market seems to be in neutral for several reasons. Mixed economic data, concern of Fed movements, Ukraine. and more. We seem to remain in a bifurcated world where the majority of people are treading water and the top tier is feeling good about life,” Joseph Sheehan, Moneta Group.

“I believe that we are facing long-term structural unemployment problems. As a result it will be very difficult for our unemployment to recover to less than 6 percent for many years. Therefore, Janet Yellen and the Fed will have further reasons to keep interest rates low for a long time, even if they finally end the QE program later this year.” Edward Kohlhepp, Sr., Kohlhepp Investment Advisors.

“I am expecting a pullback that is overdue, though it may not happen until Fed tapering concludes.” Nicholas Phelps, Phelps Financial Advisors.

“2014 will be a transitional year where fundamentals will matter more. Given recent momentum, the markets may have a digestion period to allow for fundamentals to catch up with equity levels. Recent corporate guidance has not been great. In addition, earnings forecasts have started to come down. Central bank policy, geopolitical risks and moderating growth out of China may contribute additional dark clouds over the broader global macro economy and capital markets.”Christian Hviid, Point Guard Capital.