/sites/all/themes/penton_subtheme_wealthmanagement/images/logos/footer.png
Recent
Recent
Seven Tips to Help Financial Advisor Firms Protect their Customer Lists
May 20, 2022
Nine Must Reads for the CRE Industry Today (May 20, 2022)
May 19, 2022
Dondero’s NexPoint Targets More Than $1 Billion for New Wager on Single-Family Rentals
May 19, 2022
SEC Judges’ Constitutional Cloud Darkens After Appeal Ruling
May 19, 2022
Featured
The 10 Best and 10 Worst States in Which to Retire in 2021
Jul 15, 2021
Poll: 15 Classic Books on Investing and the Markets
Apr 03, 2020
Fifteen Must-Listen Business Podcasts for Advisors
Aug 14, 2020
Celebrity Estates: Jay Leno and Planning for Classic Car Collections
Feb 22, 2022
Advisor Confidence Index (ACI)
brought to you by 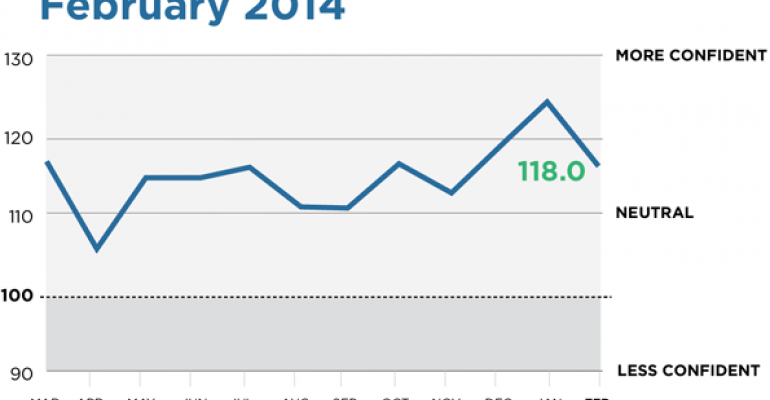 Financial advisors say their optimism over the state of the economy and the future of the equity markets, while still positive, has waned in the past month.

As the stock market reached new highs in the wake of a continuing bull market, financial advisors’ confidence in the U.S. economy and the future of equities slipped during the month of February.

Advisors surveyed in Wealthmanagement.com’s monthly Advisor Confidence Index said their overall optimism in the economy and the markets, while still in positive territory, fell to a level of 118 (over 100 equals confident, under 100 equals pessimistic). That’s the largest single month drop since April 2013.

Some 150 financial advisors are surveyed monthly by Wealthmanagement.com to get their views on the state of the economy and the markets, both now and in the near future.

In February, advisors reversed a two-month trend of increasing optimism, pointing to stock market valuations that have gotten too lofty, particularly in the technology space, as well as the Federal Reserve’s imminent plans for tapering off the stimulus that many believe helped propel stock prices past their proper valuations.

“The stock market is well ahead of the economic fundamentals, so a more serious correction is likely in the cards later this year,” said David Ware, an advisor with Barrington Wealth Management.

“The US Stock Market is an area of caution and concern for me. The last decline in the equity markets bottomed in 2009. Historically, US markets have experienced a major decline every 4 years. Cycle theory suggests that advances that extend beyond the norm are usually followed by more forceful declines,” said Kevin Stockton, Horter Investment Management.

All four components of the Wealthmanagement.com Advisor Confidence Index fell in February. 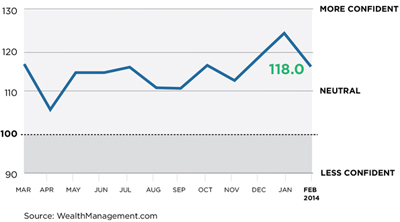 While advisors’ confidence dropped from the previous month, it was still in positive territory. Many advisors cautioned that volatility would be the norm for 2014, and that the market can’t expect gains similar to the previous year.

“Markets have gone delusional because of the belief quantitative easing will levitate stock prices forever after. Biotech sector and concept stocks like Tesla remind me of 1999,” said David Walter of Halberstadt Financial Consultants. Indeed, the survey closed on the day the tech-heavy Nasdaq exchance reached its highest level since 2000 when markets were experiencing a bubble in technology stocks.

Still, many say the economy is improving, albeit slowly. “The US stock market may retrench again in the coming six months, but I am positive global equities in terms of both absolute performance and performance relative to other major asset classes,” said Eve Kaplan, of Kaplan Financial Advisors.