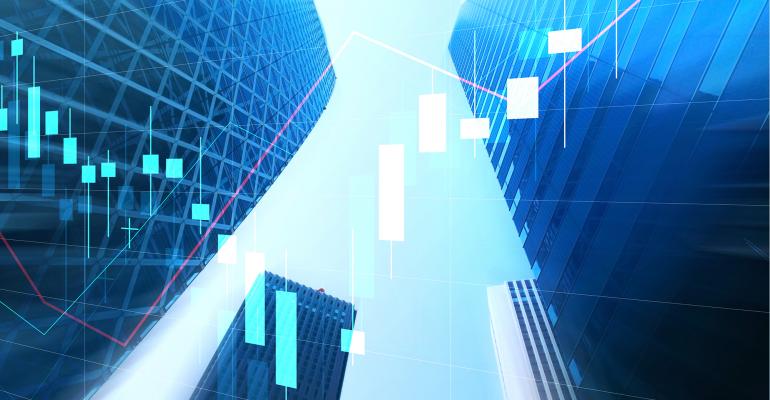 REIT total returns are now up more than 25 percent year-to-date as their strong bounceback year continues.

The FTSE Nareit All Equity REITs Index rose 4.36 in July, pushing year-to-date returns for the index over 25 percent as publicly-traded REITs across all sectors continued their strong recent runs. The only blemishes for the month came from lodging REITs (down 5.93 percent) and regional mall REITS (2.62 percent) as the rise of the Delta COVID-19 variant took some of the wind out of the sails of the broader economy. Still, both sectors remain up year-to-date, with lodging REITs up 10.33 percent and regional mall REITs up 50.77 percent.

Residential REITs led the way in the month, with total returns up 10.86 percent overall and 41.46 year-to-date. That strength is evident in all three of the segment’s subsectors with apartment REITs up 10.86 percent, manufactured home REITs up 13.56 percent and single-family rental REITs up 8.76 percent. For the year, those sectors are up 44.20 percent, 32.32 percent and 39.30 percent, respectively.

In addition to the strong market performance, there was another bit of good news for publicly-traded REITs this month with the publication of new research comparing the “returns of individual private funds with either U.S. or international investments against either U.S. or international equity REIT indexes over each private fund’s investment horizon.” According to the research, in the U.S., REIT returns beat private equity real estate risk-adjusted returns by 590 basis points and won 68 percent of “head-to-head matchups,” i.e., situations in which a REIT and a private equity real estate (PERE) fund had similar strategies. In global funds, REIT returns beat private equity returns by an average of 619 basis points and also won 68 percent of head-to-head matchups.

The research was conducted by Thomas R. Arnold, David C. Ling, and Andy Naranjo. Arnold is the former global head of real estate with the Abu Dhabi Investment Authority. Ling and Naranjo are both professors specializing in real estate at the University of Florida.

WMRE sat down with Nareit Executive Vice President and Economist John Worth to discuss July’s returns and to touch on the new research.

WMRE: Can you talk first briefly about the research?

John Worth: The reason we encouraged the authors to do this study was, firstly, we knew they had this unique dataset and a unique approach that would allow them to run these head-to-head comparisons. For a given investor in a given PERE fund, how would they have done if they had invested instead in REITs or other listed real estate equities? So, this was not just looking at indexes over time…. The addition of Tom Arnold, who has been around the real estate world for decades and run billions of dollars’ worth of real estate, is unique and noteworthy.

The key finding was that REITs outperformed PERE funds. The study looked at 375 U.S. and 255 international PERE closed-end funds with vintages between 2000 and 2014. The data encompasses over 200 managers and $480 billion in combined AUM. So it’s a broad-based look across PERE funds.

The bottom line is in the U.S., REIT returns exceeded PERE funds by 590 basis points and won almost 70 percent of the matchups. If you don’t risk adjust, REITs won 53 percent of the time and outperformed by 165 basis points. But it’s important to make the risk adjustment and factor in illiqiduity as a cost.

Globally, the results are very similar, with REIT returns exceeding by 619 basis points and winning 68 percent of matchups.

WMRE: Where did the dataset come from?

John Worth: They pulled the data from Cambridge Associates and cleaned up that data, did some analytics to make sure they can make an accurate comparison between the way returns are reported. And then completed the REIT comparisons. And this is also net of fees.

I like that this is a simplistic horse race. For an institutional investment manager it shows what percent of the time they would have been better off with a REIT strategy. It’s a nice bottom line. I want the vehicle that’s going to give me the better returns more frequently.

WMRE: It will be interesting to dive further into that research. Can we now pivot to July results? It looks like it was another strong month of total returns almost across the board.

John Worth: Yes. It was a very strong month for REIT returns, which were up 4.3 percent, compared to the S&P 500, up 2.38 percent. So it was strong relative and absolute performance.

Residential led the way, up 10.8 percent with apartments driving that overall strong number. It’s consistent with the broad-based performance in residential real estate. Single-family home sales are strong and so is the demand for rental housing. Some of this is also a reflection that the concerns about multifamily and whether there would be demand for downtown CBD living turned out to be overblown.

The numbers are also reflecting the broader improvement in the economy. That’s driving a lot of demand for all types of housing. And construction of housing has lagged population growth for more than a decade. Many estimates we are seeing suggest we are several million units short of the stock of housing that we would need for our population. So, the supply/demand imbalance suggests unit prices for buying and renting will be bid up.

WMRE: What about other sectors?

WMRE: It’s interesting to me that office REITs were up for the month, given there has been some shifting in return-to-office timelines that have been announced amid the Delta uptick.

John Worth: A lot of those announcements have come very recently. So the full weight of those impacts was not in the July numbers. And it’s a bit too early to be looking at August results yet, but we are not seeing a broad-based selloff.

I think investors understand that you can have people returning in September, October, November or even later and that’s not going to impact companies’ near-term ability to pay rent. And really what’s important for office markets is that companies are ultimately committed to returning and having a large percentage of their employees return. There can be hiccups, but what we are not seeing is anyone saying they are rethinking their commitment to wanting to run their teams in person. That’s still the long-term trajectory.

WMRE: That makes sense. What about with lodging REITs, which were down for the month?

John Worth: Investors are still trying to figure out the pace of recovery. Leisure has come back. The question remains as to how quickly business and group travel comes back. And July results perhaps reflect a little more pessimism on the speed of recovery on those kinds of travel. We have seen a couple of conferences that were planned for in-person moving to virtual or hybrid mode and some large events canceled. In addition, the return of business travel might mirror what’s happening with offices. If you are not in the office, you are not likely traveling for work either. So, delays going back to the office might signal delays in the return in transient business travel.