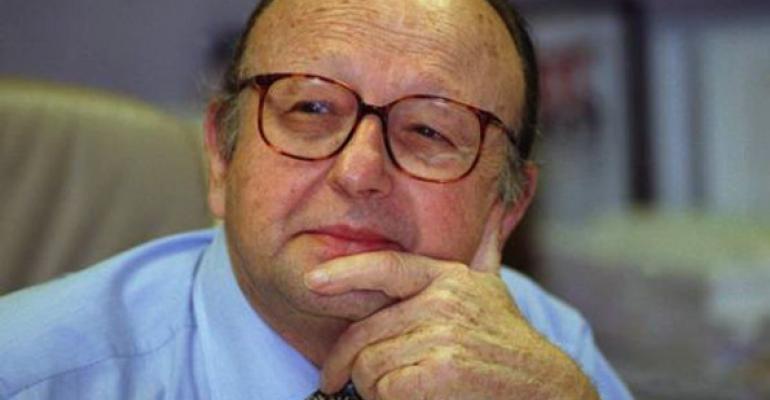 One of the first things Milton Cooper does after I walk into his office on a cold November morning is ask about the latest books I’ve read. I mention a few titles. With a smile, he promptly rattles off the names and authors of five books he has read. And I get the impression that he’s finished them all very recently.

He then peppers me with so many questions about my life and work that for a moment it feels like I traveled to Long Island for Cooper to interview me rather than vice versa. It’s a gift he has—making people feel at ease in his presence. And it’s part of what’s made him so successful—being the kind of person that others want to deal with on an ongoing basis.

Today, Cooper, who is 81, is executive chairman of New Hyde Park, N.Y.-based Kimco Realty Corp., a shopping center REIT he helped build from scratch starting in 1958 with longtime partner Marty Kimmel. (Kimmel retired in 1991 and passed away at age 92 in April 2008). He led the firm for much of its existence, from its modest beginnings with a single shopping center anchored by a Zayre discount store to a behemoth that today owns nearly 1,500 properties globally.

In addition to being exceptionally affable and quickly making me feel at ease in his company, Cooper doesn’t convey an iota of arrogance despite being one of the true giants of the commercial real estate world. His office is not ostentatious. He does not need to surround himself with luxuries in order to convey his stature. Cooper’s office décor includes family photos, assorted industry awards and a collection of music boxes that Sam Zell sent over the years as annual gifts.

It’s the type of office where clearly work gets done. And it becomes apparent to me at that point that Cooper’s transition out of the CEO role did not end his day-to-day involvement in the fortunes of Kimco Realty.

In fact, in the midst of our interview, current CEO David Henry—a man Cooper recruited to replace him a decade ago—comes in to consult with Cooper on locating a key contact for the firm. The moment seems almost scripted to hammer home the point that the two remain close collaborators in running one supremely successful ship.

In 1991, Kimco became one of the first commercial real estate firms to go public and conduct a REIT IPO—a process that Cooper remembers as being a tough sell.

At the time of the IPO, Kimco operated 126 shopping centers in 23 states. The Westernmost property sat in Texas. Today, Kimco owns interests in 948 shopping centers in 44 states—including Hawaii and Alaska—as well as Brazil, Canada, Chile, Mexico and Peru.

During its time as a REIT, Kimco has been remarkably agile. It’s operated on a few fairly straightforward principles. Firstly, Cooper has created a corporate culture that insists Kimco should be a company that people want to do business with. Secondly, the firm has sought opportunities that allow it to recognize yields that exceed its cost of capital. During times when the cost of capital has been high or yields low, Kimco has shown creativity by employing joint ventures, partnerships, investments abroad and use of taxable REIT subsidiaries.

That’s not to say that Cooper is all business, by the way. He happens to be a big family man. In fact, nearly all of his children and grandchildren live within one mile of his home. He’s also an avid tennis player and participates in singles matches three times a week. And, of course, he is a voracious reader. In fact, at the end of our interview he hands me one of his recent reads, “Hub Fans Bid Kid Adieu,” by John Updike—a book about Boston Red Sox immortal Ted Williams.

Below is a transcript of our conversation.

How did you get into retail real estate and why did you make a career out of it?

I was a lawyer for an estate in Florida. They knew a contractor that knew a discounter out of New England called Zayre. And I arranged a group of the law partners and clients of the firm to purchase the property and build it. There was no financing available. So it had to be built without a mortgage. The total rent was $1 per square foot. Costs were $7 per square foot. It was a time before a dramatic growth in land values and a time before inflation escalated construction costs.

I thought it was a wonderful instrument. The ownership of shopping centers with long-term leases is wonderful because the rent stream was your debt service and the percentage clause and the residuals, your conversion rights.

We had no end of problems with the construction. But then I had the opportunity to do further development and I knew I didn’t have the expertise in construction. Marty Kimmel, was one of the partners in the firm that I was associated with. I asked him if he wanted to be my partner. At that time he was in California. He got on the next plane. We never had a written agreement—simply a handshake. It was a longstanding partnership.

We then developed additional shopping centers. We went through the cycles of manic depressive swings of capital where it was ebullient one moment and then it disappeared and we decided that we wanted non-tempermental capital. In 1991, we had an IPO, which was a very tough sell. The total offering was $148 million. The dividend yield was 8.6 percent. It was a multiple of about 8 times our projected FFO and with all of that, it was still a very tough sell.

This was still early on, before the REIT revolution?

That is exactly right. And I think for a day or two, it traded down. It was not an easy sell.

Do you think that was because people were worried about real estate?

There was an antipathy towards real estate. Real estate was the cause—in the mind of the investor—of the failure of the Savings and Loans. They didn’t distinguish between housing subdivisions and commercial real estate.

You talked about it being a tough sell at the period, from your start up to today, Kimco has continued to grow.

It’s not just us. The markets started to favor public real estate companies. They really saw the value that being able to liquefy real estate offered. It was just really the very concept that individuals could own pieces of real estate.

Do you consider yourself to have any kind of business philosophy?

I’d say follow the Golden Rule. Treat everyone the way you want to be treated. And conduct yourself in a way that people want to do business with you—not that they have to—that they want to. They feel comfortable. They trust you.

Do you think the REIT structure is beneficial for commercial real estate and for Kimco specifically?

I’ve been struck by Kimco’s creativity. How much a part of the strategy has it been to constantly look for opportunities?

A public company should invest the money that shareholders trust them with at a spread to its cost of capital. That way, when yields compress to a point where the returns are not in excess of your cost of capital, you had to find places where the returns are higher. So we went to Canada because Canada had the same credits at higher cap rates and lower interest rates. Mexico had very substantial yields. The joint ventures gave us the opportunity to enhance lower yields with the profit on management fees.

So it really was borne out of the necessity to deliver yields at excess of the capital. That can change. Maybe the cost of capital declines to the point where you can find properties that have a spread. When we first went public, it was a picnic. We didn’t have competition. There were very few other public companies where you could get double-digit cash-on-cash returns—cap rates were high. It was wonderful. Then with competition, that climate disappeared. So it really was the case of necessity being the mother of invention. It continues to be the same today.

Can you talk about bringing in Mr. Henry and what it meant to be stepping back from the CEO post?

For a pretty good stretch of time you worked closely together.

It’s an old expression that while the legal entity may be corporate, our philosophy was that of partners. You forget about the titles and you function as partners.

What went into making the transition official?

Timing. It has not changed much of what we do. We participate as partners and do what we think we do best.

So you remain hands on.

We all are. One of the things that you asked about was REITs and REITs have benefited by the fact that their very founders were entrepreneurs and they had real estate people who were practical and had high standards. When you think about it, REIT management has been a poster child for fairly good covenants, governance and integrity. You don’t have Enrons, Worldcoms, none of that. The few bankruptcies before GGP were mortgage REITs where they had mismatching of short-term debt with long-term liabilities. The ones that went bust were Chase REIT, etc. They were run by banks, not individuals.

As you look around at other REITs, are there other firms or individuals that you admire?

There are wonderful individuals. Sam Zell. Ed Lindy was a great leader. Mort Zuckerman is a good leader. You have Steve Roth. You have Richard Saltzman guiding in the field of advising REITs. And David Simon. There are a lot of good people.

In connection with shopping centers with strong tenants with long-term leases, it’s my view that [they are] mispriced and cap rates are too high. If you have a property that’s under a long-term lease to Walmart, the spread between the long-term Walmart bond and the cap rate is too high. I grant you, the bond may have liquidity. The real estate does not. (Except if it’s in a REIT form, then it has partial liquidity.) But what you have to compensate for that is some inflation protection in the residual, some partial tax shelter because of depreciation and, on balance, the spread is too high. It’s a mispriced asset.

Is that because people are overreacting they’ve seen?

What opportunities do you see in the sector given some of the demographic and population trends? Are there opportunities in both urban areas and suburbs?

It’s going to be in the United States where you have population growth of 3 million people a year. At the end of 10 years, that is like adding another Canada or another Australia. With that growth, the values on shopping centers should increase. … You really have to look at what your present cashflows are on a property and where you think they’ll be going over the next 10 years. . That’s your job. To find opportunities where cashflow can increase, whether it’s urban, suburban, discounters, groceries, warehouse clubs, whatever.

What do you want people to think, when they see the name Kimco?

We care about our people and our customers. And, of course, the Golden Rule.