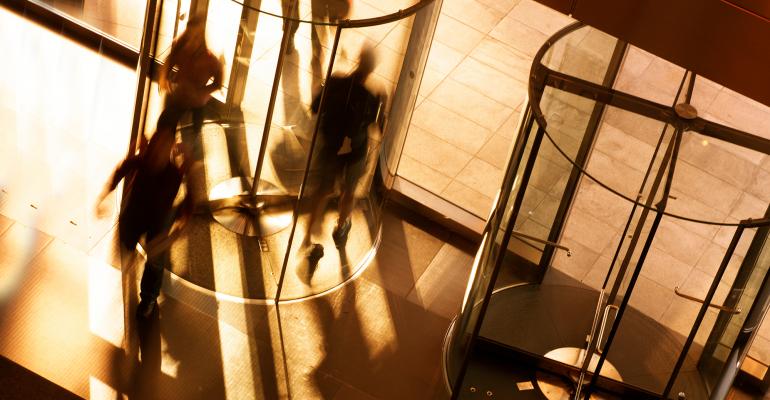 “The stance of dramatically reducing office space as a result [of the pandemic] has softened in recent months,” notes one market observer.

Initially, office-using employers were expected to begin a return to the office after Labor Day. However, that timeline now appears to be accelerating. Firms ranging from JP Morgan to Google have moved up their return dates. “A faster-than-expected vaccine roll-out and removal of restrictions in many gateway geographies has resulted in a number of high-profile financial services tenants pushing up their return-to-work expectations to mid-summer,” says Eric Enloe, managing director for valuation and advisory services with real estate services firm JLL.

An April Global Occupier Survey administered by real estate services firm CBRE found that office-using companies anticipate a return to a more normal level of office occupancy as 2021 progresses, according to Julie Whelan, head of occupier research for the Americas with the firm. “A slow wave of employees will return over the summer and ramp up in the fall once new routines can be put in place,” she says. But Whelan cautions that pre-pandemic occupancy levels are unlikely to be reached in the near-term.

Implementing new workplace designs, sorting out hybrid schedules and accommodating parents whose children may still be learning remotely will continue to impact the rate of which companies bring their employees back to the office at scale, notes Enloe.

In addition, employer policies and office re-entry schedules currently vary by both industry and geography, he adds. “Tech tenants generally continue to adopt more incremental and voluntary re-entry schedules that will progressively increase office capacity through early September. Tech firms overall seem to be putting less urgency on employees getting back to the office quickly in contrast to some financial services and banking institutions who are targeting a return this summer.” In addition, tech firms seem to be instituting more policies that will allow hybrid schedules compared to some other tenant groups.

Enloe also notes that office re-entry appears to be happening faster in Sun Belt metro areas, which are already seeing 35 to 45 percent re-entry rates, while New York, San Francisco and Chicago, among other gateway markets, are currently at 15 to 25 percent. With many financial institutions now headquartered in Southern markets, he notes, “This means that the faster re-entry from financial, insurance and similar traditional office-occupying industry tenants that we are now seeing will lead to more geographic parity in the months ahead.”

But the trend toward hybrid work policies among major office occupiers, including tech companies and accounting firms like KPMG and PwC, isn’t expected to reduce demand for office space over the long haul or investor interest in office assets.

“The stance of dramatically reducing office space as a result [of the pandemic] has softened in recent months,” suggests Whelan. Enloe agrees that the office will remain the center of the work ecosystem, even with potentially greater flexibility for employees to work from home some days of the work week.

While the direction of office demand remain uncertain, through the second half of 2020, investors prioritized stability and income durability when considering assets for acquisition, notes Enloe.

This manifested in heightened liquidity for well-occupied assets and generated premium pricing for buildings with long remaining lease terms. But “while those trends remained in place through the first quarter of 2021, greater clarity around company re-entry is enabling granularity in evaluating office assets’ rent rolls” he continues.

During the 12 months that ended in March, office investment sales volume in the U.S. fell by 48 percent compared to the year before, to a little over $77 billion, according to real estate data firm Real Capital Analytics (RCA). At the same time, RCA’s Commercial Property Price Index (CPPI) for office properties in Central Business Districts declined by just 0.1 percent over the past year, while its CPPI for suburban office assets rose by 2.2 percent.

In the short-term, there continues to be some concern about office tenants downsizing. In the longer term, investors believe companies will occupy their pre-COVID-19 footprint or even grow, says Russell Ingrum, CBRE vice chairman for capital markets. This projection is driven by the belief that there is pent-up demand within the existing tenant base due to continued growth of companies.

Ingram notes that for deals on stabilized assets with weighted-average lease terms and credit, investors are primarily looking at cash-on-cash returns, which are very attractive compared to industrial and apartment building acquisitions. “Deals with more risk have been at a premium, so many investors are eyeing these types of acquisitions, because they want to see the positive to deploy capital,” he says. “As deal flow increases, groups will become more discerning, but right now it feels like most are ‘risk-on.’”

As companies increasingly issue guidance for timelines and degrees of office re-entry, Enloe says that investors are using these data points to estimate space needs over the short- and medium-term. He notes that these data points are of particular importance to investors who are looking at secondary or suburban markets with a smaller existing tenant base because they are helping them gauge lease renewal likelihood and to forecast future space needs.

But overall, Ingrum says that uncertainty about the future of the office return hasn’t had an impact on valuations of office building coming to market or being refinanced. “While investors and lenders are watching buildings closely, unless a tenant has already declared they want to reduce their footprint—directly or through sublease, most investors assume the tenant will return to the office at some point this year,” he notes.