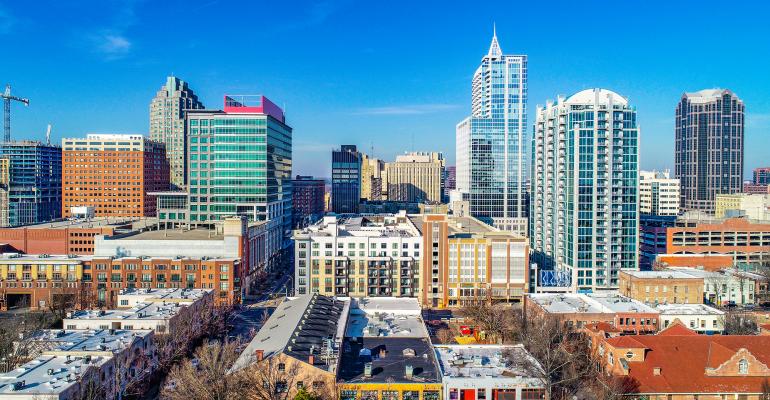 Why More Investors Are Seeking Office Buildings in Secondary Markets

Investors seeking higher yields on office acquisitions than core markets could provide have been realigning their investment strategies to target smaller markets over the last decade, as many Sunbelt cities saw high population growth. The pandemic, which expanded remote working opportunities, at least in the short term, accelerated migration to smaller markets in warm climates with a relatively low cost of living and high quality city life. As a result, employers are following the talent and investors are following the employers.

Highwoods Properties, which focuses class-A properties in fast-growing secondary markets, recently agreed to acquire Preferred Apartment Communities' office portfolio for $769 million, according to a press release. The deal included four class-A office assets with 1.6 million sq. ft in Raleigh and Charlotte, N.C., and a mixed-use redevelopment site in Atlanta slated for up to 600,000 sq. ft. of office space and more than 300 multifamily units. The portfolio also included a mezzanine loan on a newly built office building in Atlanta and a multi-tenant creative office project in Atlanta.

Cohen & Steers, a global investment manager specializing in real assets and alternative income, also announced the formation of a private real estate platform to focus on assets in growing markets. Hamid Tabib, who heads North America real estate acquisitions for the new private real estate platform, notes that the team will be able to invest in direct deals, such as joint ventures and co-investments, fund deals, such as limited partnerships, and entity deals, including investments in REITs and pre-IPO securities.

“We’re taking a value-oriented approach, and this platform provides the flexibility to look at everything out there to find the best opportunities possible across sectors, including retail, office, residential, and lodging,” he says.

Tabib contends that headwinds in larger urban markets are unfavorable right now due to pandemic-related financial problems that will likely result in future tax increases, so his group will focus on growing secondary markets with a relatively low cost of living and favorable tax environments.

“Atlanta, Nashville, Raleigh, Phoenix, Denver, the Texas markets are super attractive and great places to invest in the near-term due to cost of living and population and job growth,” Tabib says. He adds that these smaller cities have invested in their downtowns to create live/work/play environments and cultural amenities that appeal to the millennial demographic.

As millennial talent migrates to these locations, employers will follow and setup co-locations, Tabib suggests. Improved versions of video-conferencing technology developed during the pandemic will allow companies to employ talent no matter where it is located, he says.

A recent report from New York City-based data firm Real Capital Analytics (RCA) shows that Dallas was the market that saw the greatest volume of office construction between the second quarter of 2020 and the first quarter of 2021, above that of Manhattan, which also saw a high level of office construction compared to other cities around the nation. Seattle, Raleigh-Durham, Atlanta and Charlotte posted relatively high levels of office construction as well during the period. Dallas also saw office transactions totaling more than $901 million in the first quarter, while Atlanta saw $521 million in transactions and Raleigh-Durham $345 million. For comparison, sales involving office buildings in Manhattan during the quarter totaled $573 million. In Los Angeles, the figure was $998 million, and in San Francisco more than $1.3 billion.

In addition, RCA’s Commercial Property Price Index (CPPI) for the first quarter showed that price growth on all commercial property types in non-major metros rose to 7.7 percent year-over-year compared to growth of just 4.5 percent for commercial properties in the six major U.S. metros.

Al Pontius, senior vice president with real estate services firm Marcus & Millichap, notes that real estate fund managers and private equity firms, like Philadelphia-based Tourmaline Capital Partners, are also looking at growing secondary markets because they offer a higher return on investment (ROI) than those in gateway cities. Class-A office investments in secondary markets can generate ROI between 6.75 and 7.75 percent due to higher cap rates on acquisitions, compared to core markets like San Francisco, where the average cap rate for “best in class” office assets is still about 4.0 percent.

“There are plenty of office investors, liquidity and billions of dollars seeking office investment, but that changes rapidly as perceived risk grows,” Pontius cautions, noting that the pandemic’s impact on the office sector has created hesitancy among office investors due to uncertainty about future office demand. That’s been particularly in gateway markets.

“Where tenant demand settles in a flexible office environment is widely speculative right now,” he says, citing opposing examples that illustrate the current unpredictability of office tenants’ decisions. A large insurance company in Phoenix, which is consolidating its offices into one location, for example, is vacating 500,000 sq. ft. and relocating into half as much space. A major tech company in San Francisco, on the other hand, will require all of its employees to return to the office to foster collaboration and support mentorship and learning, Pontius notes.

But the migration of millennials to growing secondary markets including Nashville, Charlotte, Memphis, Tenn., Greensboro, N.C., Raleigh, Atlanta, Tampa, Fla., Orlando, Fla., Dallas, and Phoenix, which started long before the pandemic, will expand opportunities for office investors as employers follow the talent. While these markets have always offered a business-friendly environment with fewer barriers to entry and more favorable tax environments for businesses, Pontius notes that over the last decade these cities have made infrastructure improvements to their urban cores that have made them more attractive to younger workers.

Pontius compares this trend to the 1980s, when there was a surge in suburban office demand as baby boomers moved to the suburbs to raise families. “Investors recognize that as millennials start families the demographics are shifting, and they are looking at the markets where people are moving.”

However, different investors favor different secondary markets for a variety of reasons. One Marcus & Millichap client, for example, favors Phoenix over Las Vegas due to its size and population diversity. Dallas, which offers a mix of a suburban and urban environment, is a “go-to market” for many investors because of strong job growth, as many companies move their headquarters there.