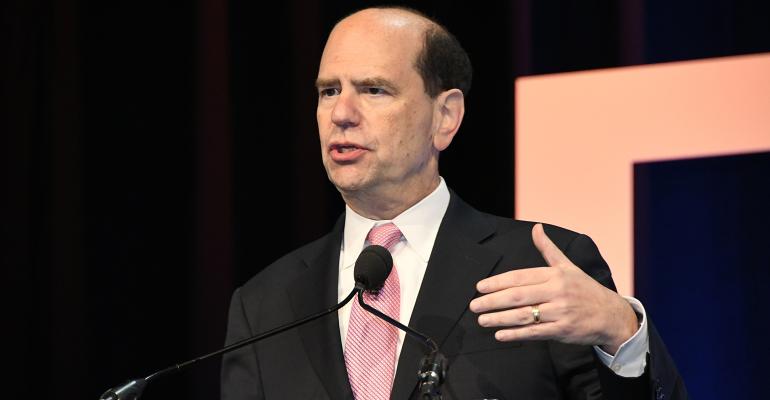 What Advisors Need to Know About Trump’s Tax Plan

The White House released its plan for tax reform this week and its proposals could have major implications for clients and the markets. For the first time in 30 years, we may actually see tax reform come to fruition, said Andy Friedman, principal of The Washington Update, speaking at Raymond James Financial Services’ National Conference for Professional Development in Orlando this week. Friedman gave some 2,000 advisors attending the conference a rundown on what they need to know.

Tax reform can be difficult to get done because most people believe it should be revenue-neutral, meaning it shouldn’t reduce the revenue that the government gets. One thing the administration wants to do to ameliorate this problem is to use something called “dynamic scoring.”

“Dynamic scoring is intended to take into account the fact that if you lower taxes, businesses grow, and when businesses grow, that means they pay more in taxes and the government earns the money back,” Friedman said.

The other thing the administration is looking to do is to reform health care first. If you fix or change the Affordable Care Act, you eliminate all the taxes that are under it, such as the 3.8 percent surtax on investments.

“If you get rid of those taxes before you start tax reform, that’s less revenue you have raised in tax reform to come out equal.”

So, what has Trump proposed? On the individual side, he would lower the top tax rate to 35 percent from 40 percent, Friedman said. The tax rate on capital gains and dividends would be 20 percent, and he would double the standard deductions so people wouldn’t have to itemize as often.

The White House plan also includes a repeal of the 3.8 percent surtax in the ACA, assuming that hasn’t been repealed. The plan would eliminate the alternative minimum tax and repeal the estate tax.

As far as the estate tax goes, it’s uncertain whether we’d see a repeal of stepped-up basis. Right now, if someone passes away, they might owe the estate tax, but their kids or grandkids won’t owe capital gains taxes on the appreciation of inherited assets when they sell those assets. We don’t know whether we’ll see a reverse of that, where if someone dies, they don’t owe estate taxes, but heirs would owe capital gains taxes.

Trump also has a proposal to eliminate all itemized deductions other than mortgage interest and charitable contributions. That would mean eliminating the deduction for state and local taxes.

While the White House’s plan didn’t mention this, Friedman expects we’ll likely see some loophole closures — technical provisions that Congress feels it can change to bring in some additional revenue. One example would be stretch IRAs. Currently, someone who inherits a retirement account can take payments out over their lifetime while continuing to defer taxes. That loophole may be closed, where the person would have to take all the assets out within five years or some other period of time.

On the business side, the administration is proposing a 15 percent top tax rate on business income, down from 35 percent. And this could have major implications for financial advisors who own their own business, as that 15 percent rate would apply to business income flowing through flow-through entities, such as S Corporations. “That’s a very generous provision.”

Trump is also talking about full expensing of capital expenditures. For example, if you buy a machine, instead of taking deductions over the lifetime of the machine, you deduct the purchase price fully in year one.

How would the government make up for that? It would eliminate the deduction for business interest expense. Currently, for multinational companies that have subsidiaries that earn profits outside of the U.S., those profits are not taxed in the U.S., as long as they remain offshore. If they repatriate those profits back to the U.S., there’s a 35 percent tax. Thus, most keep it overseas.

Trump is proposing that if a company brings those profits back to the U.S. in a certain amount of time (such as six months to a year), those will be taxed at a lower rate. He hasn’t said the rate, but Friedman expects it’ll be something in the range of five to 10 percent.

“That gets the money back here to the U.S. where it helps our economy. And it brings in revenue for the government.”

That would be great for multinational companies, and it’s something advisors should keep an eye on as they’re picking and choosing among sectors to invest.

Another possible change is border adjustments. There’s currently a House proposal stating that if you’re a U.S. company and sell products outside of the country — not through a subsidiary, you would pay no tax on the sale of your product. But there’s a caveat.

“On the flip side, if you import products from overseas, you get no deduction for what you pay,” Friedman said.

This is a very controversial proposal.

What are the chances we’ll see tax reform this year? It is pretty difficult to get done, but Friedman believes we’ll at least see a tax cut for individuals and businesses this year. And it may even be retroactive.

“It would be too embarrassing for the Republicans not to get a tax cut through.”

Friedman also addressed another major piece of regulation affecting advisors: the Department of Labor’s fiduciary rule, which has been delayed until June 9.

“If I’m a betting person, [it's] not a sure thing, but my guess is [that] it keeps getting pushed back,” Friedman said. “We probably will see some changes to the most egregious parts of the rule. For instance, the ability for people to bring class action lawsuits down the road. That’s something I think likely will be viewed as too egregious and be taken away.”