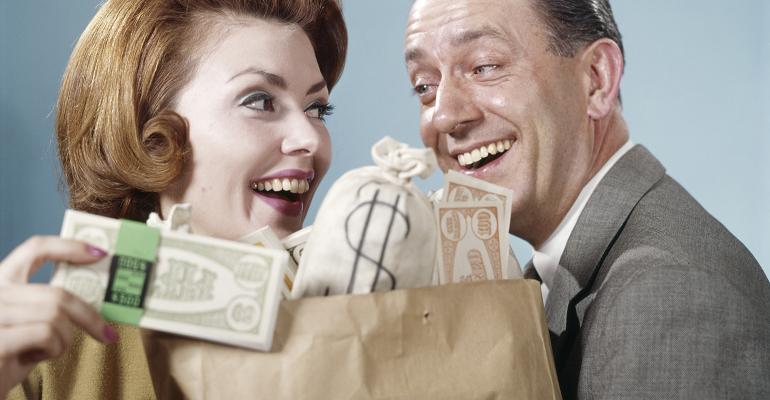 The survey from Herbers & Company found that individuals with assets exceeding $1.2 million and benefiting from the services of an advisor displayed far more satisfaction than those that did not.

Customers working with a financial advisor tended to be happier than those without, with the levels of happiness diverging as clients gained more assets, according to a new survey.

In its 2021 Consumer Financial Behaviors Study, Herbers & Company asked 1,000 people around the country about their levels of happiness. Respondents had to self-report assets equal to or greater than $250,000, with 54% of respondents being male and 79% of total respondents reporting they were married or living with a significant other.

Financial therapist Sonya Lutter, Herbers & Company’s director of institutional research and education, directed the study, with the methodology incorporating an assessment of respondents’ feelings on four "predictors" of happiness—gratefulness, intention, impact and fulfillment.

Lutter noted that happiness could be a difficult concept to measure, but focused on the four pillars as a means to monitor measurable trends of clients’ satisfaction. According to Lutter, researchers were originally intending to find out what sort of things clients were seeking in financial advisors to create an analysis on how advisors can better serve customers. The data on clients’ happiness came as a surprise.

“So we were looking at these levels of happiness, and that’s when we found that people who had a financial advisor were already happier and they were happier with their relationship and communication with their partner,” she said.

Lutter found that all four of these predictive factors were heightened among 66% of respondents working with a financial advisor, compared with only 34% of the respondents who did not work with an advisor. This was true even after controlling for gender, age, income and asset level, according to the analysis.

According to survey respondents, $1.2 million in assets marked a “critical point” at which the use of a financial advisor could significantly impact investors’ happiness. Financial advisor clients with household assets below $1.2 million to $2.6 million reported slightly higher cumulative levels of happiness, but the gap widened significantly after crossing that asset threshold.

By the time household assets reached $6 million or more, the happiness gap between customers with and without advisors was higher than at any other level.

Lutter said this divergence stemmed from anxiety resulting from a form of "decision paralysis," as individuals with more assets have more options available in using those assets, from things like vacations to goods to philanthropy.