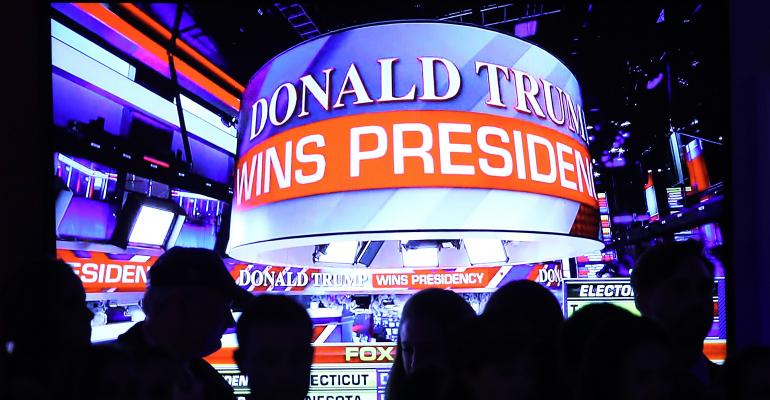 Many Advisors Smile on Trump’s Victory

“Mr. Trump is a successful businessman and one of his goals is to decrease taxes on businesses and higher-income earners.”

Many advisors took a positive view of Donald Trump’s election, citing his promises to cut taxes for small businesses and free businesses from overregulation. They also believe he’ll be good for the economy by fostering long-term growth, lowering taxes and creating jobs—all things that would be positive for investors, they say.

“As a small business owner, I don't see it as a bad thing,” said James Veal, an advisor with JRV Wealth Management Group in Philadelphia. “Mr. Trump is a successful businessman and one of his goals is to decrease taxes on businesses and higher-income earners.”

Jeannette Bajalia, founder of Woman’s Worth and president of Petros Estate & Retirement Planning, which has three offices in Florida, said she’s hopeful about potential changes to small business tax laws and health care laws. She hasn’t been able to afford health insurance for her employees under the Affordable Care Act, and she’s hesitant to grow her business further given the tax burdens.

“Freeing business from overregulation will spark the economy and employment,” said Sean Castle, an advisor with Cherry Creek Investment Advisors in Englewood, Colo. “This is very good news for everyone.”

Castle believes the markets will rally, with pharmaceutical and energy stocks performing especially well. (As of 1:20 p.m. Eastern time, the S&P 500 was up 0.9 percent.)

Phillis Pilvinis, an advisor with PSP and Associates in Surprise, Ariz., said she was cautiously optimistic that a Trump presidency bodes well for the markets long-term, given his opinion on tax cuts and his business acumen for creating jobs.

Trump will have the backing of a Republican Congress, so advisors can expect to see dramatic changes to the tax code, in ways that will be favorable for the affluent. His plan calls for reducing the number of tax brackets to three for personal income tax, at 12, 25 and 33 percent, and he’s advocated for ending many of the common tax breaks while capping deductions. Also likely to go will be the carried interest loophole for Wall Street and the estate tax, which Trump says falls hardest on small business owners and farmers.

Other advisors were just glad to see Hillary Clinton out of the picture and a businessman, one not tainted by elected office, taking on a leadership role.

“I agree with Trump that we needed to drain the swamp in D.C.,” said Randy Long, president of Long Family Office in Wilmington, N.C. “The president and the Clintons have run a criminal administration and it is time to shine the light on these things.”

“Finally lawyers will no longer be running this country,” said Jack Waymire, founder and CEO of Paladin Research & Registry in Lincoln, Calif. “America is giving a businessman, who has actually built and run a successful company, a shot at fixing what is wrong with the U.S.”

Populism has been a big theme during this presidential election, on both the right and the left. Most advisors say the rise of populism doesn’t change the fundamentals of how they do business, and most don’t believe it’s a threat to the markets.

Douglas Stone, a wealth advisor with SeaCrest Wealth Management in Medford, Ore., believes it will lead to a more prosperous nation.

“Populism will allow more investors to invest. They’ll have more money for themselves by way of less taxes, health premiums and better jobs,” he said.

Nicholas Dostal, a Nebraska-based advisor with Securities America, believes the change could move some clients who were opposed to Clinton off of the sidelines to invest.

That said, a few advisors reacted the same way half the nation did: with fear and dismay.

“My initial reaction was nausea, anger and quite honestly I almost cried,” said Cynthia Zalewsky, president of Saratoga Investment Solutions in Saratoga Springs, N.Y. “I thought Americans were beginning to become more open-minded and thoughtful and fighting the good fight against hate and intolerance. We have just taken a huge step back by electing a candidate that represents the complete opposite of all of these things. I am greatly concerned for our country right now and the relationships we have forged with our allies.”

And if Trump were to repeal the Department of Labor’s fiduciary rule, Zalewsky believes that would be a huge step backwards for investors. But a repeal may be good for her business, since she already acts as a fiduciary and believes investors are starting to seek out fiduciary advisors.

Kipley Lytel, managing wealth advisor and portfolio manager with Montecito Capital Management Group in Southern California, said the uncertainty around Trump’s policies is cause for concern. Trump has not been very specific on his lower tax proposals, trade protectionism and spending on economic growth. Trade wars, leading to a drag on the economy, are a real concern, he said.