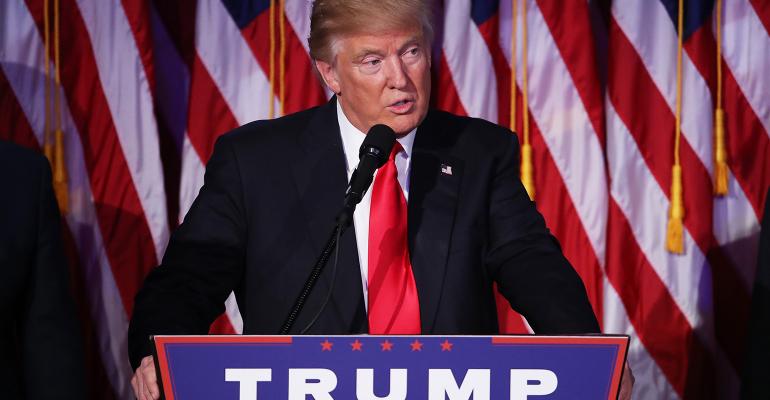 It may be too late for a Trump administration to put the brakes on the impending Department of Labor fiduciary rule, but broader industry regulations going forward are likely to be muted.

There is still much unknown about President-elect Donald Trump’s plans for regulatory oversight of the wealth management industry. But given the tenor of the campaign, it’s understandable that many are either fearful, or hopeful, that his surprise win for the White House, with his party holding a majority in Congress, will herald changes.

For many, what the administration will do to the impending Department of Labor’s fiduciary rule for advisors to retirement accounts is top of mind.

Trump advisor and hedge fund consultant Anthony Scaramucci said months ago that Trump would “repeal” the rule, likening it to “slavery.” Recently, Scaramucci told Yahoo Finance that the word “fiduciary” was a red herring, arguing that the DOL rule was really designed to push investors away from active investment funds and toward passive products. “It’s the government overreaching once again and making a decision for investors on what are good products.”

Others agree the Trump win “at least puts on the table a possibility of a repeal,” said Envestnet’s chief investment officer Tim Clift on a conference call Wednesday morning. “That’s not, by far, a certainty. It’s probably not high on Trump’s list of priorities. Overturning Obamacare and immigration reform probably top the list. But it may change the potential outlook of what the industry has been preparing for [around the DOL rule].”

Skip Schweiss, head of advisor advocacy for TD Ameritrade Institutional, said it might be too late to unwind. “The rule was finalized in April, and was effective in June, with a compliance date in April 2017. I do not see anything changing here. But of course, forecasting the future is risky business,” he said in a statement.

FSI President and CEO Dale Brown issued a congratulatory statement to President-elect Trump, saying the trade group for financial services firms looks forward to helping the new administration ensure “Main Street Americans have access to objective and affordable financial advice as they save for a dignified retirement.” Taking away access to affordable advice had been the main argument for opponents to the fiduciary rule.

But the idea that Trump will turn back the tide of financial services regulation rests on the assumption that he is beholden to Wall Street and the Republican Party, and neither of those things are true, points out Knut Rostad, head of the Institute for the Fiduciary Standard.

“Trump, by a review of his statements and policy positions, is part libertarian, Tea Party conservative and economic and cultural liberal. He is no party loyalist. His instinct, as the world has witnessed, is more to challenge the Republican Party than to go along with it. So, why it should be assumed that Trump will sign off on any or all GOP measures to remove financial regulations?” Rostad said in a statement.

Duane Thompson, analyst at fi360, said it is unlikely a Trump administration will overturn the rule, though new legislation could be drafted to change it yet again. But that is a “time-consuming legislative process,” he said. “There’s also the question of whether the industry would even lobby to overturn the rule since they would have to go back to square one and reconfigure their compliance systems and product lineups this far into the implementation process.”

That’s true for at least one wealth management firm. “I’ve heard that peeling back the rule is on the President-elect’s agenda, but we will continue to adjust our business to be compliant with the rule as it stands today,” said David Knoch, president of 1st Global, a wealth management firm that works with accounting offices.

For proposed future regulatory changes, however, all bets are off. Schweiss expects the reconstitution of the SEC as one major area to watch. He predicts current chair Mary Jo White won’t stay long at the role, and the commission is already down two members. “If anything, it may be a smoother process to get commissioners in place if the GOP controls the White House and Senate,” he said.

The possibility that Trump’s SEC will take action on implementing third party exams for RIAs or imposing a uniform fiduciary standard on the industry is remote, Schweiss says, though the proposed rule on making business succession plans mandatory for advisors will likely go forward.