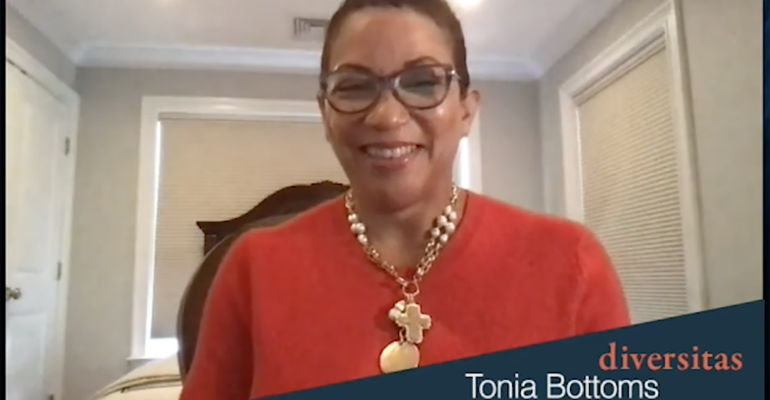 The importance of debunking this pervasive belief throughout the financial services industry.

“There are qualified diverse candidates today—it’s where you’re looking,” said Bottoms. “We as an industry need to start being engaged from that perspective.”

Bottoms was responding to a question concerning diversity at the collegiate level and increasing the pipeline from there, but the comment also responded to Wells Fargo CEO Charles Scharf’s controversial remarks about limited qualified minority talent that were made over the summer. Reuters reported in September that Scharf sent a companywide memo and held a conference call iterating his thoughts on why the bank is struggling to diversify its executive ranks.

“While it might sound like an excuse, the unfortunate reality is that there is a very limited pool of Black talent to recruit from,” said Scharf in the memo Reuters viewed.

Scharf received backlash from the industry at-large and the public. He quickly published a statement apologizing.

The uproar has since subsided, but responses to Sharf’s comments have arisen in diversity and inclusion conversations because it served as an example of a pervasive belief in the financial services industry and beyond.

“I think we as an industry have to start quelling that myth about the qualification piece,” Bottoms said. “We have diverse talent in the industry; we have some real hidden gems that probably aren’t getting exposure [and] would be a shining light for talent that’s in school, that’s looking for a career.”

Siracuse agreed and reiterated that the talent is, indeed, there; and leaders should ask themselves if they are looking in the right places.

Webber, who entered the industry at a time when it was even more male dominated than it is today, believes it’s the financial services industry that needs to be overhauled to accept more diverse talent.

“I suspect that as we make changes in the industry, that should translate back to more diversity at the collegiate level for us then to hire. It’s a partnership. We may have to lead first to inspire others,” she said.

“The answer and the solution is in being proactive to engage and demystify the profession. It’s really incumbent upon all of our collective organizations to be proactive in reaching out and bridging that gap in terms of knowledge, accessibility and the whole socioeconomic aspect of it. Internships, mentorships and scholarship go hand-in-hand to drive in a broader change, a more diverse interest in our profession,” said Antoniades.