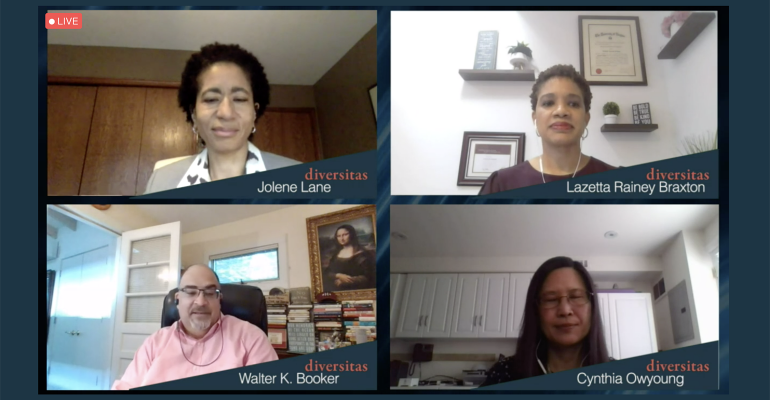 Industry leaders discuss pathways to broadening the diversity of the wealth management industry.

How did wealth management come to be dominated by white males and what is the industry doing to change that? That was the question posed by Jolene Lane, the chief diversity officer and vice president for inclusion and equity at the University of Akron, at the Diversitas: Expanding Diversity in Wealth Management symposium on Tuesday.

The conference brought together wealth management professionals with university and high school students to talk about the lack of cultural and gender inclusion in the industry and how to create wider paths to employment for professionals from diverse backgrounds. Diversitas started in 2019 as a spin-off of Financial Planning Women and Diversity Symposium, launched at the University of Akron in 2017.

Usually held in person to give students an opportunity to network with members of the industry, event organizers chose a socially distanced, digital approach this year.

“We start with the reality that people are tribal by nature. Is it surprising that there’s an archetype in our space? No, that’s true across our society. And I really do think it’s due to successful sufficient familiarity, as I like to think about it,” said panelist Walter K. Booker, chief operating officer of MarketCounsel. “The research all says our circles of relationship are relatively lacking in diversity. Is it surprising that when we are bringing on new colleagues that we stay within our own circles?”

Related: 'We’re Not Big Enough to Do Diversity and Inclusion'

Lazetta Rainey Braxton, the co-CEO of 2050 Wealth Partners, connected the lack of diversity in the wealth management industry to a narrow representation of backgrounds in the larger society. Look at the country’s succession of presidents, she said. All have been white men except for one; that narrow scope trickles down to many coveted positions in society.

Braxton added that there have been laws that have hindered advancement in diversity and inclusion, laws that have helped to perpetuate racism, sexism and homophobia. As written, the legal framework of the country largely applied to, and benefited, white men. Social activism has made some strides: Braxton referenced the U.S. Senate’s approval of the Equal Rights Amendment in 1972, as an example. The rise of the women’s movement that catalyzed in the 1960s pushed the Senate to approve the ERA and criminalize sex-based discrimination. That act is only 48 years old, Braxton pointed out.

Just like there’s explicit bias, Booker pointed out that implicit bias surfaces in hiring decisions, too. Those doing the hiring often have, without conscious bias, more affinity for the people who are similar to them.

“We have a sort of benign and unfortunate exclusion that feels natural and right, and yet comes out quite wrong,” Booker said.

There needs to be a focus on teaching racial literacy, like there is financial literacy, said Braxton. Education around race is often not comprehensive and very Eurocentric, she said.

The overall message being sent out from the wealth management industry to traditional college students is unwelcoming, the panelists agreed. While recruiting at college campuses, Cynthia Owyoung, vice president of inclusion, culture and change at Charles Schwab & Co., has noted how students view financial services.

“Many people from less dominant groups don’t consider financial services as their hot career anymore or a place they can see themselves in ‘So, why would I want to go there,” said Owyoung.

Owyoung suggested firms scrutinize their hiring process for bias. Schwab took a "magnifying glass" to its hiring decisions and concluded it needed to break the recruitment processes into more distinct steps. The company changed the wording on job announcements to ensure it appealed to academic backgrounds beyond finance majors and designed job interviews to be a little freer of implicit bias by creating a series of consistent questions asked of all candidates.

Before examining hiring and recruitment, Braxton challenges firms to do cultural audits. She said students should ask firms about the company culture and mission.

“Firms will focus on the hiring piece, and what they tend to forget is that the inclusion piece is important,” said Owyoung. "Create a place where people of all backgrounds not only want to come but want to stay.”

Braxton advocated for intentional immersion, the act of deliberately engaging with individuals and groups from different backgrounds, saying it was one of the best ways to gain cultural competency.

Owyoung, bringing hiring back to focus, referenced studies where people who have intentionally "binge watched" a series of positive images of people with different backgrounds had a more positive degree of inclusion among candidates when it came to race, ethnicity, sexual orientation or gender. Hiring decisions were based more on the hard and soft skills a candidate had.