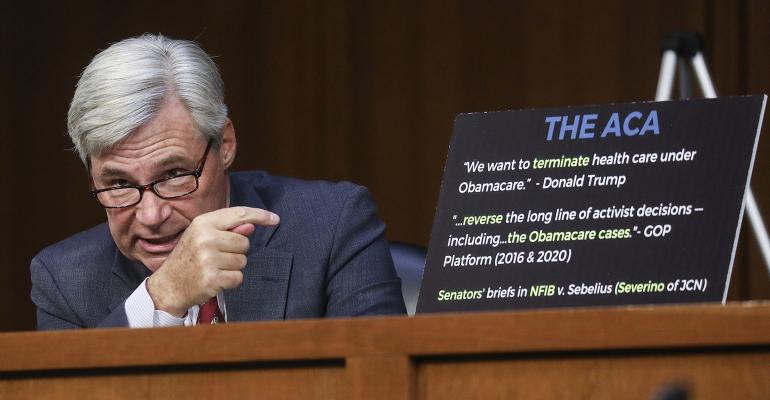 Pool/Getty Images
U.S. Sen. Sheldon Whitehouse (D-RI) points to a chart as he speaks about efforts by conservative interest groups who oppose the Affordable Care Act on the second day of the Supreme Court confirmation hearings for Judge Amy Coney Barrett.
News>Industry

Jumping from the employee channel to build an independent advisory practice is increasingly easy—except when it comes to health insurance.

The Trump administration’s nomination of Judge Amy Coney Barrett for the Supreme Court reignited a long-standing debate on the constitutionality of the Affordable Care Act.

As politicians argue over Obamacare, many independent financial advisors, functioning as small-business owners often responsible for purchasing their own health insurance, again face some uncertainty over the viability of the options available to them.

Related: What Happens to Your Clients if the Affordable Care Act Goes Down?

In fact, the security of employer-paid insurance is one reason some advisors choose to stay with a bank or brokerage firm even if they may otherwise want to jump to an independent practice.

Options outside employer-provided plans are spotty. Some independent advisors use Obamacare while others seek out insurance through an association or professional employment organization. Some take their chances at going directly to a provider.

It is getting marginally cheaper, depending on where an advisor lives. This year, the average health insurance premiums fell 4% and the number of insurance providers in the federal health care marketplace increased by 20 companies, according to the Centers for Medicare and Medicaid Services. This follows the 1.5% decrease in 2019.

Sixteen U.S. states have more than five insurers in their marketplace. Only three states, California, New York and Wisconsin, have more than 10, according to the Kaiser Family Foundation.

But in other parts of the country, there are increasingly fewer options and rising premiums.

Adam Cmejla, a fee-only financial advisor based in Carmel, Ind., who caters to optometrists, subscribed to Ambetter after his wife left her full-time job, with health benefits, to care for their two young children. Ambetter was one of only two providers left in the state after two other providers were scared off in 2017 by the volatility in the federal health care marketplace. Some insurers, unsure how Obamacare would fare under the Trump administration, dropped out of the marketplace.

Things were fine until Ambetter notified the family in 2019 that it planned to raise their premiums and deductibles. The family had chosen a high deductible before to lower their monthly payments and earmarked part of their emergency savings for medical expenses through an HSA.

“When I look at that—being a numbers guy … my family was going to have to incur [nearly] $30,000 of [out-of-pocket] expenses before insurance would cover all of us,” said Cmejla.

With no preexisting health conditions, the family saw no point in paying a higher premium and deductible.

What Cmejla could access within the health care market depended on his business model for his firm, Integrated Planning & Wealth Management. Cmejla didn’t qualify for the small-business health options program because that requires a business owner to have at least one eligible full-time employee. He has an employee, but they are covered through a family member, which eliminated the small-business option.

He also didn’t qualify for the insurance through his association with the Financial Planning Association, which offers group health insurance to firms with a minimum of two employees.

Cmejla and his family joined Christian Care Ministry’s Medi-Share and picked a high-deductible plan (or what they call the “annual household portion” of the health care cost, since CCM is a not-for-profit and not considered an insurer) of $5,500, and a $433 monthly premium, which comes to $5,196 for the year.

Other advisory groups have put together insurance options for the industry. Chalice Financial Network supplies health insurance to members through a professional employer organization. The Financial Services Institute secured group health insurance in January after years of fighting the courts to allow trade associations to be able to seek health insurance for its members.

When an advisor’s income surpasses the ACA’s income cap, and alternatives don’t meet their needs, they often have no choice but to go directly to a provider.

Advisor Vance Barse of Your Dedicated Fiduciary in San Diego operates under Commonwealth Financial Network’s corporate registered investment advisor. Since Commonwealth does not offer its 1099 contracted employees health insurance, Barse chose to purchase insurance for his family directly from Blue Shield after being ineligible for subsidies in the state exchange. (California runs its own marketplace apart from Obamacare.)

He paid $1,700 a month for his silver preferred provider option (PPO). It was higher than a health maintenance organization (HMO) plan that commonly gives subscribers lower monthly payments. But a PPO gave Barse’s family the flexibility they needed to seek specialists without a referral from a primary care provider, unlike an HMO. Since his wife, Jodi, has a preexisting health condition, Graves’ disease, they require seeing specialists. What’s more, all of her doctors are not on an HMO plan, said Barse.

Barse also had to consider a health care option that met the needs of a growing family. An extra $50 to $100 per month seemed worth the peace of mind in knowing their two children would be cared for, he said.

Things took a change when Barse expanded his firm into Dallas and added an additional employee. He now could qualify for group health insurance, which has lower pricing. He made the Texas city his primary residence and jumped at the opportunity to reapply as an employer.

He’s had the employer-sponsored plan with Blue Cross and Blue Shield since Oct. 1 and plans to allow it to roll into next year.

Health insurance comes up all the time when an advisor is thinking of leaving the employee channel to launch an independent firm, said Michael Terrana, CEO and president of recruiting and consulting firm Terrana Group in Chicago.

According to Terrana, some large independent firms that have a W-2 and 1099 platform will extend their health care options they’ve secured for their employees to their independent advisors.

But the firm will not cover any portion of the independent’s insurance plan because doing so means it is providing benefits, inviting scrutiny from the IRS.

LPL Financial, one of the largest independent broker/dealers, announced last week that it was able to obtain health insurance options for its advisors through its business partnership with Paychex, a payroll and human resources provider. Solo advisors are able to tap into the new resource.

"With our size and scale, we are able to deliver a solution that meets critical [needs such as cost-effective health care solutions]," said Andy Kalbaugh, managing director and divisional president of national sales and consulting at LPL, in a statement.

Terrana said he understands the concerns independent advisors have because he went through the same situation when he started his company.

“I only had myself as an employee, so I had to make my wife an employee to make it two [in order to qualify for group health insurance],” he said.