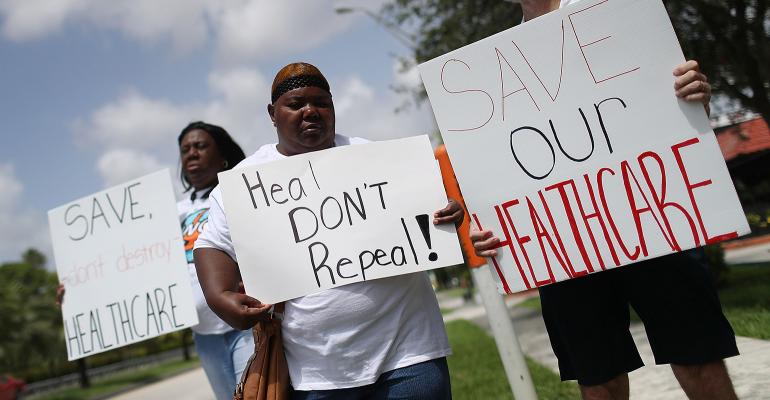 What Happens to Your Clients if the Affordable Care Act Goes Down?

It’s difficult to overstate the impact of the ACA on the American health care system.

Millions of Americans found themselves out of work and without health insurance during the Great Recession of 2008, and the problem was especially acute for older people who had not yet reached the safe harbor age of 65, when Medicare eligibility begins. The best advice I was able to offer back then in articles and columns on the topic? “Good luck.”

That was before the Affordable Care Act became law in 2010. Quality health insurance was impossible to find, and people with preexisting conditions couldn’t buy insurance at all.

The ACA reaches into nearly every nook and cranny of the health care system. And it has been especially beneficial for older, pre-Medicare Americans, especially the guarantee of coverage for people with preexisting conditions, premium subsidies and access to Medicaid in many states. Coverage rates for this age group have improved dramatically since those days.

Republicans have been trying to topple the ACA since it became law. The latest salvo is a lawsuit, brought by 20 Republican-leaning states and supported by the Trump administration, that is now before the U.S. Supreme Court. The case centers around the constitutionality of the ACA’s individual mandate.

The court is scheduled to hear oral arguments on this case right after the November elections; a decision isn’t likely until sometime next year. If the court rules for the plaintiffs, the ACA will be gone.

The death of Justice Ruth Bader Ginsburg this month has increased attention on the case, with some observers predicting that a further shift of the court to the right boosts the odds that the ACA could be overturned.

It’s not clear at all that this will happen; numerous expert commentators on the legal aspects of the case note that precedent is on the side of the law’s defenders, and even the conservative pundits think the challenge faces long odds.

But for planners, the possibility that the ACA could go down should be considered as you assess risk for clients in this age group. Evidence already is surfacing that the pandemic is producing a wave of early retirements. A study published in September by Avalere Health found that 12 million workers are likely to lose employer-based insurance during the pandemic, with a percentage loss of coverage among people of color that is double that for white people.

Impact of the ACA

It’s difficult to overstate the impact of the ACA on the American health care system. Mass media coverage tends to focus just on the insurance exchanges and Medicaid expansion, but the law reworked many parts of the system. Here are just a few examples, courtesy of a thorough brief on the topic by the Kaiser Family Foundation. The law:

Aside from the courts, the ACA’s future depends very much on which political party calls the shots in Washington over the next few years. Democrats generally favor strengthening or expanding the ACA. For example, Joe Biden favors adding a public option to the insurance exchanges and expansion of Medicaid coverage.

The party’s progressive wing favors Medicare for All; while that seems like a long shot right now, the current unstable political and economic climate means it cannot be ruled out. Even some employer organizations, facing ever-rising insurance costs themselves, are starting to come around to the idea that a more aggressive governmental intervention in the health care system is necessary.

Republicans can be counted on to continue to chip away at the ACA’s protections if they remain in charge. And, despite their regular assaults on the law, they have yet to propose anything comprehensive as a replacement. Rather, they have offered up scattershot plans focused on one aspect of the problem or the other, such as prescription drug prices.

And this is key: The general Republican strategy is to focus on lower premiums for healthier people in exchange for reduced levels of insurance protections, such as pre-existing conditions. That runs counter to the entire purpose of insurance, which is to protect those at risk.

That approach would bring us right back to where we were before the ACA. Why? Because older people have more preexisting conditions and utilize more health care. And that will only worsen due to the coronavirus, since infection is, without doubt, a preexisting condition.

Health care already was a major category of retiree spending before the pandemic; in 2016, the average person covered by Medicare spent $5,460 out of pocket, according to the Kaiser Family Foundation. But that’s just the 65-and-older population. Younger retirees could find themselves grappling with higher out-of-pocket expenses, depending on the fate of the ACA.

Some of this is quite manageable, since a good deal of expense is predictable.

A big chunk of spending will go to Medicare premiums—Part B outpatient services, Part D prescription drugs and Medigap for those who choose original Medicare rather than Medicare Advantage. A model for planning health care costs in retirement published in 2018 by Vanguard and Mercer found that a 65-year-old woman using original Medicare and a Medigap policy (Plan F) could expect to spend $5,200 in 2018 for health care.

Before the ACA became law, adults ages 50 to 70 who had to rely on the individual insurance market for coverage paid much higher premiums than people who had employer coverage or Medicare, according to the Commonwealth Fund. And the coverage they could find provided “poor access to care and entailed high out-of-pocket expenses, making it a particularly unaffordable option for people who are older, have low incomes, or who have chronic health problems.”

For planners, that scenario points to the need for higher savings to buffer clients against the risk of high out-of-pocket expenses. That might be done in liquid savings vehicles or tax-advantaged accounts, including health savings accounts where available. An ACA-goes-down scenario also is a good argument for a delayed Social Security filing. This can boost monthly income by 8% for each 12 months of delay after your client’s full retirement age, and benefits are adjusted annually for inflation.

Should the ACA survive, you also can add value for clients by helping them to navigate ACA coverage as well as the transition to Medicare, which presents unfortunately complicated consumer choices.