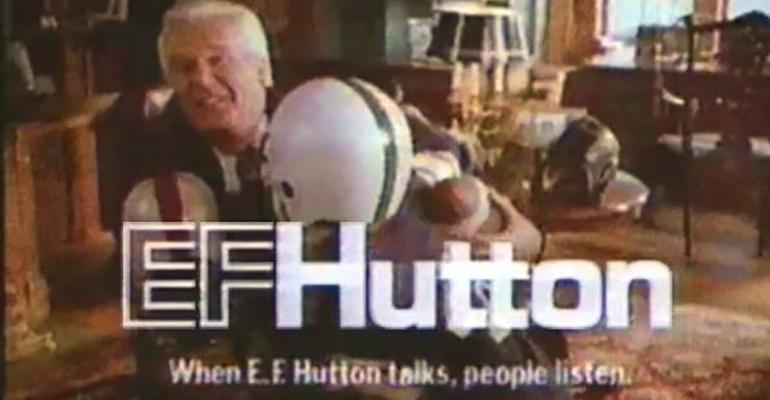 EF Hutton keeps coming back from the dead. Kingswood Capital Markets is the latest to take on the name of the storied brokerage firm.

Global investment bank Kingswood Capital Markets, a division of Benchmark Investments and wealth management firm Kingswood Group U.S., is bringing EF Hutton, the famed brokerage firm started in 1904, and last seen in 2018, back from the grave.

The investment bank announced in a news release it had secured the rights to the EF Hutton brand to attach itself to a “household name in finance.”

It is not the first time someone has tried.

E.F. Hutton & Co. was founded in 1904, and eventually became synonymous with Wall Street in the minds of consumers thanks largely to an advertising campaign based on the tag line "When E.F. Hutton talks, people listen." Following the stock market crash of 1987, when the firm was reportedly on the brink of insolvency, it was acquired by Shearson Lehman Bros. After a series of acquisitions and mergers, the brand was eventually absorbed into Citigroup and the name fell out of use in 1993.

After the subprime mortgage crisis in 2007, Citigroup sold the name to a group of investors, and it eventually wound up being owned by a group of ex-E.F. Hutton executives.

In 2012, Frank Campanale, a Wells Fargo branch manager and former CEO of Smith Barney Consulting Group, an E.F. Hutton successor, led a three-year effort to bring the name back as branding for a boutique investment advisory firm. The company went public in 2013 under the HUTN ticker. But plans were thrown into question when Campanale jumped ship to lead Lebenthal & Co.’s wealth management division. Efforts to launch a Canadian brokerage were also tabled, according to published reports.

In 2015, Stanley Hutton Rumbough, the grandson of Edward Francis “E.F.” Hutton, and a group of executives used the name to brand a web-based lead-generation service called Gateway to connect consumers with independent advisors, as well as accountants, estate lawyers and insurance agents.

“The independent financial provider is facing a number of challenges that E.F. Hutton’s able to help with,” said then-CEO Christopher Daniels at the time. “Those challenges involve, to a large extent, marketing themselves and expanding their business.”

That company hinted at the creation of a possible robo advisor in 2016 with the announcement of a new website that promised “automated financial services for clients 24/7 and with customized services.”

It also ventured into social media with the creation of the Meggalife platform, which attempted to incentivize its users to establish 401(k)s and save for retirement by employing a revenue-sharing approach (in addition to the allure of accumulating points through their daily online activities).

In 2018, the company, restyled as EF Hutton, then announced plans to enter the cryptocurrency business with “multiple instruments, coins and tokens.” It had moved operations to Springfield, Ohio, in 2016 (meant to appeal to Main Street investors), after which its executives resigned and the company ceased operations.

Now, it is Kingswood Capital Markets' turn to make something of the name.

“EF Hutton is known for its decades of experience as a U.S. financial services institution,” Joseph Rallo, CEO of EF Hutton, said in a statement. “We strongly believe that by rebranding as EF Hutton, our overall market recognition and success will align with the incredible legacy of this powerhouse firm that was once synonymous with Wall Street and represented the future of investment banking globally.”

“Leveraging the name recognition of EF Hutton around the world will help our investment banking arm continue the successful rollout of its services in the U.S. market and beyond,” said Mark Nessim, CEO and managing partner of Kingswood U.S.

The investment bank has raised $3 billion for its clients within the last 12 months, according to the release. Rallo told Bloomberg News that it's competing to be the next Cowen or Jeffries Financial Group.

In January, Rallo hired Gaurav Verma as director and head of technology, media and telecom. Verma brings several years of experience as business development exec at Bank of America Merrill Lynch and Citigroup.