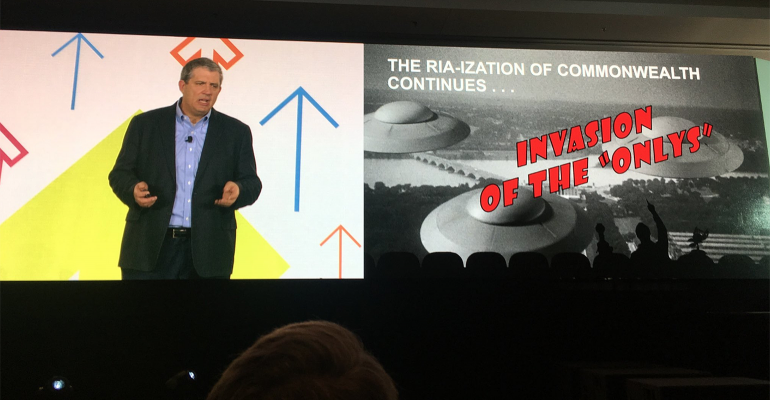 Advisors at independent broker/dealer Commonwealth Financial Network are further along in transitioning their books of business to a fee-based advisory platform than most other IBDs, with many deciding to give up their FINRA registrations altogether, according to advisors and executives gathered in Austin, Texas recently for the firm’s annual conference.

Of the 1,800 advisors Commonwealth serves as a b/d, 75 advisors, representing $7 billion in assets under management, have dropped their FINRA licenses and made the transition to fee-only; another five to seven are set to make the switch in the first quarter of next year, executives said.

“That may not sound like a lot,” Commonwealth CEO Wayne Bloom during his opening keynote. “But we are on the cusp of a wave of IBD brokers dropping their FINRA registrations.”

The evolution is further along at Commonwealth than at most other IBDs, said Trap Kloman, a longtime LPL executive who joined Commonwealth in 2015 and was speaking at his first national conference since being promoted to president of the firm. Already, “78 percent of your production comes from advisory fees,” Kloman told advisors during his keynote speech. “That’s two times the national average.” Commonwealth’s advisory assets are up 32 percent over last year, he said.

Starting in 2013, Commonwealth began helping advisors build out fee-only practices with a full-service consulting program, giving them something more than just a call center. “We’re excited to start scaling that,” Kloman said. “There is a market opportunity out there. We were born out of an IBD and don’t want to walk away from that. But we recognize we can’t treat these advisors that are migrating to fee-only as just a modest extension of the service platform.”

“The trend is real,” said Greg Gohr, senior vice president of wealth management at Commonwealth, who led a session on the benefits of dropping a FINRA registration. Most advisors become investment advisor representatives operating under Commonwealth’s corporate registered investment advisory, he said, while around eight firms have opted to start their own RIAs.

“If you solely identify yourself as an investment manager, you become accountable for only two things: price and performance,” he said, neither of which is a good point of differentiation.

Gohr said the fee-only offices are structured a bit differently as well, operating more as teams of salaried advisors than siloed practitioners.

While he said he did not discount the “biased narrative” in the media against brokerage-based business, almost all new clients among Commonwealth advisors are being onboarded on the fee-only planning platform—Preferred Portfolio Solutions—regardless of the licensing of the firm, Gohr said. The Department of Labor’s fiduciary rule, while not passing, shows an “unstoppable march in that direction” across the industry, he added. A fee-only business is also better for succession planning, as most younger advisors prefer an advisory role to that of salesperson.

Price compression in asset management is also prompting the change. “We have yet to see a material erosion of asset-backed fees” at Commonwealth, Gohr said, which is a credit to the advisors. Advisors who make the switch will lose the trailing-12 month revenue from funds that have been sold, he said, and that can be a financial hit. But transferring that income to the fee-based platform, “most advisors who do this move get back to revenue neutral,” he said.

Still, he said, “we don’t think commissions are going away or the broker/dealer is going away. Sometimes commission business is better for the client.”

Michael Comstock, an advisor with Premier Wealth Management near Nashville, said he made the decision to give up his FINRA registration and go fee-only because it was a “more streamlined” practice with “less moving parts,” and helped move  client discussions away from investment planning and toward holistic wealth management.

Comstock said it was an easy conversation with clients, most of whom thought he was already charging based on fees. For the commission-based products that had to move over to the fee-based platform, it was relatively painless to set up household accounts for those assets. For some holders of variable annuities and other accounts and clients that didn’t fit, “it was a chance for us to do some pruning,” he said.

Ted Kerr, a Commonwealth advisor with Touchstone Capital, is one of the four or five advisory teams at Commonwealth who chose to start their own RIA as opposed to working under Commonwealth’s. He said he did it because he wanted the flexibility to offer proprietary investment to his clients, something the Commonwealth RIA would not let him do.

It can make financial sense for the advisor as well, as they usually earn more on the fee-based side. Kerr said moving some “accommodative” accounts like IRAs to the fee-based platform meant he “tripled the amount of income I was getting on those accounts.”

Though launching the RIA was a headache, he had to shut down his office for a couple of months, and at the end had a total of about 20,000 pages of printed forms to be signed.  “We repapered our entire business,” he said. If given the chance to do it again, he’d recommend advisors implement the move over time, instead of “ripping off the Band-Aid.”

Both agreed that being able to say they were fee-only advisors helped put them on an equal footing with other service professionals in their communities, which was important when networking for business. “I perceived a change in the way my clients see me,” said Kerr. “I think it makes me a better advisor. It puts you in a different category.”

Another trend supporting the move away from investment management is the growth of model portfolios on Commonwealth’s Preferred Portfolio Solutions Select platform.

There are now some 70-plus investment models available to advisors, accounting for around 10 percent of the almost $100 billion on Commonwealth’s fee-based platform, according to Peter Essele, manager of the Investment Management and Research team at the IBD. Most of those models were designed based on requests from advisors based on their needs.

“We are not the world’s best investment manager,” said Katherine Liola, one of Commonwealth’s fee-only planners who began using PPS Select in 2012 at her firm Concentric Private Wealth, mostly as a tool for clients with smaller accounts. “We know the portfolio is getting rebalanced. We use the tool to help us with growth and capacity,” she said. “We look at investment management as being highly commoditized.” Rather, she said she wanted to spend her time on building the business, not managing money.

“It took me 11½ years to figure out I’m not a good stock picker,” said Tim Weller, a financial advisor with Weller Group that started using Commonwealth’s investment model platform in 2015, shortly after getting crushed in a market rout in October 2014. Weller said he has about 30 meetings a week with clients, and that leaves no time to make trades. “I picked up so much time to have quality conversations with clients,” he said.

Both Liola and Keller said the fear that clients would question their value if they knew they had given up managing their assets was overblown. Weller said the first 200 accounts he moved over “met with zero resistance.” Viola said she positioned the move as having Commonwealth as a partner for investment management, operating in the background. “Those clients embraced having a team,” she said.

On the technology front, Commonwealth has invested some $500 million into its platform to date, said Kloman, much of that to support advisors moving into fee-based assets.

The IBD announced at the conference it was integrating financial planning software RightCapital into its advisor workstation Client360, making that the sixth financial planning software available to its advisors, alongside popular options like MoneyGuidePro and Naviplan. RightCapital has additional tax planning capabilities and incorporates student loan debt into the planning calculations.

Client360 is also getting a new, sleeker interface as well, eliminating some legacy coding and tightening up the integration of the advisor tools, all of which operate under the hood of Commonwealth’s user interface, said Darren Tedesco, Commonwealth’s head of technology and innovation.

Tedesco said Commonwealth recently dropped Yodlee as its aggregation partner to bring in held-away accounts in favor of Quovo, which he said was more reliable, and the firm will soon test a text messaging platform that will allow advisors to message clients inside Commonwealth’s platform using their own phone numbers and contact details.

All the pieces are being put into place to give the platform flexibility to add more planning tools in the future, Tedesco said.

Andrew Daniels, managing principal for recruiting at Commonwealth, said the firm had a “phenomenal” recruiting year, but they deliberately recruit at a rate that won’t dilute the service they could provide to their advisors. He said the firm had its highest average advisor production ever this past year, meaning the top line ($1.4 billion this year) has grown at a rate faster than the number of advisors they’ve added.

John Rooney, another managing principal at the firm, said there were no plans to grow faster by acquisition, or to monetize the partners’ principal through an initial public offering or an outside investment.

“We’re not casting a wider net,” he said. “I can tell you we are not going to sell. If we were thinking we were going to monetize Commonwealth, we would have been running it a lot differently. We built this place to live in it.”