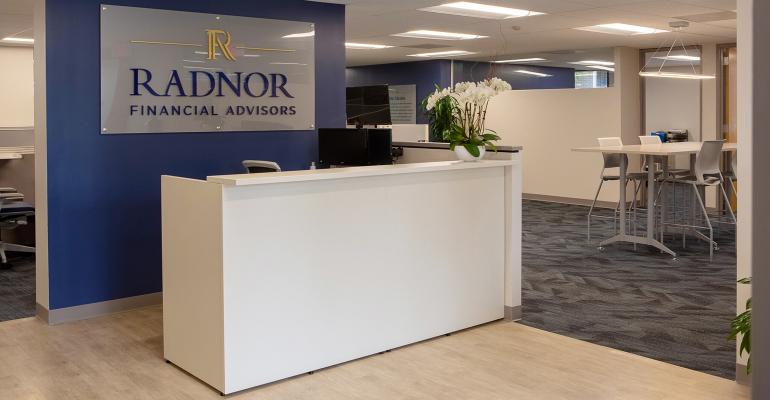 Additional financial terms of the agreement were not disclosed.

“Radnor has delivered a suite of services that encapsulate wealth and investment management,” he said.

Radnor was once a spinoff of Hay Group, a human resources consultancy that worked with corporations. The firm started in 1986 in Philadelphia as Radnor Capital Corp., serving corporate executives. By 1989, the firm had changed its name to Radnor Financial Advisors and homed in on creating tools to assist execs with restricted stocks and stock options.

According to Michael Mattise, Radnor's managing partner, president and chief investment officer, in the early days there weren’t many RIAs in the industry, so the first 10 years of growth were a different landscape compared with today where RIAs have begun to surpass the number of brokerages. To compete, the Radnor team focused on the quality of its services.

“By doing our best to serve our clients and giving them concierge-like services, those clients then naturally refer people to us,” he said. “We had a little bit of an edge in that part of our focus was providing corporate financial planning to corporate executives. That certainly helped in the referral process.”

Radnor turned to CI Financial to scale, Mattise said. In 2016, the firm transferred ownership from one of the founders and former CEO Edd Hyde to the next generation, but needed help attracting and retaining talent.

CI Financial can assist with that, Mattise said. “They’re basically assembling a group of very high-quality firms and getting access to those firms is very attractive to us,” he said.

Among the firms CI Financial has added to its fold recently are Chicago-based Segall Bryant & Hamill, its largest acquisition to date at $23 billion in AUM, in January; Dowling & Yahnke, a $5.6 billion AUM firm in San Diego in May; and Atlanta-based Brightworth, with $4.7 billion in AUM, in March. CI also made a subacquisition of $2.4 billion AUM Pinnacle Advisory Group though its affiliate Congress Wealth Management.

Last month, Mercer Advisors’ Vice Chairman Dave Barton criticized CI Financial for acquiring a lot of firms while its stock price dropped over the years from $32 to about $18 per share today. He then admonished selling advisors to “be careful what you’re locking into with regards to your potential partner."

CI Financial declined to comment, but Mattise said the Radnor team is more interested in the firms CI Financial is rounding up and he believes “combining and sharing our firms amongst each other will only make each of us stronger.”