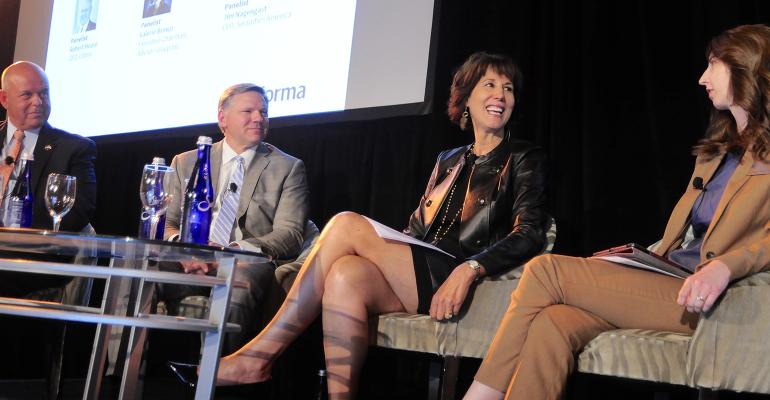 The Biggest Threats to IBDs

Three top executives of leading IBD firms on fixing the fiduciary rule, how the demographic tides are working against them and why they should be more scared of Amazon and Google than each other.

As the Labor Department’s efforts to impose a fiduciary rule on qualified retirement accounts is delayed, it’s imperative that independent broker/dealers step up to the plate and take the lead on finding a workable rule that puts clients’ interests ahead of brokers and asset managers.

That was one of the takeaways from a conversation with three top executives of leading IBD firms who spoke recently at the Wealthmanagement.com Executive Forum in New York: Robert Moore, CEO of Cetera Financial Group, Valerie Brown, the chair of Advisor Group and Jim Nagengast, CEO of Securities America.

Related: Can the Independent Broker/Dealer Survive?

"We will get an opportunity to go in and fix it,” Moore said. “But we’ve got to put our foot forward,” with clear, workable and client-focused solutions, especially as the Securities and Exchange Commission considers its efforts to bring a fiduciary rule to the industry.

The DOL ruling was “500 pages long,” Moore said. “By definition, that’s not effective.” He said that he and others in the IBD community attempted to engage with the DOL staff early in the planning stages, and he personally visited the DOL offices several times, but the input of industry players wasn’t welcomed. “The dialogue disintegrated pretty quickly,” he said. “That moment was missed.”

Related: Highlights from the Executive Forum: Advisor Tech in the Year 2020 Roundtable

“Don’t underestimate [the regulators’] power of research and staff. They are formidable,” he said. The industry itself needs to come up with well-reasoned solutions and convince regulators of their merits, or risk having a rule imposed on the industry with “unintended effects that would be ugly.”

All panelists were more hopeful for the SEC to take a more reasoned approach to a fiduciary rule.

“We all embrace fiduciary as a concept,” said Brown, adding a sensible rule should be applied across the entire business, not just qualified accounts. “But [product manufacturers] need to be arm-in-arm with us on this,” when coming up with viable solutions. Brown said she was disappointed in the asset managers for introducing the so-called “clean shares” as a fiduciary solution—doing away with sales loads and distribution fees. Brown suggested it was an overly broad “fix” that doesn’t fit the business and it would impose too high of a cost on the part of both b/d and client. “We’ve got to innovate better than that,” she said.

Portability of assets needs to be considered, Nagengast said. A client’s needs may be different across different accounts, and viewing “best interest” through the single lens of fees is ignoring other factors. “Lowest cost is not always in the best interest for everyone,” he said.

Beyond regulations, the biggest challenge facing the executive leaders is the same affecting other advisory channels in the industry: Demography.

The panelists said they were all still looking for answers to counter the industry’s seeming inability to broaden its demographic makeup in any meaningful way. Moore noted that the level of female financial advisors, at 17 percent of the industry, remains a stubborn bar despite all the efforts to change. “We’d need to bring in 35,000 female advisors to get that 17 percent to 25 percent,” said Moore. And the generation gap is perhaps more worrying. “The tide is so wrong,” he said, adding the industry would have to add 100,000 advisors over the next few years to replace retiring advisors, and the pipeline of new recruits “is no where near that.”

Brown suggested that the notion of luring millennials into an industry that still uses the word “sales” to describe its mission is a non-starter. “Sales is not the word,” she said. Industry initiatives like having the Advisor Group’s W Forum, an annual networking event for woman advisors, partnered with the personal financial planning degree program at Texas Tech University, to bring mentorship and job opportunities to female students, was a step in the right direction.

“The (wirehouse) training classes of old are gone,” said Nagengast, and given that many wirehouse reps eventually move to IBDs, the pipeline of trained talent is smaller. That’s moved some of Securities America’s efforts to colleges and university training programs, as well as professional certification courses, but the biggest challenge was educating younger professionals on what the job was all about. “We’ve had some success, but we need to sell it as a calling and a profession,” he said.

When asked what kind of services they needed from outside vendors who may want to work with their platforms, all three agreed the solutions they needed were technological ones, particularly those that make not just the client experience, but the workflow of advisors, as easy and intuitive as any retail-facing digital platform. Being disrupted by digitally native firms is a greater competitive threat than what is found within the industry, Brown said. “I would far rather compete with these two people sitting here than I would Google or Amazon.”