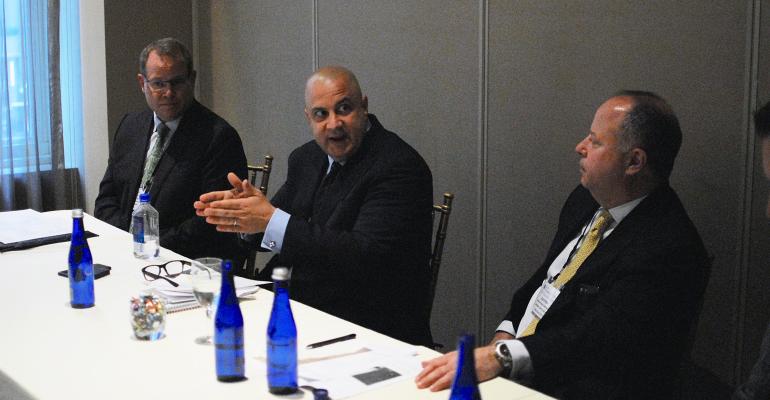 Can the Independent Broker/Dealer Survive?

“Firms that actually create value, that actually add services, that actually help the advisor achieve their goals and deliver a better experience to the end client—those are the ones that will continue to be part of the supply chain. The rest will be marginalized.”

The value of independent broker/dealers is impacted by consumer and advisor preferences, regulatory changes, market conditions and what the end consumer is willing to pay. So, what does the future hold for these firms and will they be relevant in five years? That’s the question Matt Lynch, CEO of Strategy & Resources, sought to answer during a panel session at WealthManagement.com’s 2017 Executive Forum this week in New York.

“The term broker/dealer is a regulatory term and doesn’t really describe a business model,” Lynch said. “The firms that exist to mark up somebody else’s work, or mark up a trade, or mark up on a transaction or just take a platform and add an additional fee to it, those firms will not be here in the near future.”

“Firms that actually create value, that actually add services, that actually help the advisor achieve their goals and deliver a better experience to the end client—those are the ones that will continue to be part of the supply chain,” he added. “The rest will be marginalized.”

Lynch believes there are too many intermediaries in the supply chain between the advisor and the services they deliver to the end client.

“There’s not sufficient margin today and won’t be in the future for all the intermediaries that are out there—from the technology firms to the product providers to the broker/dealers and everybody else in between,” he said.

The closer you are to the advisor, the more likely you are to survive and prosper in the new environment.

Jon Stern, managing director at Berkshire Capital, said that when the IBD business first started, there wasn’t the need for the large cost structure or infrastructure that’s involved today.

“The advisors were younger, so you didn’t need as many resources for practice development,” he said. “Insurance companies bought these businesses because they thought they could sell VA and other product through them, and those businesses didn’t really need to make money. They were just sort of marketing arms for the product manufacturing.”

But the business has gone through a lot of cycles, and mergers and acquisitions activity have followed those cycles. Many insurance companies, for example, have exited the b/d business.

“The payout model that existed when this business started and evolved has now trapped most of the businesses—particularly the ones that are not very large—into very low profit margins, stagnant, if any, growth, and puts a lot of pressure on pricing,” Stern said.

“I think the small- to mid-sized firms that are traditionally independent broker/dealers are in deep trouble—very limited from a shareholder value perspective,” he said. “If I were them—and this sounds self-serving—I would sell all.”

“The firms that still have a decent amount of commission business—12b-1 business, aging advisors—they’re in real trouble from a shareholder value perspective, and if they don’t do anything to right the ship, it’s just going to keep getting worse and worse every year.”

Firms are spending between 30 and 50 percent of their technology budgets on “lights on,” meaning “maintaining a Cold War tech stack that they’ve inherited or through acquisitions that have been folded into that organization,” said Jeff Schwantz, head of client solutions at Morningstar. Are they spending the dollars on the right things, he asked.

There’s not a lot of innovation there, and Schwantz believes b/ds need to use an application-programming interface approach to their technology.

Tom Moysak, CEO of Xtiva Financial Systems, says there is an industry consensus that the business is now about monetizing advice, not investment management. The b/ds of the future have to figure out how to enable advisors to do that. The firms that can figure that out can command premium valuations, because the profitable advisors are monetizing advice.

Firms that are more attuned to what their advisors are saying—those that know what advisors want out of the relationship and what tools and vendor partners are going to be relevant—are the ones winning marketshare, Lynch said.

“Firms that have five, six, seven, eight years of sustainable growth are doing more right than not,” he said.

What about the small firms? Will they survive in the new environment?

Those that are narrowly focused—serving a single type of advisor—tend to survive, Lynch said. In addition, those that participate in the manufacturing margin tend to outperform from a profitability standpoint.

“So by definition they’ve cut out a TAMP or cut out an outside provider,” he said. “The ones that are actually finding new sources of revenue or capturing some of the revenue that was somewhere else in the supply chain and now keeping it in the family, those are the ones that we see that tend to be sustainable.”