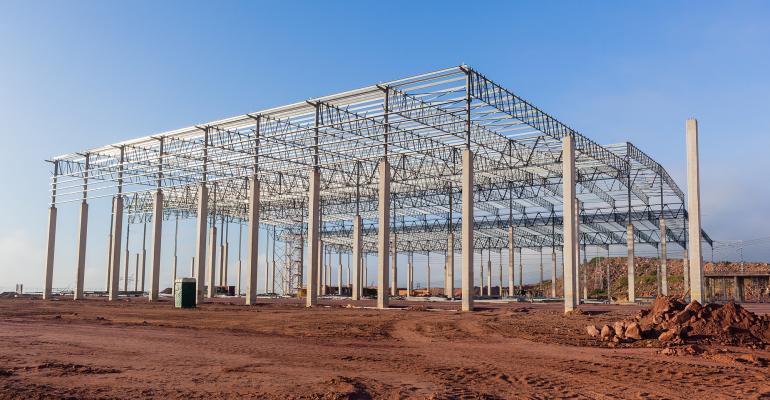 In spite of still stellar property fundamentals, both industrial developers and lenders prefer to play it safe on new construction.

Even with solid property fundamentals, the increased cost of debt and equity, along with ongoing discovery for land and asset prices, has made both industrial developers and lenders more cautious, notes Val Achtemeier, vice chairman of capital markets with real estate services firm CBRE. Less well-capitalized developers, such as those specializing smaller, speculative projects, or those with focusing on tertiary sites face the biggest hurdles. But most developers are exercising some restraint right now, Achtemeier notes.

Multiple interest rate hikes this year have added to developers’ already heavy cost burden, says Alan Pontius, senior vice president and national director, industrial and office, with real estate services firm Marcus & Millichap. Developers must also consider the impact of a project’s exit cap rate and dropping underwritten yields, he notes. “No project is immune to rate hikes unless a developer builds all cash, and even then, the next buyer may factor in an increased cost of debt.”

In November, investment sales involving industrial properties were closed at an average cap rate of 5.4 percent, according to data firm MSCI Real Assets, above only the cap rate for sales of multifamily properties.

Related: What Impact Are Construction Delays Having on the Industrial Sector?

At the same time, while industrial construction is expected to level off in 2023, this was a banner year for both industrial construction starts and deliveries, says Bryan Leonard, managing director with real estate capital provider Northmarq. Additionally, Leonard notes that high demand for space is keeping rental rates rising, which should provide developers some offset to higher interest rates.

The Prologis report also predicts a 10 to 15 percent decrease in construction costs next year, which would provide developers with some cost relief too, but not until the backend of the year.

Industrial developers face constrained liquidity from banks due to regulatory pressure on the latter from stress tests, lack of loan payoffs and a general “risk off” focus, according to Achtemeier, who adds that select national banks are still active in the industrial construction loan arena, but capital is generally preserved for top-tier sponsors.

Additionally, updated underwriting criteria is more conservative today than it was prior to the rate hikes, resulting in lower proceeds, higher spreads and tighter loan structures, Achtemeier says. She notes that very large projects are more difficult to finance today than earlier in the year, and syndication risk negatively impacts pricing. Typical loan terms for top-quality, speculative industrial development now feature loan-to-cost ratios of 50 to 55 percent compared to 60 to 65 percent in early 2021.

Debt pricing by banks is generally in the SOFR (Secured Overnight Financing Rate) plus 300 to 350 basis points, according Achtemeier. The impact of the increase in the SOFR index has been dramatic, she notes, resulting in “all-in” construction loan interest rates in the range of 7.5 to 8.0 percent. Banks are also now requiring completion guaranties, and some lenders are asking for interest-carry guaranties.

Some of these new requirements may be due to increased scrutiny by bank regulators of banks’ commercial real estate portfolios, according to Leonard, who concurs that the cost of leverage has increased and bank-rate coupons are generally in the 7.0 to 8.0 percent range.

While construction financing is available at regional banks, it also comes with a higher price tag and lower leverage than the terms offered by big banks and most of the time requires recourse, according to Pontius. “We’ve also seen some creative options starting to surface, such as less expensive, higher leverage construction loans with equity participation or full-stack deals using PACE,” he adds, noting that many preferred equity investors are still in the market, which can solve some of the gap left by the more conservative bank advances.

Since many domestic banks have pulled back on construction lending, alternative lenders have stepped up to some degree to fill part of the void, but the depth of that market is still quite weak, with significantly fewer actionable quotes, says Achtemeier. Lenders providing industrial loans include select life insurance companies, regional banks, debt funds and foreign banks. Some equity sources are also offering capital to fill out the capital stack, as many developers are having some difficulty sourcing traditional joint-venture equity capital, she adds.

Debt funds offering industrial construction loans are pricing loans at about 9 percent, with leverage ratios in the 65 to 70 percent, according to Leonard. Some insurance companies that have launched construction loan programs for the industrial sectors are pricing loans in the 7.5 to 8.0 percent range, with roughly 60 percent leverage-to-cost ratios.

Industrial construction starts have surged to more than 660 million sq. ft. recently, but a large percentage of these starts are expected to be delayed by six to 24 months, on average, according to Achtemeier. She also anticipates that roughly half of the planned development pipeline will be stalled due to the steep increase in the cost of capital, as well as increasing yield requirements and the monitoring of construction cost trends. Achtemeier notes that approximately 28 percent of the industrial projects currently under construction are pre-leased, which represents a slight decline from previous levels.

“The U.S. industrial real estate market was racing toward 1 billion sq. ft. of new product under construction in the third quarter of 2022, but new starts have fallen during the fourth quarter, marking the first reduction since the second quarter of 2020,” adds Matthew Dolly, leader of national industrial research with real estate services firm Transwestern. He notes that prior to the pandemic, new industrial construction starts fell only five times in 40 quarters.

The coming slowdown in construction will add pressure to the industrial sector’s already low vacancy rate.  “We expect a significant undersupply of first-generation industrial space in the second half of 2024,” Achtemeier says.

Current projects under construction will deliver a projected 400 million sq. ft. in industrial space in 2023, slightly outpacing 2022 levels and setting a new record for supply deliveries, according to Pontius.

In fact, new industrial supply will outpace demand nationally in 2023 for the first time since 2020, by a margin of about 70 million sq. ft., he says.

Still, industrial rental growth in 2023 is expected to remain in the double digits, according to Achtemeier, most likely in the 12 to 15 percent range, as a result of near record low vacancy rates across the country.