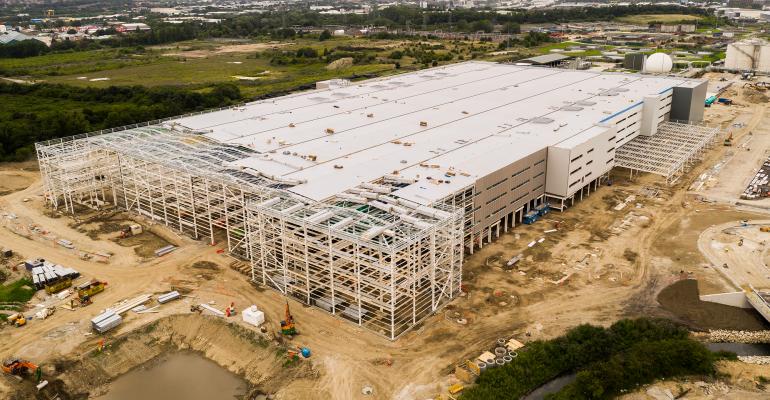 What Impact Are Construction Delays Having on the Industrial Sector?

The industrial development pipeline is at its highest level in years. But developers are facing a host of new challenges.

It’s been one of the hottest years on record in terms of demand for industrial space.

So far in 2022, 100.9 million sq. ft. of new industrial space was delivered to the U.S. market, according to a report from commercial real estate services firm JLL, representing a new record. The 586.7 million sq. ft. of industrial space that is in the construction stage also represents a record, according to the firm’s researchers. But if the current market disruptions continue to cause construction delays, some of those projects might be pushed out, according to industry sources.

Related: Why Industrial Development Costs Have Continued to Spike

The biggest factors causing delivery delays remain supply chain volatility and skilled labor shortages, according to Chicago-based Andrew Volz, construction research manager with JLL. “Delays due to labor shortages are nearly universal still and not likely to resolve in the short term,” he says, noting that unemployment among construction trades remains near record lows and high numbers of job openings persist despite a recent pullback on new projects by some developers.

In fact, the labor shortage is expected to worsen with the injection of a large volume of federal funding for construction projects. While public spending on construction has historically accounted for about 25 percent of overall construction spending, according to Volz, the amount of funding for construction projects in the Infrastructure Investment and Jobs Act (IIJA) at $1.2 trillion, and Inflation Reduction Act (IRA), at $740 billion, represents a considerable uptick that the labor market can’t currently supply enough workers for. IIJA alone is projected to create 2 million jobs annually.

As a result, “Competition for labor, the duration of projects, and the time to spend this cash will all increase,” Volz says.

Plus, public construction projects will not be the only competitors for construction workers, he notes. Other industries are competing for the same blue-collar workers, in particular, the warehouse/logistics sector. The wage gap between the two industries is shrinking and strong unionization efforts are underway in the logistics sector, Volz notes. So “Wages are going to need to increase to address inflation and competition.” On an adjusted basis, the current average construction wave is 2 percent below what it was pre-pandemic.

On the other hand, construction materials costs are stabilizing and are trending down overall for the first time in a long while, but they are a game off “what-a-mole,” according to Volz. He notes that the materials that saw the biggest price spikes in 2021, lumber and steel, are seeing moderating prices, but now the costs of glass and concrete have gone up due to sand shortages and higher energy costs.

Of course, materials cost and labor shortages are not the only challenges facing industrial developers.

Global real estate services firm Newmark Group recently reported that getting the entitlements in order and the construction process overall are taking five months longer on average nationally than in pre-pandemic times.

The report noted that supply chain and sourcing problems have created volatility in construction materials supply, which has been exacerbated by geopolitical conflict and recent pandemic-related shutdowns in Asia. As a result, lead time for getting roofing materials, for instance, is now 30 to 50 weeks.

Meanwhile, a shortage of workers at government building departments is delaying the entitlement process, while a shortage of staff on construction sites is stretching building schedules. Newmark researchers note, for example, that in the Chicago market, which has been the worst affected in its review of 15 U.S. industrial hubs, the entitlements to completion process is currently taking 80 percent longer than it did in pre-pandemic times. In Boston, it’s taking 51.4 percent longer and in Denver 33 percent longer. In addition to all that, local opposition to the development of new warehouses in some communities is also delaying projects. All these challenges are causing some industrial developers to pull back on new construction starts, Newmark report found.

Overall inflation and higher interest rates are also adding to the skyrocketing cost of new construction, up 22 percent year-over-year in May. Commercial real estate services firm CBRE predicts another 14.1 percent increase in construction costs this year, then cost increases are expected to stabilize in 2023 and 2024 to between 2 and 4 percent annually.

“The good news is that construction financing is still generally available for quality speculative and build-to-suit projects, assuming sponsorship is solid and the local supply/demand fundamentals are compelling,” says Los Angeles-based Valerie Achtemeier, vice chairman of capital markets with CBRE.

She notes, however, that the process to secure actionable construction loan quotes is taking longer now for some industrial projects, depending on the status of the general contractor contract, final cost estimates, the expected completion timeline, plus potential interest carry implications if construction is delayed. “Now more than ever, it is very imperative to have a firm handle on the timeline and have the bids in place to optimize the construction loan quotes and expedite timing,” Achtemeier notes.