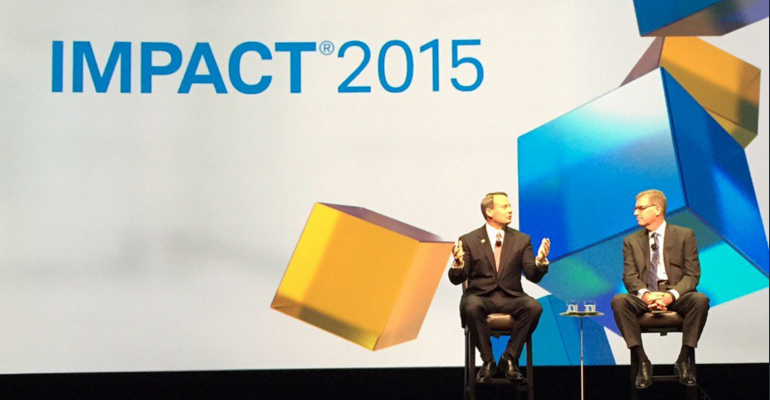 When Charles Schwab hosted its first IMPACT conference 25 years ago, Walt Bettinger was a Schwab advisor and a client, but couldn’t afford to attend the industry event.

Wednesday morning, Bettinger took the stage at the 25th IMPACT conference as Schwab’s CEO to let 1,800 advisors and thousands of other attendees know 2015 has been one of the company’s most successful years. The company added $100 billion in net new assets for the fourth year in a row, Bettinger said, and it did so by the end of the third quarter.

And there is still plenty of room for more.

“There is at least $23 trillion at the traditional firms that we want to shake loose,” Bettinger said, echoing statements made in Schwab’s 2015 Benchmarking Study.

One way Schwab plans to shake it loose is with technology. Schwab released its own direct-to-consumer robo advisor, Intelligent Portfolios, in March and followed with a white-label version for advisors in June. Although Bettinger thinks the effect of algorithmic investing may be the most “overhyped” topic in the industry, he said robos could help advisors move down market and make firms more flexible.

And advisors seem to have gotten the message. A year ago, when Bettinger’s IMPACT speech implored attendees to not fear an upcoming robo, 50 percent of advisors said digital advice could have a role in their practice. Now that number is up to 70 percent.

Bettinger envisions Institutional Intelligent Portfolios paving the way for a “custodian 2.0” and sees the potential to add mutual funds and individual stocks to help advisors serve a broader swath of clients, even ones who would traditionally be targeted by Schwab’s retail side.

“It’s not about deciding where clients should go,” Bettinger said. “It’s about insuring clients have the best possible service to meet their needs.”

He said the fact that other firms are acquiring robo advisors is a testament to Schwab’s success. "ETF manufacturers want to copy Institutional Intelligent Portfolios by building thier own robos," he said.

Bettinger brushed aside any notion that direct-to-consumer robo advisors are a threat and said the business model of the stand-alone robos is to be acquired, and suggested that some of the negative reaction to Schwab's entry into the market was the fact that the brokerage firm decided not to buy but to build its own.

@NexusStrategy Almost feels like @WaltBettinger is suggesting one or several robos approached Schwab TO be bought... #SchwabIMPACT

Also @WaltBettinger suggested "emotionalism" after Schwab robo launch was result of firm decision to build rather than buy. #SchwabIMPACT

He said current model of workplace retirement plans has failed participants. The target-date fund is helpful, he said, but a "one-factor" model that isn't suitable for all investors. Giving advisors the ability to give customized advice inside retirement plans with a managed account is the future of 401(k)s, he suggested.

"The current 401(k) system works for the employers, asset managers and record keepers, it works for everyone but the employee."

Despite the good year, Bettinger said inaction by the Federal Reserve on interest rates has been the biggest challenge for the industry.

“It’s been tough; you can’t deny the impact on us,” Bettinger said. “Fifty percent of our revenues are impacted by the Fed’s experiments.”

Bernie Clark, head of Schwab’s advisor services, kicked off the keynote presentation with perennial appeals to open the industry up to a broader demographic, and the need to cultivate “the next generation of industry leaders."

Clark hinted at a new initiative with Deanna Katz at the University of Texas to “reach even deeper into the educational system to work with high school students to create your talent for the future.”