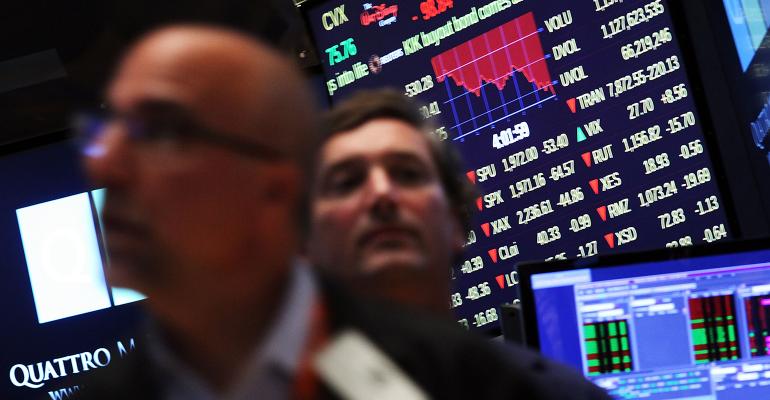 An inverted yield curve doesn’t portend an imminent recession. But it may be the trigger that leads to another flash crash.

Many investors see glimmers of recession signals in the flattening long-term yield curve, but the Federal Reserve says this curve isn’t the Delphic indicator that many assume it is. Regardless, if the curve inverts, there’s a strong likelihood that this will ignite a market flash crash, catching unprepared advisors off guard.

The flattening curve is an obsession of the financial media because many investors somehow dogmatically believe that inversion would mean imminent recession, bringing an immediate negative market reaction because of earnings fears and woes. However, the direction of an historically more reliable yield curve for predicting recessions is sending no negative signals.

The Fed explained this in June in a posting on its website titled “(Don’t Fear) The Yield Curve,” an apparent homage to the Blue Oyster Cult song title, “(Don’t Fear) The Reaper.” (Who said government economists can’t be clever?) The posting discusses the near-term forward spread—the difference between near-term forward rates (market expectations of future rates) on Treasury bills six quarters out and the current yield on the three-month Treasury.

The authors present extensive data to makes a strong case that this spread’s curve has proved superior to the long-term curve in predicting recessions. They state a conclusion whose upshot may be unacceptably rosy for long-term-yield-curveonoiacs: “The current level of the near-term forward spread does not indicate an elevated likelihood of recession in the year ahead. Neither its recent trend nor survey-based forecasts of short-term rates point to a major change [in the economy] over the next several quarters.”

Even if you have faith in the Fed’s analysis, this is still no reason to doubt that, recession aside, an inversion would have significant consequences in a market where perception often becomes reality.

As large institutions’ trading strategies must reflect likely investor reaction, their automated trading algorithms have got to be geared to sell in reaction to an inversion. This could easily trigger a flash crash—an intraday event that, while brief, can cause serious pain.

With algorithms teed up for this scenario, and with the long-term yield curve continuing to flatten, vulnerable advisors and traders would be well-advised to heed the cautionary tale of the flash crash of Aug. 24, 2015. On that day, algorithms triggered a sell-off in which 1,278 stocks caused a gap down of more than 5 percent at the opening. The New York Stock Exchange then topped trading on those stocks, but exchange traded funds continued to trade. Without knowing the underlying value for reopening, specialists abruptly dropped their bids on ETFs by approximately 35 percent. And this lowered prices on stocks once trading on them resumed.

Negative views are averaged out in ETFs, regardless of how worthy they may be. It’s in their nature to buy and sell all holdings indiscriminately—the good, the bad and the ugly. Thus, indexes tend to take the full brunt of corrections, however brief.

The lesson from 2015 flash crash is that the market was only liquid at a deep discount and that stop loss orders can’t protect you from intraday ETF and stock price anomalies.

Armed with this perspective, stock pickers (especially value shops) can position not only to avoid pain and even profit if, recognizing a true flash crash for what it is, they have a sound pre-crash strategy to scoop up shares of quality companies at bargain basement prices.

Since 2015, market conditions have become more conducive to flash crashes, given the right spark, such as a curve inversion.

The ranks of specialists and floor brokers have become even thinner, and with Dodd/Frank eliminating “prop” desks at the major banks, there are fewer buyers of last resort; liquidity from many sources has continued to dry up. Further, there are about half as many publicly traded stocks today as there were 20 years ago, while ETF assets, concentrated among fewer stocks, have grown from $100 million to $4 trillion over the last 30 years. This has increased the correlation among stocks, especially during periods of market stress.

Further, recent data indicates that from 60 percent to 90 percent of daily equity trading is algorithmic or high-frequency, meaning decisions are made in microseconds by computer programs, not humans.

All of this points to a scenario where, if algorithms react to an inversion of the long-term curve by selling apace with Dr. Strangelove-like autonomy, a flash crash occurs.

If you consider volatility a tool to be used, a downdraft like the one in 2015 provides an opportunity to buy good companies that have been unfairly punished. And if you accept the Fed’s rationale that the long-term curve’s direction is much ado about nothing—and so, have confidence in the economic outlook suggested by near-term forward spread, then when you buy in a flash crash, you might want to buy all the more.

Meanwhile, those who cling to the long-term curve logic, believing recession is imminent, could be helping you by pushing shares downward. Yet, if economic factors reflected in the near-term forward spread manifest themselves, this could turn a dead cat bounce into a healthy rebound, enabling Fed believers to take profits sooner rather than later.

If you can’t quit the assumption that inversion will soon be followed by recession, then you’ve probably got bigger worries than conditions ripe for a flash crash. In that case, you might want to protect your clients from recession with floating rate funds, bank stocks, dividend stocks and equity REITs invested in warehouses, apartments and low-priced hotels.

Keep in mind that all these considerations are contingent on the long-term yield curve actually inverting. Just because it’s flattening, doesn’t mean the normal hump shape will start turning into a u-shape. Even if this curve gets as flat as western Kansas, it could stay that way for a long time. This happened from 1994 through 1998. During that period, the S&P 500 went from 450 to 1,300, proving the market can still ascend during flattening or flattish curves.

Even though this was only 20 years ago, there’s a key new factor: the internet. Because of an abundance of financial websites, the financial media is now a snarling, relentless 24/7 beast with SEO that presents answers to every question and web alerts that gives us information we didn’t request; it won’t leave us alone. (If it did, we’d be starved for its nettlesome electrons.) As a result, there’s more fuel for popular fears than there was 20 years ago, meaning more sustenance for paranoia that the flattening curve will invert and bring recession. This pent-up fear could increase the potential for market disruption, however brief, if inversion occurs.