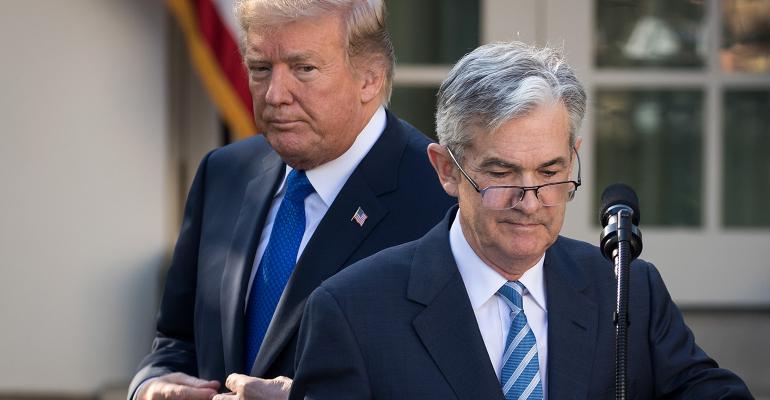 Flattening Yield Curve Same as it Ever Was

It doesn’t matter who is in office.

One should hardly be surprised by Trump’s admonitions of the Fed, specifically his pick for Chairman, given his tendencies towards people who don’t do exactly what he wants. I’m not sure what Trump’s issue is given the generic state of the stock market and economy overall. If he were a thinking man on the topic, surely, he’d be satisfied with the tax and spending plans he has at his back and wouldn’t quibble about the Fed hiking.

The irony or self-serving cynicism of his critiquing Yellen for keeping rates too low merely to boost Obama’s legacy comes to mind. "Any increase at all will be a very, very small increase because they want to keep the market up so Obama goes out and let the new guy ... raise interest rates ... and watch what happens in the stock market." Then again, maybe he’s talking position.

To those who say the implications of a flattening yield curve is different this time around, I offer up Atlanta Fed’s Bostic on the subject. He said that an inverted curve is indeed a concern and something he’d vote against if he saw policy going that way. A number of Fed officials are giving due respect to the curve’s predictive capability, including Powell and Bullard among others. You may not agree with their concern, but to the extent it translates to policy you have no other choice in the matter.

Those who say this time is different rely on two major themes. One is that the Fed’s use of the balance sheet has made long rates lower than they otherwise would be and that has been exacerbated by foreign central banks doing their own version of Quantitative Easing. The second is that because of monetary policies, US rates are that much more attractive drawing in foreign money. I don’t disagree that those are major influences, but they ignore the Fed’s hiking and its “targets” (inflation, dot plots) putting upward pressure on short rates even more.

The balance sheet story also has an expiration date. I’m being cute here, but first the reduction is well under way without observable market consequences that I can identify. There’s a growing chorus out there suggesting the balance sheet reduction won’t last too much longer due to liquidity needs.  Further, if we agree that the balance sheet will be larger than pre-crisis due to various factors (money in circulation, for example) and that the portfolio will largely be made up of Treasuries, then there’s a good case for the current level of Treasury holdings not have much further to go; I can imagine the reduction in Treasuries ending by 2020 and sooner if global liquidity needs concern the Fed.

What we don’t know is the maturity breakdown goal, but I suspect it will largely be in bills (again the liquidity thing) though in a recession would likely move out the curve.  Again.

Specs are short. I used to pay more attention to the Commitment of Traders data, and I know a lot of smart people do still. Increasingly I’m hearing from a lot of less-than-smart people about deep shorts in the whole construct which I think is visually very interesting but fundamentally hard to understand. Let me explain.

First, this report represents speculators who don’t have an offsetting position in the cash market, i.e. Treasuries. It doesn’t mean the short is not a hedge against something else. The CFTC says so; A trader may be classified as a commercial trader in some commodities and as a non-commercial trader in other commodities. I believe that means the deep short in TY isn’t necessarily a pure naked short that risks a brisk covering rally, but a position against something else. If I’m wrong, you should be bullish.

I’ll observe some things that don’t mesh with that view.  First, the Daily Sentiment Index is very neutral and remains my favorite contrarian proxy. That seems about right. Second, I was talking with Ian Lyngen, top rates strategist at BMO, on the topic and he noted that there’s been covering in the front end in the same data so maybe the market is thinking the Fed is closer to “done” and that’s reflected in the shorts further out the curve, though not entirely. Bond specs are a little short having run off a long that lasted from last May to this one, but hardly “deep” and specs have been short fives for over three years, and deeply so now. I can make up stories, but it seems fixating on this would require more creative speculation than insight.

The easy thing is to ignore it unless you really have some grasp of what’s going and, instead, consider the price action (sideways) in light of the DSIs. Nor, by the way, is there much evidence in the repo market of a short base.  I hope that’s not too much of a copout. Per comments in recent days by, my “focus” is on these Fed folks talking more and more about the yield curve, specifically inversion, as a cause for concern. To the idea of naked shorts in TY or ultras, just bear in mind that such commentary still allows for a good three or four more hikes by which time, surely, the yield curve will be well inverted.