/sites/all/themes/penton_subtheme_wealthmanagement/images/logos/footer.png
Recent
Recent
Five Must Reads for the CRE Industry Today (May 15, 2021)
May 14, 2021
SEC Charges Texas RIA in $3.7M Fraud
May 14, 2021
How to Evolve Your Financial Reports to Get Back in the Driver’s Seat
May 14, 2021
N.Y.’s Biggest Mall Borrowed Big and Now Can't Pay
May 14, 2021
Featured
Poll: 15 Classic Books on Investing and the Markets
Apr 03, 2020
Fifteen Must-Listen Business Podcasts for Advisors
Aug 14, 2020
25 U.S. Markets Adding the Most Multifamily Units This Year
Feb 03, 2021
The Top Colleges for Financial Planning
Oct 03, 2019
The Daily Brief
brought to you by
News>Industry

Donald Trump's campaign announced its 13-member team of economic advisors, and the list includes a number of uber-wealthy personal friends and business associates of the Republican Party's presidential nominee. Among those on the list, according to the Washington Post, are hedge fund billionaire John Paulson; bankers Stephen M. Calk and Andy Beal; financier Seven Feinberg; oil billionaire Harold Hamm, who was a top energy advisor to Mitt Romney's 2012 campaign; and Dune Capital Management CEO Steven Mnuchin, who is Trump's national finance director. The list of advisors mirrors Trump's pitch that business leaders know what it takes to save the middle class, Jim Tankersley writes. However, while Trump has repeatedly criticized Democratic Party nominee Hillary Clinton as being in the pocket of Wall Street, his team is heavy with hedge fund managers, bankers and real estate speculators, with Paulson the most prominent among them.

The Value of the Dollar 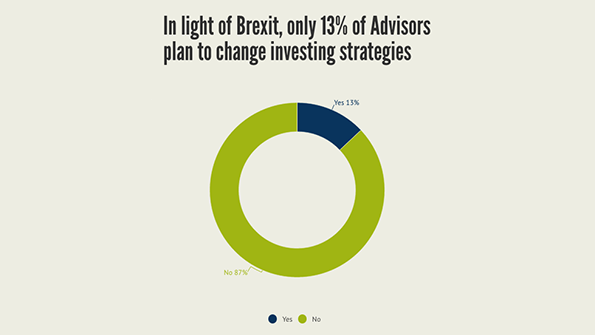 A Jefferson National survey found that despite the initial market shock caused by the U.K.’s decision to leave the European Union, most financial advisors agree that it wont impact their clients’ portfolios. Eighty-five percent of advisors have not revised their strategy in response to Brexit, and 87 percent don’t plan to even if parliament ultimately decides to stay in the EU. What’s more, most advisors agree with the Brexit decision, and 62 percent believe other countries will follow Britain’s lead. Jefferson National president Laurence Greenberg said the volatility driven by Brexit actually reinforces the value of advisors to individual investors. “Faced with increasing uncertainty at home and abroad, investors’ outlook for the year is somewhat tentative—but according to our 2016 Advisor Authority study, investors who work with advisors are far more optimistic than those who do not.”