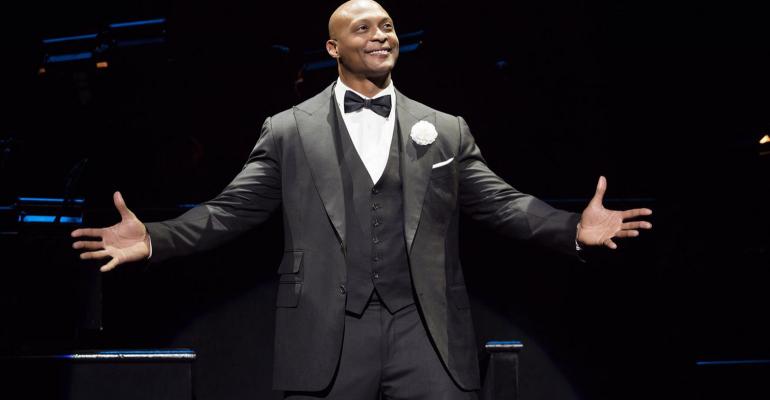 Former Heisman Trophy winner and NFL running back Eddie George announced that he plans to open an advisory firm called Edward N. George Wealth Management to help young professional athletes with their finances. “When I came into the league, I didn't understand all the financial terminology,” George said. “I lost some money in personal investments that I shouldn't have. I want kids coming out of college to be more prepared for the financial side.” Since the football star retired in 2004, he has become a silent partner in a landscape and architecture firm, opened restaurants and sports bars, acted (he’s finishing a six-week engagement in “Chicago” on Broadway), and been a football commentator. He earned an MBA from Northwestern’s Kellogg School of Management in 2009, and over the last year completed his Series 7 and Series 66 exams. George will be managing partner of the new firm alongside Greg Eastman, his financial advisor of 20 years, and First Financial Equity Corporation, a firm in Scottsdale, Ariz.

Rob Arnott, chairman of investment firm Research Associates (and winner of the 2015 Wealth Management Madness bracket tournament) is going against the smart beta strategy he once pioneered. Arnott, according to Brett Arends of MarketWatch, believes that high-quality stocks have become far too expensive. Instead, Arnott is championing value stocks—those with low future-growth prospects—because he sees them at big discounts. Why? Because smart beta has become so popular it’s due for a crash, Arnott says. “Smart beta, like anything, is subject to the basic laws of financial gravity, generally known in the trade as ‘mean reversion,’” Arends writes.

Sanctions on the Rise 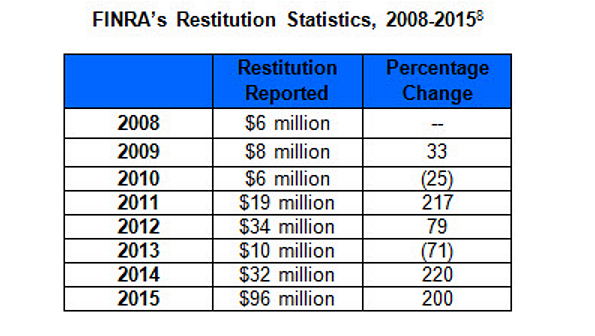 Wall Street's watchdog dramatically increased the level of restitution ordered in 2015, tripling from a year ago, while fines levied against firms declined from 2014’s total. According to Sutherland Asbill & Brennan's annual report, FINRA ordered firms to pay $96 million in restitution to harmed investors in 2015. That was a new record and a 200 percent increase from the $32 million ordered in 2014. Meanwhile fines against firms totaled $94 million, a 30 percent drop from the record-breaking $134 million assessed in 2014. These sanctions came from the 1,462 disciplinary actions FINRA opened in 2015, up nearly 5 percent from the number of cases reported in 2014.

With all of the recent news about IRS data breaches and the service’s lacking cybersecurity measures, it’s easy to forget that tax preparers are quite capable of leaking sensitive taxpayer information all by themselves. According to a new study by the Online Trust Alliance highlighted by the Wall Street Journal, six of 13 major IRS-approved tax preparers surveyed, including industry heavyweight Jackson Hewitt, demonstrated major security flaws. The study compared the security measures of each preparer with those in place at other financial institutions and assigned grades accordingly. The alarming results shine a spotlight on the ever-evolving nature of cybersecurity and the need for institutions to constantly update and upgrade their systems.