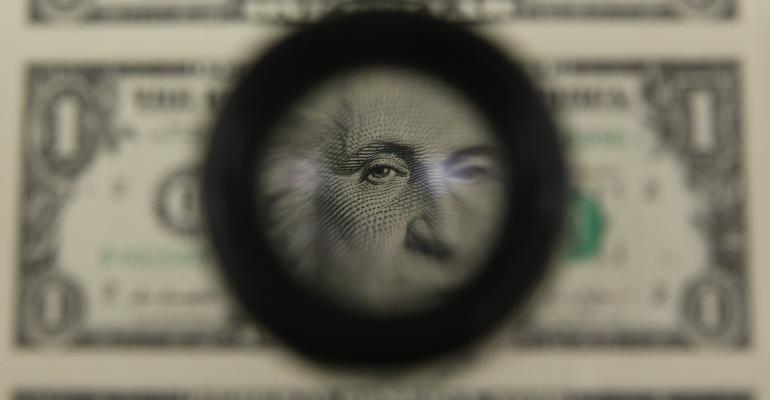 If Advisors Had A Dollar...

What would advisors do with an extra dollar? Most would put it towards growth opportunities, according to the 2015 Scottrade Advisor Services Study. This was the top answer among advisors of all sizes, although those with between $10 million and $100 million in assets were the most likely to spend that dollar on growth. Brian Stimpfl, a senior vice president and head of Scottrade Advisor Services, said that it’s more than bringing assets into the business; it’s about embracing the opportunity to change. “The goal is not to grow for growth’s sake, but to look for ideal ways to create efficiency and expand your business through investment in people, process and technology.” Investing in technology and talent management were, respectively, the second and third most popular areas advisors would spend that extra dollar.

Retail investors are known to buy at market peaks and sell off at market lows. But in November, 70 percent of investors on Openfolio, a free platform where people share their investment portfolios, made money. The average investor's portfolio on the platform gained 0.6 percent during the month and beat the S&P 500 Index. Tech stocks created the most value for the average investor last month, including Netflix (up 18.6 percent), Amazon (up 9.1 percent), and LinkedIn (up 14.7 percent). Meanwhile, the biggest wealth destroyers in November were GoPro (down 28.5 percent), SunEdison (down 56.9 percent), and the National Bank of Greece (down 81.7 percent).

Cutting Off the Spigot

Democratic lawmakers who support the Department of Labor’s fiduciary proposal are seeing their campaign contributions from the financial services industry dwindle. Securities industry contributions to House Financial Services Committee Ranking Member Maxine Waters dropped to $2,000 so far this year, down from the $88,000 she raised during the last cycle, Politico reports. Stephen Lynch (D-Mass.), who also sits on the committee, has received only $8,750 so far from financial firms, down from the $86,225 he raised last year. “It’s been ugly,” Lynch said of the decrease. But one senior industry executive, who declined to be identified, said lawmakers should not be surprised. “The thing that infuriates the industry is there are hundreds of thousands of financial advisors who do this and they are incensed by Democrats and the administration referring to them as crooks and weasels.”

Doctors Are Failing At Retirement

Medical school debt is keeping physicians in the United States from saving more money for retirement. According to Fidelity Investments' Money FIT Physicians Study, nearly half (48 percent) of doctors are not setting aside the recommended 15 percent of income for retirement, Healthcare Finance News reports. They're only setting aside 9 percent, and 71 percent of the 13,330 physicians surveyed said they are not contributing to non-qualified plans outside of work. That's all despite the fact that doctors making an average of $300,000 a year. The study attributes the lack of savings to the high amount of student debt physicians are carrying; 84 percent of graduated medical students shoulder more than $176,000 in college debt. Time is another issue. Sixty-one percent said they are confused about how to invest and are not taking advantage of guidance offered at work, primarily because they don't have the time to look.