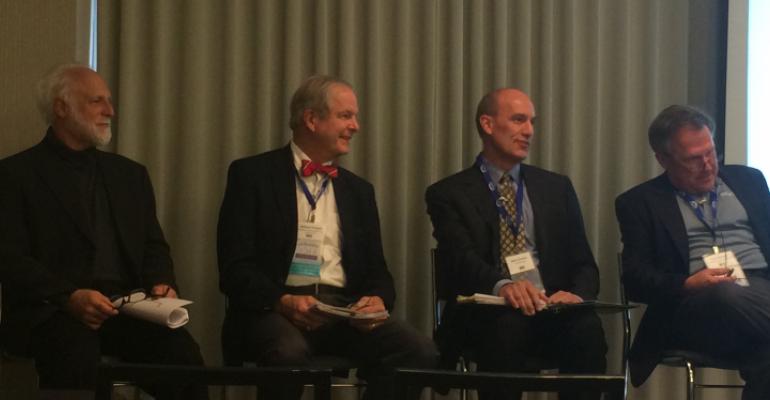 The registered investment advisor industry needs a new strategy to protect the existing fiduciary standard that’s in place and the advisors who operate under it, said TD Ameritrade Institutional’s Skip Schweiss and other fiduciary advocates at NAPFA’s fall conference in Charlotte, N.C. this afternoon. The brokerage industry, after all, outspends the RIA industry. SIFMA spends $2 million a year in lobbying dollars, while the Financial Planning Association spends $40,000, said Bill Prewitt, founder of Charleston Financial Advisors.

The panelists took particular aim at the financial press, which they say has muddied the waters by labeling FINRA-registered brokers as advisors. Bob Veres, financial writer, commentator and publisher of Inside Information, said the press writes about what will excite the public, giving coverage to “white noise,” such as stocks, bonds and annuities. But that’s a brokerage mentality, he added.

But Schweiss, managing director of advisor advocacy and industry affairs at TDAI, said the industry hasn’t done a good job of giving the press the real story about how the brokerage industry operates and the difference between a fiduciary advisor and a broker. The press wants the true story, he said.

Knut Rostad, co-founder and president of the Institute for the Fiduciary Standard, agreed that the industry hasn’t done a good enough job of making the fiduciary issues accessible to the press.

Advisors in the audience during the session brought up letter writing campaigns as one strategy to get the regulators to understand the RIA industry’s side. Rostad was skeptical that letter writing would do any good, and the panelists agreed that some advisors would be reluctant to send letters if they’ve never been audited.

Veres said NAPFA could very well be the organization to bring professional standards to the industry, and draw a line between brokers and advisors. But right now, the organization is too small, at about 2,500 members. NAPFA needs to build economies of scale and develop more resources to accomplish it, he said.

What do you think? Is the financial press doing a good job covering the fiduciary debate? What should be the RIA industry's new advocacy strategy?