/sites/all/themes/penton_subtheme_wealthmanagement/images/logos/footer.png
Recent
Recent
Financial Planning in the Era of the Great Resignation
Jan 14, 2022
What Makes a Successful Advisor Transition
Jan 14, 2022
Seven Must Reads for the CRE Industry Today (Jan. 14, 2022)
Jan 13, 2022
Warren Renews Criticism of Private Equity’s Role in Housing
Jan 13, 2022
Featured
The 10 Best and 10 Worst States in Which to Retire in 2021
Jul 15, 2021
Poll: 15 Classic Books on Investing and the Markets
Apr 03, 2020
25 U.S. Markets Adding the Most Multifamily Units This Year
Feb 03, 2021
Fifteen Must-Listen Business Podcasts for Advisors
Aug 14, 2020
Rulebook
brought to you by 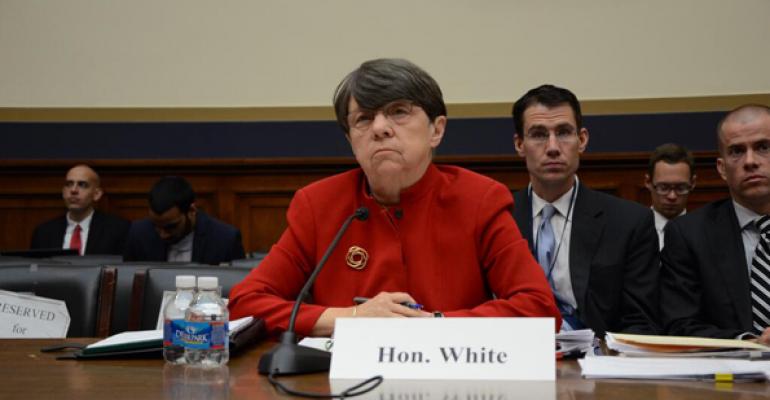 Chair Mary Jo White called the fiduciary standard an “extraordinarily high priority” for the Securities and Exchange Commission, saying it’s her goal to see a decision on whether to impose a uniform standard this year.

Speaking before the House Financial Services Committee on Tuesday, White told Ranking Member Maxine Waters (D.-Calif.) she had prioritized the issue within the staff, and gone back and forth on the range of options available. “It’s an extraordinarily important issue and I’ve prioritized it for the staff,” White says.

While White declined to give a specific timeline, advisors can expect the uncertainty to lift by the end of the year. “It is a priority of mine to have the Commission reach a decision on this very important issue in this year,” White says.

The SEC chair also noted that the regulator is in contact with the Department of Labor over that agency’s proposal on the definition of a fiduciary under ERISA. White told Congressman Gary Peters (D.-Mich.) that she understands the potential consistency concerns between the two different rules. White also noted SEC economists are in in talks with economists at the DOL on the issues around the economic impact of the potential regulation.

Further, White also told the committee she personally has been involved in making sure the lines of communication between the two agencies on the issue are open, participating in two in-person meetings with DOL Secretary Thomas Perez, as well as a conference call.