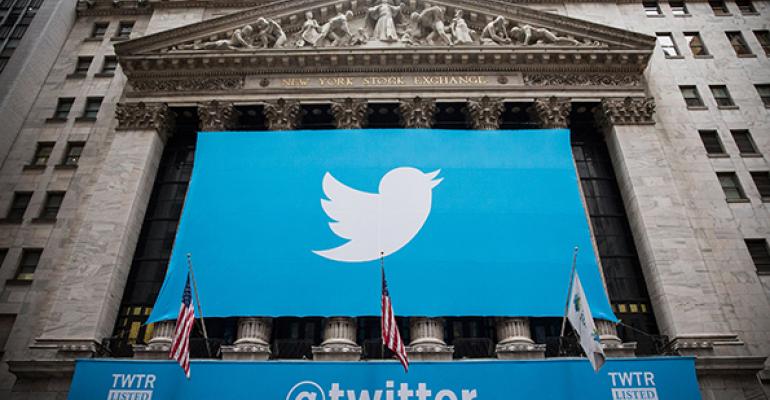 Market Prophit, a company that crunches social media data looking for trends, is getting into the stock market game. The firm is looking for an advisor to create a mutual fund based on its "Social Media Sentiment Index," which tracks tweets using a "cashtag," a ticker symbol preceded by a dollar sign. The fund will include the 25 most-talked about stocks - with a market cap of $1 billion or more - for three months. The chosen stocks are either bought or sold short and rebalanced based on the daily tweeting trend. Experts are not only calling the fund a gimmick, but also potentially dangerous. "While many folks seem to think that stocks in the headlines outperform others, my recollection from financial economic research is that the reverse is true; stocks in the headlines, whether for good or bad reasons, tend to underperform stocks that are under the radar," said Mark Salzinger, editor of The Investor's ETF Report. It's all but assured that the index will always include the likes of Apple and Google, Market Prophit President Igor Gonta told Chuck Jaffe of MarketWatch.

Lorelai and Rory Gilmore may be coming back for a limited-series revival on Netflix, but first they need to check in with a financial advisor in order to afford their Stars Hollow lifestyle. According to Money magazine, the economics don’t add up. The publication calculated that Lorelai Gilmore’s home would cost about $2.8 million, not to mention the $30,800 in property taxes each year and the duo's coffee and takeout addictions. But Lorelai claims she’s independent, only accepting funding from her parents for Rory’s education. That seems an unlikely scenario for a single mother making an estimated $62,000. Either she played the market well or, more likely, racked up some serious debt.

There's Only One Old Man Who Millennials Really Listen To

When it comes to taking investment advice, Millennials see investment advisors like they do their grandparents: Nice to spend some time with, but they're not really going to listen to them. Save for one: Warren Buffett. The Oracle of Omaha was the one person a group of Millennial bloggers admitted they would take financial advice from (save Lebron James, who also made the cut,) according to Chris Carosa on BenefitsPro.com. "This panel of millennials who write on financial topics for other millennials offers a major revelation to financial professionals," Carosa writes. "No matter how much experience we have, no matter how right we are, we’ll never get through to millennials." That is, unless you're an uber celebrity or a Millennial yourself.

Only Five States Receive 'A' Grade on Personal Finance Education

If information from a new study is any indication, the U.S. has a long way to go before people truly manage their money effectively. According to a report card released by the Champlain College Center for Financial Literacy, only five states require students to study personal finance for at least a semester. These states – Alabama, Missouri, Tennessee, Utah and Virginia each received an 'A' grade. The study specifically commended Utah, which supports general financial literacy as part of a funded mandate. But many states require little to no personal finance education, with 26 states receiving a grade of 'C' or worse, amounting to 38.9 percent of the U.S. high school population. The study notes that many states with poor grades do have advocates in their legislature who are trying to add financial planning to a school's curriculum. "The youth of America need to learn, even before entering college, how to develop the lifelong habits necessary for a healthy financial life," said Donald J. Laackman, President of Champlain College. According to Laackman, the report card was initially developed in 2013 and has since spurred several states to improve their personal finance education efforts.