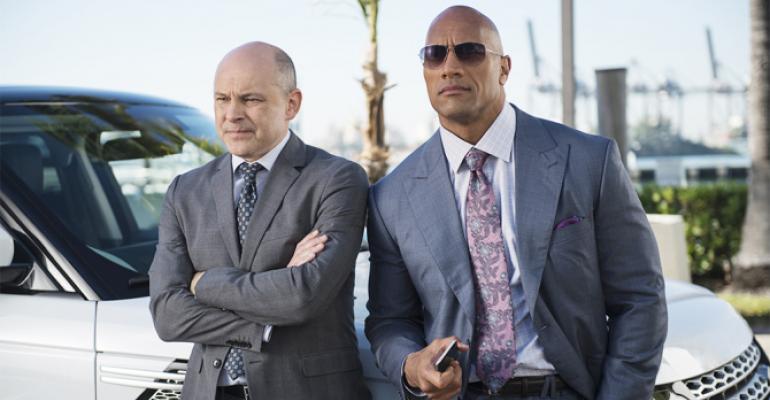 Episode two slowed down the action in favor of some much needed character development. Spencer Strassmore (Dwayne “The Rock” Johnson) is the middleman in a contract renegotiation for his soon-to-be client Vernon Littelfield (Donovan W. Carter), a defensive tackle for the Dallas Cowboys. Littelfield desperately needs the money after receiving a $300,000 loan from Strassmore in last week’s pilot episode to fuel his extravagant lifestyle and support his growing number of family and friends.

Meanwhile, Strassmore is dealing with his own cash shortfall and attempting to cajole Littelfield into signing the necessary authorization papers  naming Strassmore and his firm, Anderson Financial, as his financial advisors.

“Vern and his entourage seem like a typical scenario with many players,” says Gary Kloppenburg, who is currently serving as an assistant coach for the Indiana Fever, a WNBA team. “Certainly family and the many people with their hand out is a common theme among pro players. I think while a lot of players probably have it under control, the constant pressure to take care of everyone around is there.”

But as Strassmore says in the show, Littelfield “has clearly redefined what [broke] means.” And the athlete proves it by taking his family and friends for an extravagant brunch … which Strassmore pays for as a goodwill gesture in seeking to sign the successful athlete.

“To some athletes, you’re just someone who can pay the bill and other expenses,” says Palash S. Islam, owner of California-based Synergy Financial Group and an advisor to several professional athletes. “I've had prospects tell me that if I don't loan them money (after they blew millions) that they wouldn't work with me. I told them why do you want to get out of debt with more debt—that line of thinking got you to where you are today.”

This week’s episode also focused more on Joe Krutel (Rob Corddry), Strassmore’s colleague and a financial advisor at Anderson Financial. The fast-talking, fantasy-football playing advisor pushes Strassmore to close the deal with Littelfield and open up new opportunities to other players. Yet he also provides a level-headed approach when Strassmore overreaches.

“I like the pressure from the Rock’s head advisor; always pressuring for sales and not relationship,” Islam said sarcastically. He adds that sadly it’s typical for firms looking to work with pro players to hire someone “famous” in order to gain access to their relationships with other athletes. “Happens all the time and rarely works,” he says. For these firms, “at the end of the day, it's ALL about sales and revenue. The client is secondary.”

Tom Reynolds, co-founder of CRA Financial and advisor to a number of MLB, NHL and NFL players, says Krutel comes off as “shady and uncaring.”

But that doesn’t mean players should make it easy to take advantage. When Strassmore does eventually get Littelfield to sign the authorization papers, the player only glances through the document and signs on the spot. “He didn't even read what he signed; he just went off ‘trust,’” Islam says. And the worst part?  Strassmore didn't even offer or want to read it to him. “A good manager should have,” he says.

“I would never sign a document that fast like that dude did,” says Bobby Jones, a former NBA player who now plays for Italy's professional basketball league.

And yet the show does a credible job showing how difficult it can be to choose a trustworthy advisor, Jones says. “Honestly for me I can't tell you you just have to take a chance and go with your gut,” he says. “Obviously you have to do some research, but even with that, somebody can manipulate you and your money.”