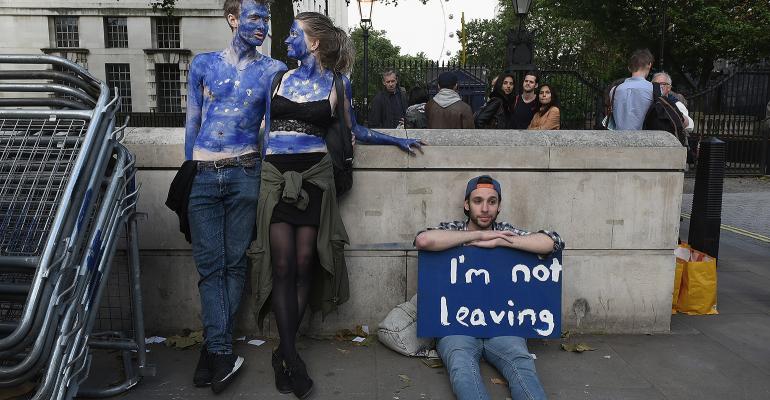 <p>A young couple with their bodies painted like the EU flag protest in front of Downing Street in London the day after Britain voted to leave the European Union.</p>
Investment

Britain’s surprise vote in favor of leaving the European Union caught markets off guard. Here, a round-up of the best commentary from asset managers on the implications of the move.

“The question is whether short-term volatility will extend into something much worse. It certainly could, especially in Britain itself. But for the U.S., the volatility is likely to be much less worrying. For longer-term investors, these declines are not worth fretting about and, in fact, can be buying opportunities.

I suspect that, in a year or two, we will look back and wonder what all the fuss was about. I am quite certain that, five years from now, that will indeed be the case. For most investors, the biggest risk is overreacting to short-term noise.

Keep calm and carry on.”

“We see the severe downside movement in equity markets as an opportunity to buy. Markets often overcorrect, and we see the accommodative push from central banks as supportive to equities in the near term.”

“The extreme levels of fear suggest to us that true investors with multi-quarter time horizons are looking at a very attractive period in which to invest in equities, and our multi-asset portfolios continue to overweight equities. That positioning has, of course, hurt recent performance, but we continue to believe that an earnings-driven, PE compression bull market will ultimately be the story for 2016/17.”

“While not an official component of the Fed’s dual mandate, global market stability has been a significant factor in determining the appropriate pathway for monetary policy here at home. The uncertainty and volatility resulting from the Brexit will no doubt serve to exacerbate the “cautious” stance of the Federal Reserve, taking a near-term rate increase off the table. We have long argued the still-fragile nature of the U.S. economy precluded the Fed from raising rates anytime soon. Against the backdrop of severe volatility in the global marketplace, coupled with uncertainties surrounding the prospects for growth in the U.K. and Europe in the aftermath of the Brexit, the Fed has no other option but to remain sidelined for the foreseeable future. It will take some time — months, if not longer — for the effects of the Brexit to be fully understood and the resulting volatility to subside, as well as for the domestic economy to signal it is back on a sustainable moderate pathway. In other words, get comfortable; rates are going to be sluggishly low for some time.”

“There’s an old saying that goes: ‘Fool me once, shame on you. Fool me twice, shame on me.’

Whether it’s the slower-growth Chinese economy, Greek insolvency or European banks, external shocks to U.S. markets and the economy have become par for the course. What we have seen from each of these events, however, is that beyond the initial volatility, there has been relatively minor damage to the overall prospects for steady, albeit slow, global growth.

As sure as markets turned on fears about those events, investors will doubtless get a case of the jitters as we enter the unknown territory of a post-Brexit world. We expect, however, that markets will recover in similar fashion, presenting opportunities for patient investors.”

“Expect volatility for a while, and during this period, do not change your long-term investment strategy.”

Freedman Financial
​Brexit — The Day After

“We will review today's news as a potential buying opportunity if you have cash around. Not for all your cash, but for some of it. Your bond accounts will likely see a positive response, as the demand for high-quality bonds will increase. It too will suggest a "waiting period" for the Fed to announce interest rate hikes. If you're planning to travel to Europe, celebrate; your vacation just got cheaper.

Uncertainty will continue in the weeks to come following yesterday's vote. But it won't lead to cataclysmic movement. If you're invested in a well-structured portfolio and have exposure to an array of asset classes, you have nothing to fear.”

“The market calamity following Brexit may also provide a good opportunity for investors to assess their true risk tolerance. “Can I live with this level of volatility? Do I have the stomach for this?” This type of financial self-assessment can only be done during periods of actual losses. It cannot be simulated in a lab or understood from the textbooks. For those investors unfazed by these market gyrations, what ideas have emerged? Which assets now look cheap and can be purchased “on sale”? Which assets have become more overpriced and can be shunned or trimmed? It is almost a cliché to say that 'volatility presents opportunity', but market dislocation can bring new ideas into sharper focus.”

“This, together with the higher costs of trading, is what led mainstream economists to forecast a 3-7 percentage point negative long-term impact on UK GDP. The pain may not be felt evenly. Many of the large companies in the FTSE 100 Index are global rather than UK businesses — 80 percent of the index’s revenues come from overseas. This should help insulate them from any domestic downturn and potentially deliver a windfall from the weakened pound. Smaller, more domestically focused companies are more vulnerable to a fall in consumer demand and higher import costs. That could be a source of opportunity during a sell-off in UK assets, particularly if the UK makes its new status work over the longer term.

Elsewhere, the economic impact is likely to be felt most keenly in Europe and, in the words of one Federal Reserve Bank president, to have only “moderate direct effects on the U.S. economy in the near term.” Again, we expect an excessive market reaction to be a potential source of opportunity.”