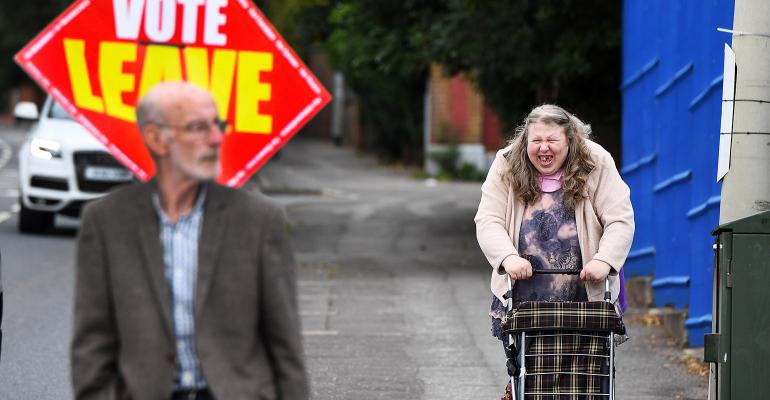 Seven Lessons From the U.K.'s Departure

(Bloomberg View) -- As global financial markets convulse in response to British citizens voting to leave the European Union, the stunning outcome of the U.K.'s referendum provides more questions than answers. As discussed on Monday, the heightened uncertainty, fueled by sudden institutional instability now compounding long-standing economic fragility and financial fluidity, is likely to cause an unprecedented mix of political turmoil, financial volatility and economic damage in the weeks ahead. It also leaves us with seven lessons whose implications extend well beyond Britain.

Socio-political disconnects are everywhere: The "leave" decision is about much more than a narrow majority of citizens refusing to follow their political leaders. It should be seen as a notable rejection of the political and business elites, as well as “expert opinion.” And it also illustrates the regional divides that prevail following a period of low growth, especially growth that has benefited some groups more than others.

Bitter and divisive campaigns are the new normal in national politics: This bruising campaign fueled and was fed by the broader divisions in the country. As such, for way too many, the Brexit referendum decision ended up boiling down to a gross oversimplification -- one that pitted economic wellbeing versus regaining sovereignty over immigration.

Assumptions from history no longer apply to established parties: Just like the U.S. Republican Party, which has taken a step away from free trade, it was the U.K. Conservatives, among the country’s major political parties, that was most deeply divided about the benefits of the world’s largest super-free-trade zone.

Anti-establishment and fringe parties can change politics even when they have no chance of gaining power: Facing the risk of some of his party’s base jumping to the U.K. Independence Party ahead of the last general election, Prime Minister David Cameron felt compelled to promise a referendum in order to secure a re-election of the Conservative Party. Little did he realize the size of the gamble he was taking, one that has split his party. Reacting to Thursday's vote, he has announced he is stepping down.

Fringe politics can feed on themselves, including across borders: Just like the U.K. politics of anger was empowered by the rise of Donald Trump across the Atlantic, the "leave" vote is likely to embolden the anti-establishment movements that have already been gaining traction in much of Europe. And, within the U.K., it is also leading to dissatisfaction in Scotland and Northern Ireland.

Financial markets, and the “wisdom of crowds” that is supposed to underpin them, are not any better at predicting such political outcomes than most people are: In the run-up to Thursday vote, traders got comfortable with the notion that the "remain" camp would prevail. The resulting multi-day rally in Sterling and equities were subsequently more than wiped out, and in a brutal fashion.

Add "Brexit" to a list of unthinkables that have become reality: Strange things happen when advanced economies persist in a new normal of protracted low growth and worsening inequality -- things like negative nominal interest rates and the emergence of Donald Trump as the presumptive Republican nominee. And if the U.K.'s decision to leave the EU does not wake up politicians elsewhere, this list will only get longer in the months to come.