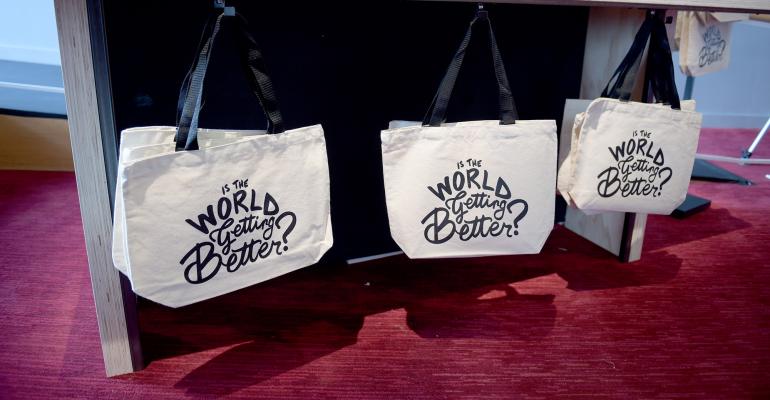 Impact investors have deployed $502 billion but it's only just scratching the surface of the world's problems.

(Bloomberg) -- Climate change, extreme poverty, and all the world’s other big problems will be expensive to solve.

Related: SRI: Where Are the Clients?

The United Nations estimates that its 17 Sustainable Development Goals—a list of initiatives ranging from zero hunger to clean energy—will require annual commitments of private capital from $5 trillion to $7 trillion globally over the next decade. This daunting task has inspired a growing number of investors to put their money to work. Impact investing, which aims to overcome environmental and social challenges while making a financial return, is one of Wall Street’s fastest-growing asset classes. Since the term “impact investing” was coined in 2007, $502 billion has been invested globally in assets deemed to be making a difference, according to a first-of-its-kind attempt to measure them done this April by the Global Impact Investing Network. The investing style has garnered a cultlike following among the wealthy elite, who see it as an alternative to philanthropy and government initiatives. Capitalism, they say, can solve some of these problems faster by harnessing the power of the markets.

Well-intentioned as these investors may be, their efforts have yet to make a significant dent in any major problems. Foundations, families, pension funds, and asset managers, largely from the U.S., have focused on investments that address climate change or improve access to affordable housing, health care, and education. The challenge is amplifying those efforts. The planet, impatiently, awaits the results.

“There have been 10 years of conferences of people debating what ‘impact investing’ is. Meanwhile we’re headed off of a cliff with carbon. This is a full-blown emergency,” says Trevor Neilson, co-founder and chief executive officer of I(x) Investments, a New York- and Los Angeles-based company that says it’s on a mission to bring scale to the idea of “profit with purpose.”

Neilson, who’s worked for Bill Clinton, the Gates Foundation, and most recently J. Todd Morley’s G2 Investment Group, teamed in 2015 with his friend Howard Warren Buffett—Warren Buffett’s grandson—to build what they call “the Berkshire Hathaway of impact investing.” Instead of raising traditional investment funds, their idea is to create a “permanent capital” structure to which investors commit capital indefinitely. Then I(x) will use that capital to provide seed funding to impact companies and help them grow. The company says it’s recruited more than 40 wealthy families and individuals to the cause, including some of the Gettys and Sweden’s Wallenbergs, as well as Airbnb Inc. co-founder Joe Gebbia. “We want to become a conglomerate for good and eventually IPO the whole thing, so a retired teacher in Milwaukee can put this in their portfolio,” Neilson says.

Buffett, who teaches about social-impact investing at Columbia University’s School of International and Public Affairs, developed an “impact rate of return” metric the company uses to measure how its investments are achieving results. Just as value investors look for the return on each dollar invested, this method calculates a unit of social or environmental return for the original investment that’s interchangeable and comparable, whether it’s focused on gender equality or clean energy. Still, almost four years after it was started, his own company remains tiny. When I(x) recently closed its Series A round, it was valued at almost $72 million. The company says that so far it’s backed Canada’s Carbon Engineering Ltd.—a carbon-capture company that says its technology can turn atmospheric carbon dioxide and hydrogen split from water into gasoline; a clean-energy company Neilson co-founded called WasteFuel, which says it’s developed a system to convert city trash to jet fuel; and Rising Realty Partners, a Los Angeles-based commercial real estate company that Neilson also worked with while at G2 Investment.

Impact investing is part of a broader trend toward socially responsible investing, which hit $30.7 trillion in assets this year, according to the Global Sustainable Investment Alliance. In general, socially responsible investing can involve excluding alcohol or fossil fuel companies from portfolios, for example, or incorporating research on environmental, social, and governance risks in investment decisions. Impact investing, sitting on the more intense end of the responsible-investing spectrum, aims to deliver investors a feel-good promise that they can directly and tangibly further their values. It may sound a little too good to be true. Indeed, to make a meaningful impact will require more financial firepower than the world’s most socially concerned billionaires can muster.The World Bank’s International Finance Corp. forecast in April that the size of impact-devoted strategies—including green bonds—could rise to $21 trillion in public markets and $5 trillion in private markets if 10% of the assets held worldwide by institutions and households were devoted to them.

Impact investing has almost exclusively been the domain of small venture capital strategies. That’s left a lot of “gaps in the available capital spectrum,” says Tim Freundlich, CEO of ImpactAssets Inc., a nonprofit financial-services company that channels philanthropic investments into impact strategies. VC backing can get an impact company started, but once it grows to $100 million to $200 million in annual revenue, there aren’t as many investors available to take it to the next level. That’s led several to be acquired by conglomerates—such as Unilever’s purchase of sustainable consumer-products maker Seventh Generation Inc. Only a handful of companies that have started out as impact investments, including electric car maker Tesla Inc. and, more recently, vegan burger company Beyond Meat Inc., have made it to the public markets on their own.

Sensing opportunity, private equity has jumped into the market in recent years. Companies including TPG, KKR, Partners Group, Bain Capital, and Blackstone Group have collectively raised more than $6 billion for impact strategies, targeting next-tier capital that could help impact companies get bigger. Although it remains to be seen if they can bring tiny impact companies past that $100 million level, Freundlich says the entrance of purpose-oriented private equity is welcome. For entrepreneurs “in the impact space, it’s particularly critical to not take money that will derail you,” he says. “You want to find appropriately mission-aligned money.”

The feel-good factor is an important element, but the biggest selling point for any investment will always be the potential for profit. Impact investments are still battling a reputation for achieving lower returns, but investors say they perform better than expected. McKinsey & Co., studying 48 impact deals from 2010 to 2015, found the median internal rate of return was 10%. For the top third, the median return was 34%. Globally, the median net IRR for venture capital funds with vintages from 2010 to 2015 was 15.9% at the end of September 2018, the most recent data from Preqin show.

The goal for impact investors is to find companies “where profit and impact are so intertwined you can’t separate them from one or the other,” says Michael Whelchel, managing partner of Big Path Capital, a boutique impact-investment bank. KKR’s global impact strategy has bet on an energy-efficiency company and a waste recycler. In both cases, the companies’ revenue is directly tied to environmental improvement.

Impact investors have reason to believe the trend is catching on. Beyond Meat’s 163% first-day gain after its May offering made it one of the best-performing IPOs in about 20 years. Freundlich’s clients who invested in the company in 2013 have made a return of more than 20 times their initial investment, he says. “It’s an iconic success point in the market that will create a lot of wealth and liquidity for impact investors,” he says.

Chasan is a sustainable-finance editor at Bloomberg News in New York.

To contact the author of this story: Emily Chasan in New York at [email protected]