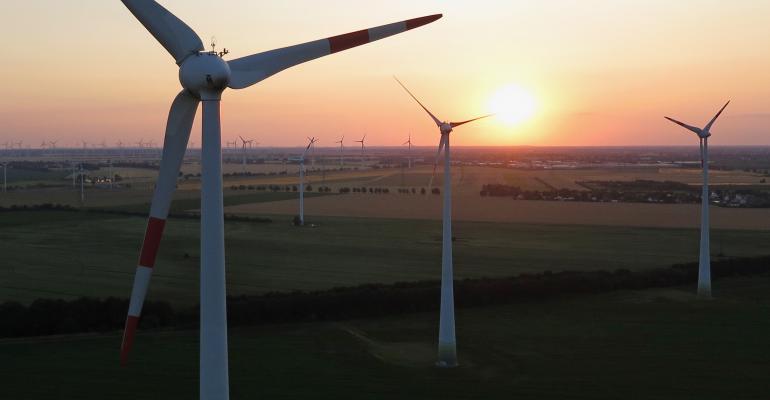 Advisors would be hard pressed to miss the recent explosion in socially responsible investment funds.

These funds seek to build portfolios based on the environmental, social or governance impact of the underlying investments.

Depending on the manager, this may be to screen out certain investments that don't meet a stated code of ethics; for others it is to find a performance edge by taking into account the non-financial factors, like climate change or workplace diversity, that may add to, or detract from, a particular investment's risk profile or future performance. For many managers, these approaches conflate under a "doing well by doing good" mantra - at least in their marketing materials.

U.S. investment managers now have about $6.6 trillion in assets in SRI products, according to Tiburon Strategic Advisors. That's up from $3 trillion in 2010. 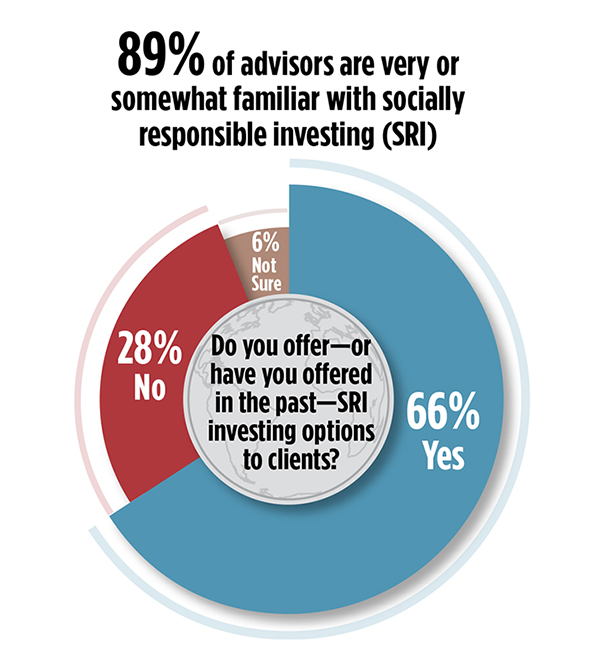 According to a WealthManagement.com survey of 780 advisors across all business channels, while only 35 percent of advisors said they were "very familiar" with SRI funds, 66 percent said they have offered one to clients, mostly due to client requests. Nearly six in 10 advisors expect it to become a bigger part of their practice in the next five years.

But when it comes to evaluating SRI funds, performance still reigns supreme, according to the survey; sixty-seven percent of advisors said they'd be willing to invest more in SRI funds if the case were made that they could deliver superior returns.

Many existing studies have found that there's no performance penalty for investing in SRI funds, at least over the long run. 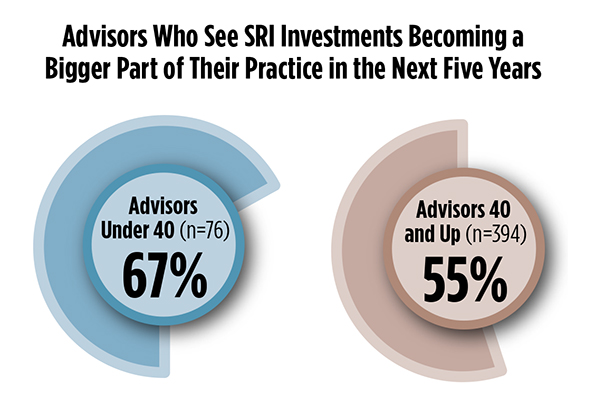 And there is some evidence to suggest investing in companies that incorporate environmental, social and governance factors into their investment mandates could have a positive impact on performance. According to Tiburon, socially responsible investing and impact investing mutual funds met or exceeded median returns of traditional funds 64 percent of the time over the last seven years. A 2015 Oxford University and Arabesque Partners study, which analyzed nearly 200 studies, reports and articles on sustainability, found that 88 percent of reviewed sources shows that solid ESG practices result in better operational performance of firms. Eighty percent of the studies show that good sustainability practices can positively impact a company's stock price.

"The consideration of ESG issues can point analysts to material issues that may not surface in traditional financial," writes Jon Hale, Morningstar's director of manager research, North America.

"We were trained in the investment business that any kind of reduction or constraints on the … opportunity set can cost you in terms of returns," Kern says. "In looking at some of the research that's been done into ESG factors, there have been some compelling arguments made that non-financial ESG factors can have some positive impact on an investment process."

Younger advisors - those under 40 - are slightly less concerned with the performance of these funds and more open to using them than their older counterparts, the WealthManagement.com survey found. Fifty-four percent of the under-40 group said they'd be more willing to invest if the fund appealed to clients' social values. Nearly 63 percent of younger advisors say they're more open to offering SRI alternatives than they were five years ago, compared to 51 percent of older advisors. 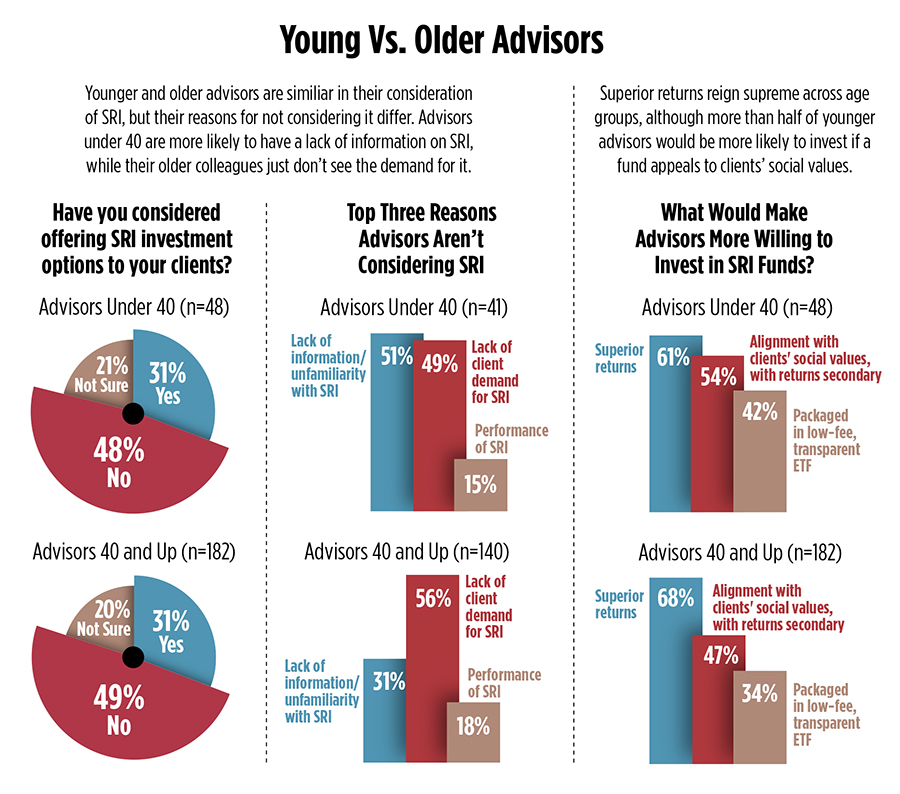 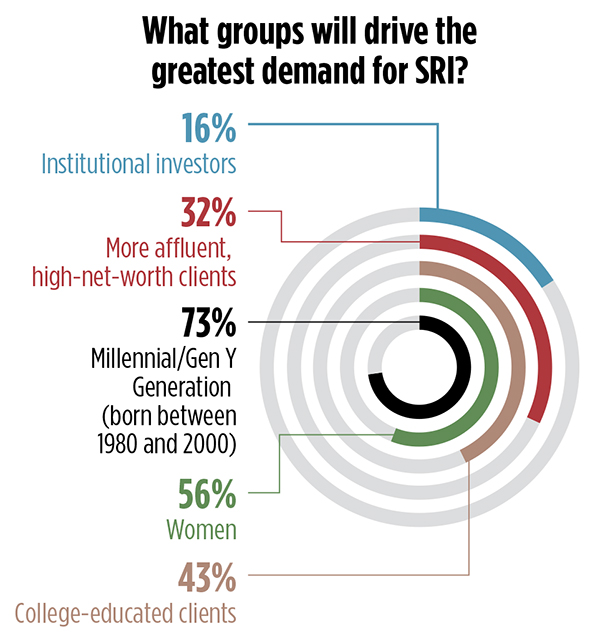 Seventy-three percent of all advisors believe millennials will drive the greatest demand for SRI. Maria Arabatzis, portfolio manager and social investments coordinator at Reynders, McVeigh Capital Management, a Boston-based SRI manager, says the space will continue to grow as wealth transfers to the younger generations.

"Millennials are coming of age and coming into inheriting wealth or becoming earners of wealth in this post-2008 recession time, where they saw the entire financial system collapse for lots of different reasons," she says. "And coming into the job market during that time has created a sense of wanting to understand what's going on behind their accounts and their money, and what these companies are doing, beyond just creating earnings for their shareholders." 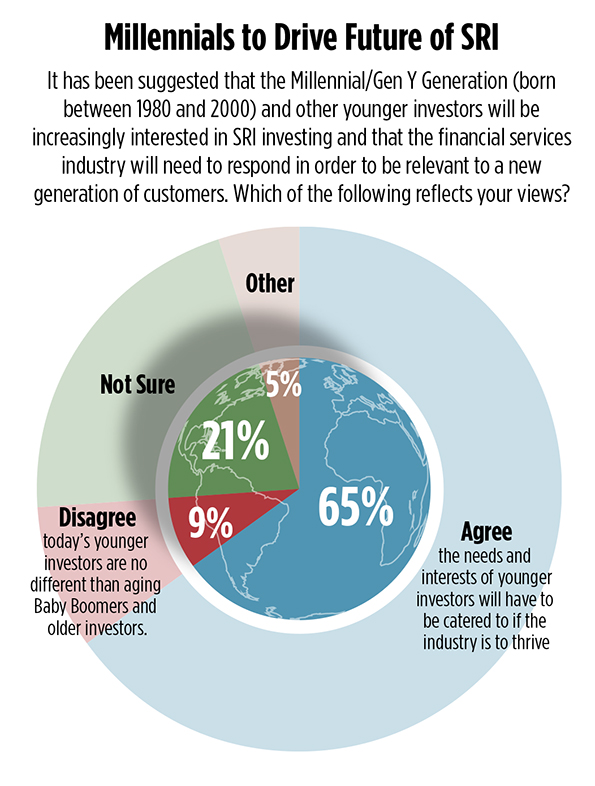 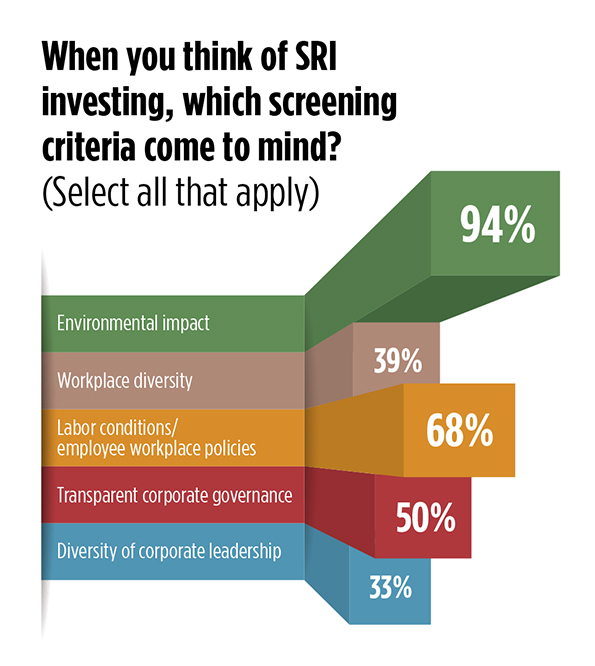