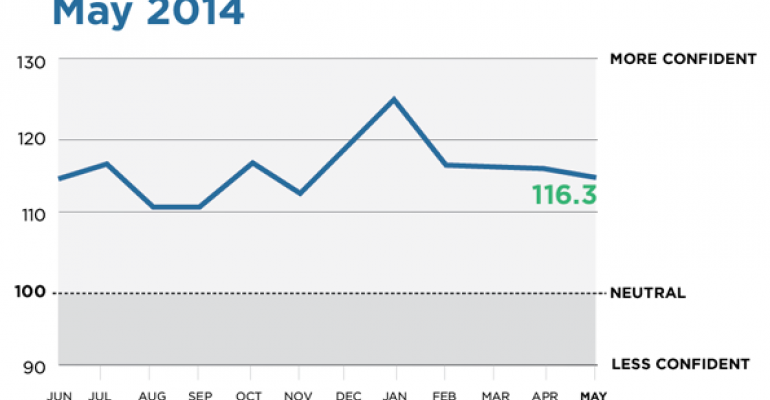 Advisors’ Confidence Falls For Fourth Month in a Row

Advisors' confidence in the economy ticked downward in May, fueled by a waning optimism in future stock market returns

Advisors are losing faith in the near-term future prospects of the stock market, according to the most recent Wealthmanagement.com Advisors Confidence Index, as many think the markets are near a peak and headed for a correction.

The index, derived from a survey of nearly 300 independent investment managers and independent advisor representatives, is a snapshot of advisor sentiment on the economy and stock market. In May, the index fell to 116.29, its lowest level year to date and the fourth month in a row the index has ticked downward. Advisor confidence is down 5.4 percent from the beginning of the year.

The index is an equal weighting of four questions: Optimism over the current state of the economy, the economy in six months, the economy in 12 months, and the near-term direction of the stock market.

Though still signaling overall optimism (a reading over 100 is considered optimistic, below 100 pessimistic) the ACI fell .6 percent in May. But advisor enthusiasm over the stock market took a notable blow in the month, falling 1.5 percent in the month and 7 percent from the beginning of the year, a time when the broader markets, as measured by the S&P 500, has climbed nearly 10 percent from a February nadir. 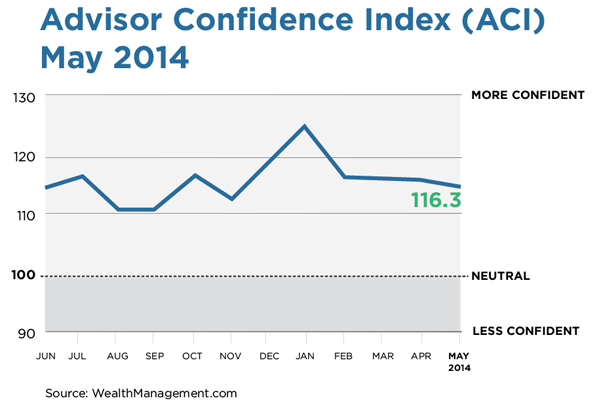 “Prudence is paramount,” says Paul Bennett with United Capital Private Wealth Counseling. “Fund manager sentiment and investor optimism are at very high levels historically and we are over 1,300 days since the last 20 percent correction. These are indicators that a top could be near. Advisers should be proactively making risk-off re-allocations in client portfolios or, at the very least, increasing tactical mandates.”

“After last year's spectacular returns, we believe the market got ahead of itself. We expect the market remain hedge-bound in the near term, to allow the economy to catch up,” says financial advisor Karim Ahamed of HPM Partners.

“I think the market will be flat to up or down 5% into elections and the fourth quarter of 2014,” says Brian Gilmartin with Trinity Asset Management.

“We are overdue for a market pullback, that may wait until the end of fed asset purchases later this year? I believe the long-term picture for the U.S. market & economy continues to improve,” says Nicholas Phelps of Phelps Financial Advisors.

Some advisors see a buying opportunity ahead. “The stock market will have very stiff headwinds the next six months. However you might look to add to stocks if there is a significant correction, above a 25 percent downturn,” says Roger Willroth of Marrs Wealth Management.

“I Believe market is due for a correction. As rates go up, expect weakness in housing market. Jobs market still suffering and expect small businesses to get hit later this year with extremely high health care renewals deferred from 2013,” says Sharon Martin, an advisor with Profit Strategies.

“There isn't enough good news to warrant an optimistic outlook for either the economy or the markets,” says Edward J. Kohlhepp Sr., of Kohlhepp Investment Advisors.  “The Fed continues to wind down the QE program. The unemployment numbers ease to 6.3 percent but the real unemployment problem is much worse, and the crisis in Ukraine is worse, as is Syria, and the U.S. sits on its hands.”

While advisors confidence in the future remained flat in May, more were taking a dimmer view of the current economic situation; when asked their confidence level in the present state of the economy, advisors registered a 1.1 percent drop over the April.

“We thought the advance release of first quarter GDP was rather awful at 0.1 percent annualized,” says Matt Quinn, an advisor with Lee Financial. “While the market powered through the release and attributed the substantial miss as weather related, we really can’t see any way to spin this as anything but negative. While we certainly expect economic data to improve as we move through the year, we will be watching the data a bit more closely and believe the release lends support to our view that investors should consider a more balanced approach to allocating their investment portfolios.”

“First quarter GDP coming in at 0.1 percent was not a fluke. Yes, the weather and major storms impacted economic growth but there still lies an underlying negative current to the economy,” says Scott B. Shubert, Blue Granite Capital.

Many advisors still point to distortions in the economy caused by the Federal Reserve’s quantitative easing program. “While the continuing unemployment and underemployment saga continues to put a drag on the economy, I believe that the recent sluggishness in the housing market will further crimp the economic expansion. i don't believe that we will begin to see more robust growth until the government bond buying program ends,” says Mitchell Freedman of MFAC Financial Advisors.

“The Fed continues to be the rain cloud that seems to follow us around. Time will tell whether or not interest rates need to rise faster than they are forecasting. With the growth outlook shaping up, earlier rate changes could serve as a surprise to markets,” says Chad Carlson of Balasa Dinverno Foltz.

“Defensive investments have come into favor. It is no time to be a hero. Save you powder for the fall when seasonal patterns will take the market much higher into 2015. For now, we are mostly done the earnings season with okay earnings (from reduced levels) while revenue gains are not so good. Investors will head to their vacation destination and relook at earnings again in July,” says Kenny Landgraf of Kenjol Capital Management