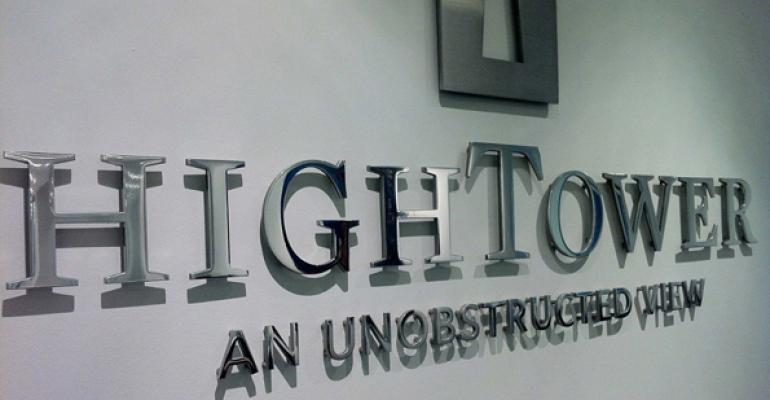 Part of that transformation was a shift from the partnership model to an ownership model through cash and equity deals with existing advisors. When Thomas H. Lee closed the deal in early 2018, the firm owned 23% of the revenue of HighTower, leaving 77% of revenue vulnerable to attrition, said Oros. “THL bought in knowing there was work to be done.”

The firm went back and transacted with nearly every one of the original teams that came on board, prioritized by those whose equity had already vested. Now HighTower owns 91% of the revenue of its advisory businesses, and the firm continues to close deals with internal advisors every month.

“A very small percentage of our revenue is left unprotected at this point, and will likely transact here over time,” Oros said.

Part of the problem, Oros said, was that HighTower acted as a startup a little too long, often a defense for not doing the tough things that an organization needs to do. (The firm is more than 10 years old.) Many of the early deals with advisors were seven-year deals, and many expected some kind of liquidity event with that time period—whether it was an initial public offering or something else.

“It’s fair to say some of them decided, ‘You know what? I don’t know if there ever will be an event,’” Oros said. “And there are plenty of options, as we all know, available to people, including starting your own RIA. Some chose that door. Thankfully, most didn’t, and most were willing to wait and give the Thomas H. Lee ownership structure a chance.”

Well over 40% of the firm is owned by advisors and management, and Oros expects that number to grow.

“What it did when we went out and solidified these firms for the long term, meaning some form of ownership, etc., is it put us all on the same side,” said Abby Salameh, HighTower’s chief marketing officer. “So now it’s a different type of community that’s all working together and that’s all really aligned in wanting to see this business succeed in ways that it may not have been before.”

To get to that place, Oros “simplified the playbook.” The business was originally built in a capital-intensive way, recruiting big wirehouse teams that required a big check.

“It took a lot of capital to do it, and sometimes capital’s plentiful; sometimes it’s not,” Oros said. “You have periods where access to capital was tight. What happens? Now I’ll launch a platform business, because platform is capital-lite. I don’t have to write a check.”

The platform business now accounts for just 6% of HighTower’s revenue, and it’s no longer actively marketing that business.

Oros said he’s focused on building the firm the right way, with a strategy shift toward acquiring registered investment advisor firms. This year, the firm has taken significant equity stakes in some large RIAs, including Green Square Wealth Management in Memphis, Tenn.; LourdMurray in Los Angeles; and Lexington Wealth Management in Lexington, Mass.

But the firm is also highly focused on organic growth and has been building out its infrastructure to help its existing advisors grow. For instance, the firm implemented an Oracle Enterprise Resource Planning solution, which will produce profit and loss statements for its advisory businesses as well as HighTower’s own financial statements in a timely way. They’ve also invested a lot into human resources, including creating job descriptions, pay bands and formal bonus programs. The firm takes on all the HR functions for the advisory businesses it acquires.

The firm also has an outsourced CIO (OCIO) option, where it currently manages over $500 million on behalf of its advisors.

It also has a trust company, to help with corporate trustee services, personal trustee and family office services.

Oros brought on Salameh from Private Advisor Group in May to lead the firm’s marketing efforts, and she has been building an outsourced CMO model. Salameh hired Meghan McCartan, former CMO of FiComm Partners, who will serve as outsourced CMO for a select group of advisors. McCartan will build a comprehensive strategic plan for advisors’ marketing and a tactical plan to help drive growth. She’ll take that plan through the execution phase, ensuring accountability and analyzing metrics and key performance indicators.

The firm is currently growing at an annualized rate of 9.1%, compared with 8% in 2018, and that is an absolute net number—backing out market appreciation.

“We’re proud of the number, although not satisfied with it,” Oros said. The firm’s ambition is to grow at 12% to 15% organically, he said.

“If we hit numbers like that, if we never did another deal, we have a great business,” he added.