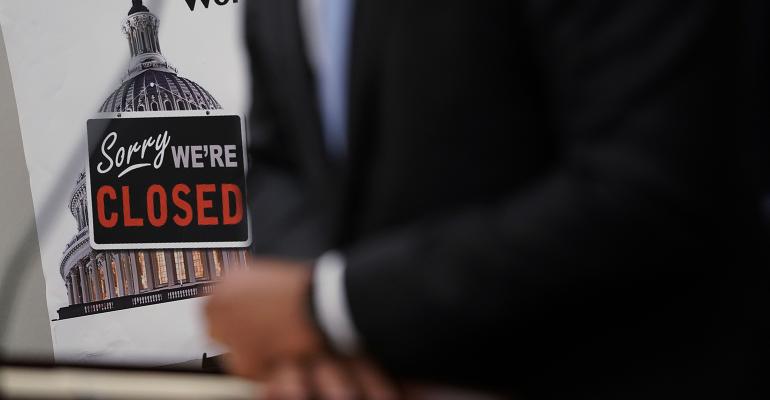 Government Shutdown Delays the Move to Independence for Some Advisors

The government reopening is just a temporary reprieve, and advisors looking to go independent may want to consider other options beyond SEC registration, in case another shutdown occurs.

While President Trump just announced plans to reopen the government today, it’s a temporary reprieve, and it very well could close again in a few weeks. But the effects of the five-week partial shutdown have not been lost on advisors, especially those who were forced to put their plans on hold to launch their own registered investment advisory firms.

Since late December, the Securities and Exchange Commission has operated with a skeleton staff of just 300, leaving the unit that approves registrations for new advisory firms closed for business. There’s no telling how long it will take the staff to get through the backlog of registrations.

Patrick Burns Jr., the managing attorney with The Law Offices of Patrick J. Burns, Jr. in Beverly Hills, Calif., said he was working with one advisor who was scheduled to launch his new firm Jan. 2 but was stuck in limbo with no activity at the SEC.

“It’s definitely a concern,” he said earlier this week. “We had one guy that was scheduled to go live Jan. 2, and he’s just in limbo right now. What we’re expecting is that when the SEC gets funded and the registration unit returns back to work, they’ll backdate the approval date to Jan. 2.”

Burns had a couple clients who were stuck at their firms due to the shutdown; they were still under employment contracts, with no ability to move accounts.

“If they resigned, they’d be out on the street without any place to go and no ability to move those accounts at the present time,” he said.

The SEC has 45 days to approve or deny a registration application, but there’s ambiguity as to whether that period tolls even when the agency is closed. Burns expects the agency to honor the original approval dates.

To make matters worse, some SEC employees were looking for work elsewhere to pay their bills; Burns was fielding calls from folks seeking employment at his firm. That’s likely to leave the agency even more short-staffed.

“[The SEC is] going to have a brain drain on the horizon,” Burns said.

This may not be the end of the shutdown. Trump has said if he doesn’t get a deal to fund his border wall by Feb. 15, he may close the government again.

If we do face another shutdown, there are other options—besides SEC registration—for advisors looking to jump to independence.

Brian Hamburger, founder of The Hamburger Law Firm and MarketCounsel, a regulatory and compliance consulting firm, said the shutdown caused his firm to delay target dates for firm launches. In other cases, he was working on a Plan B with advisors.

The SEC has an exemption that allows a new firm to register with the agency, even if it doesn't have the requisite $100 million in assets, as long as it reasonably expects to have those assets within 120 days of registering.

But it doesn’t mean firms have to jump to the SEC at the offset, Hamburger said; that’s just an option for ease and efficiency. To get up and running, these firms can register with the states now and file with the SEC once they pass the asset threshold. After all, firms that are just starting out and transitioning client accounts have no assets.

“We just deal with the inefficiencies that come along with that, but at least we can get their doors open and get them up and running,” he said.

Another option is to pursue some type of interim strategy, such as tucking into an existing independent firm. These types of unexpected situations are what motivated Hamburger to work with Private Advisor Group, an office of supervisory jurisdiction and RIA, to develop its new affiliation model. Advisors join as 1099 employees. The service is designed to be a temporary one, should the advisor want to use PAG for a jumping-off point, or the advisor might choose to continue its affiliation with PAG under one of the OSJ's other business models. An advisor’s clients sign negative consent forms, meant to make it easy to move should they establish their own RIA in the future.

“We said, ‘If something like this unexpected happens, we need a lifeboat,’” Hamburger said. “We need a place to get people into now that doesn’t bind their hands and allows them to then continue their movement towards full independence, if indeed that’s what they choose to do. The government shutdown is one of the items on that use-case.”

Louis Diamond, executive vice president of recruiting firm Diamond Consultants, said most of the folks they work with who are launching their own RIAs aren’t doing it because they have a gun to their head. But joining an existing ADV as an independent contractor can be a good option for someone who’s been terminated or is intent on moving quicker.

“If they're joining an established RIA, then they don't have to worry about SEC registrations,” he said. “They can get up and running within a matter of days or weeks as opposed to months, doing it this way.”