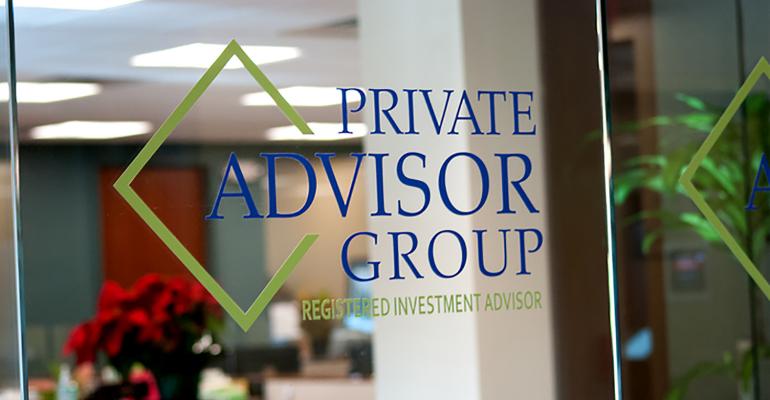 While the model may be a huge departure for LPL and set PAG apart from other OSJs, the changes bring the firm up to par with what some other RIAs are already doing for wirehouse brokers looking to build their own business.

Private Advisor Group, a hybrid registered investment advisory and office of supervisory jurisdiction of LPL Financial, recently introduced a new affiliation model aimed at luring financial advisors out of the wirehouses and making it easier for them to move to true independence, with an assist along the way powered by PAG. While the model may be a departure for LPL and sets the firm apart from other OSJs in its network, observers say the changes bring it up to par with what some others are already doing in the RIA space.

“Private Advisor Group—they’re going to have to compete with the Summit Trails, the Mariner Wealths, doing a central play, the Trues (True Private Wealth Advisors),” said Shirl Penney, CEO of Dynasty Financial Partners. “I mean the space is becoming more and more competitive with these advisor-led brands that are starting to build up in various parts of the country.”

Under PAG’s new model, advisors join the firm’s registered investment advisor, and PAG acts as the OSJ, providing compliance and supervision for the advisor. For a lower payout, advisors get a curated tech stack, with Orion Advisor Services as the chassis, that is open architecture. Other tech providers on the platform include eMoney, Riskalyze, Redtail and Morningstar. PAG has partnered with MarketCounsel to provide legal services to advisors who join the model.

Advisors are free to choose the firm they want to custody with—Fidelity, Schwab, TD Ameritrade Institutional, Pershing or LPL. LPL has agreed to waive its 5 basis point fee for custodying assets off platform. PAG will even help advisors find office space and negotiate leasing contracts on their behalf.

The idea is to provide a “plug and play” model to wirehouse advisors who want to go independent but need a kind of “halfway house" between captured employment and true independence. The service is designed to be a temporary one, should the advisor want to use PAG for a jumping-off point, or the advisor might choose to continue their affiliation with PAG under one of the OSJ's other business models. An advisor’s clients sign negative consent forms, meant to make it easy for clients to move with the advisor should the advisor establish their own RIA in the future.

“We are really friendly about an advisor that's raising their hand saying, ‘Hey, I want to come to independence,’ but at some point maybe six months, maybe 12 months, maybe longer, they may want to launch their own RIA,” said Private Advisor Group co-founder John Hyland.

That takes away the need to repaper from an Automated Customer Account Transfer (ACAT) perspective, but Dynasty’s Penney argues that the advisor will still have to repaper client accounts in setting up their own ADV. And even if the advisor stays with the same custodian, they’ll have to sign new paperwork on advisory agreements for the new ADV.

“So there will be some unplugging, and inertia is real in our business,” he said. “And advisors don't always understand the amount of work to unplug from that type of chassis.”

Louis Diamond, executive vice president of recruiting firm Diamond Consultants, says the new model is unique under LPL, and it positions the firm as an RIA-friendly broker/dealer, similar to Purshe Kaplan Sterling or Triad, which don’t charge a fee for supervising the RIA. The move brings PAG up to speed with the rest of the RIA industry, he said.

“It’s pretty much where the rest of the industry is, in terms of you can have your pick of custodian, you can use whatever technologies you want, we're not going to charge you for not using our own proprietary custody solution,” Diamond said. “There are a lot of advisors who would like LPL because it is the largest broker/dealer, but maybe they were scared off or dissuaded from using it because they really did want to use a Schwab or a Fidelity or a TD. Now they can kind of get the best of both worlds, where they can join a turnkey RIA platform, they can choose their custodian and get to work with the largest broker/dealer in the industry.”

Diamond says this could be a good option for wirehouse advisors that don’t meet the minimum asset level at firms like Dynasty or HighTower.

“They get better pricing with various tech providers or custodians, so it's more turnkey than doing it on their own,” Diamond said. “And for someone who is below the minimums of a HighTower and a Dynasty, it gives them a lot of support, where, maybe, it wasn't as robust as before.”

It remains to be seen whether teams with $500 to $800 million in assets would go into these type of models built for smaller advisors, Penney said.

“At that size, obviously they could very easily do their own thing. Or get a supported independent model with a platform provider like us.”

Many independent broker/dealers, like Commonwealth, are also making it easier for their advisors to drop their FINRA licenses and either go "fee-only" under the IBD's RIA or start their own.

And, like the PAG offering, Raymond James has had a long-standing policy that the advisor owns the client, so they are free to leave and take clients with them, the firm said.

In fact, most RIAs are pretty accommodating when an advisor decides to leave, Penney said. Dynasty's contract includes an “evergreen provision” that allows advisors to opt out of the platform. That kicks in after four years with the firm, and the advisor must give one year’s notice.

“We don't control their business; we don't own their business. So if we don't deliver, just like the custodian or anyone else, then they can go full independent,” Penney said.

Still, observers said the development from an LPL firm is an innovative one that should ease the pathway for some captured advisors looking to build their own business. “The [PAG] affiliation model is a fantastic ‘gateway drug’ to independence, as it offers a plug-and-play solution that is several deviations from the employee model they are running from,” said Matt Sonnen, founder of PFI Advisors. “Many advisors, however, will learn the ins and outs of running a business and will eventually ask to take the training wheels off.”