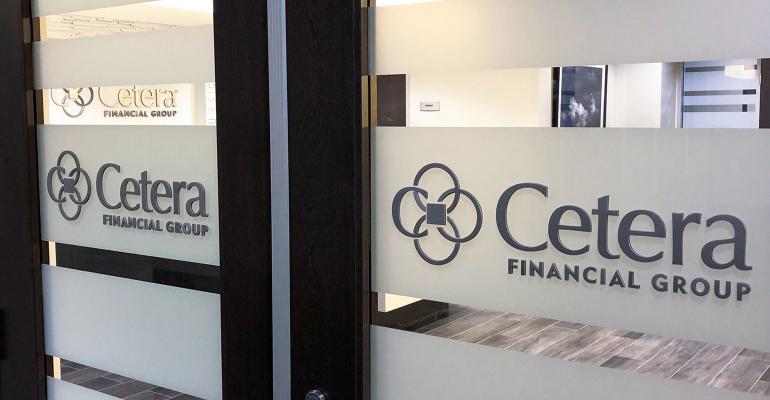 Talks between the private equity owners of Cetera and Advisor Group reportedly broke down last week, as some advisors say Cetera is struggling to meet their expectations.

Private equity firm Genstar completed its reported $1.7 billion acquisition of independent broker/dealer network Cetera Financial in October of last year. Less than a year later, Cetera is looking to buy another broker/dealer, a move some sources say is needed to make good on the promises its current owner saw in the firm.

On top of the list of prospective targets was Lightyear Capital’s Advisor Group, but negotiations with that firm reportedly broker down last week. Genstar looked at acquiring Kestra as well, according to a source familiar with the firm. While Cetera executives would not speculate about any specific talks with Advisor Group, CEO Robert “RJ” Moore said in an interview with WealthManagement.com that the firm is open to a deal, anything from buying smaller firms to making “transformative” acquisitions. An investment banking source said a deal with Advisor Group would have saved the firms some $80 to $120 million in costs, a significant amount given the firm is saddled with servicing some $1 billion in non-investment grade debt.

Meanwhile, several advisors who spoke to WealthManagement.com, many on the condition of anonymity, say they too are frustrated that their expectations of Cetera in the wake of the Genstar acquisition are not being met.

They say Cetera has been slow to roll out several technology initiatives promised in recent years. These advisors also say they are frustrated that after sticking with the firm through its troubled recent history under previous owner Nicholas Schorsch, which ended in bankruptcy, they did not share in the proceeds from the Genstar acquisition. Though the new owners do allow advisors to buy equity, the retention bonuses or equity grants that many expected never came to pass. There have been some significant practices decamping to rival firms over the past two quarters of 2018.

“I called right to the top,” said E. Martin von Känel, founding member of $120 million AUM Patriot Wealth Management in Torrance, Calif., who left for LPL in October. “The comment to me was, ‘Be thankful, Martin, you’re not having to repaper.’"

He said he was particularly upset at the fact that he believed top executives at Cetera received a significant windfall from the Genstar acquisition that could have trickled down to advisors. “I said, ‘OK, yet you’re going to walk away with maybe $225 million in your pocket?’ That led me to say, ‘You know what? Once again, I understand where I sit with you. I’m a number, always will be. All the hard work I’ve done over these years to ensure the success of this company means nothing.’”

Sources say Moore received 10 to 12 percent of equity in the company as a result of the sale, which was distributed to senior executives. But Moore, the largest individual shareholder in Cetera, told WealthManagement.com he paid for his equity stake, as did the other senior leaders. The firm does have an options program, where executives can earn additional equity if certain performance hurdles are met.

Retention bonuses, however, don’t align interests between the advisor and the work that Cetera does, Moore said. “A retention bonus is just money out the door.”

In October, the firm announced a new equity value participation program, open to all advisors who qualify. It’s structured as a Reg D offering, and there’s an equity kicker built into it that enhances their return.

One former Cetera advisor, who declined to be named, said she wasn’t interested in an equity deal in part because the acquisition was financed by issuing some $1 billion in junk bonds, a debt the company carries.

“I kind of felt if they got this junk bond status rating on the debt, that the parent company was going to be more worried about paying down that debt. If we’re paying down all this debt, where are all the resources going to come to pay for the technology and everything we’ve been promised for years?”

Cetera was one of several b/ds cobbled together via a quick succession of acquisitions in 2014 by real estate investment manager Nicholas Schorsch. The firm filed for bankruptcy in January 2016, and Cetera emerged from it in the spring of that year.

“A lot of people who worked really hard to get the company, pulled it together, and get it through the bankruptcy and really saved the company, didn't get a nickel,” said an investment banking source who did not want to be named. “No one went to bat for the advisors during the process.”

In late 2016, Cetera said that it was partnering with PIEtech to bring client-facing myMoneyGuide and advisor planning software MoneyGuidePro, to its advisors. The firm also said it would be rolling out a robo investing platform to advisors. “AdviceWorks,” the new portal for advisors and clients, will replace the firm’s “SmartWorks” platform, said Moore. It has started to roll out.

He admitted to delays in the rollout of the robo because the integrations and customization requirements are taking more time than anticipated, he said. Moore said the firm will announce a partnership with a robo vendor in the next week.

“There’s that trade-off between functionality and ease of use relative to speed-to-market,” Moore said. “We really have strived, and it’s taken us time, to have it be integrated, have a lot more feature sets, particularly for our bank and credit union programs, so that we get a lot more adoption.”

Decipher, its highly anticipated facial recognition software that was demoed at the recent T3 conference, was supposed to roll out across its advisor force at the end of 2017. Instead, it’s still in the pilot phase, with less than 100 advisors using it.

One advisor, no longer with Cetera, who was part of the pilot, said the facial recognition tool was not particularly useful for her.

“I would’ve like to have seen the focus on the basic technology that we were promised rather than going in this vein of facial recognition. I can see you’re trying to differentiate yourself between other companies out there by bringing this to the table, but in my opinion, you need to kind of take the steps before you started running,” she said.

An account aggregation tool was also delayed, she said, although it’s now available to advisors.

“They’d promise and promise and then miss the target date and miss the target date,” she said. The firm would say, “‘Don’t worry; we’re going to deliver on the next date.’ And then the next thing you knew they had a new company that they were partnering with as a vendor, and we were like, ‘Well what happened to the other vendor?’ To me, it seemed like they started back at ground zero again.”

“When we went to the annual meeting, they were talking about all this technology that they were going to be doing. We didn’t see that happen,” said Kathleen Hansen, founder The Financial Planning Department, which left Cetera for LPL in September.

But the main reasons Hansen’s team left was the culture of the back-office staff, which she said was unhelpful, as well as the uncertainty around the changing ownership. “All the uncertainty, to me, was just not someplace I wanted to be,” she said.

“When [Genstar] came in, they realized that there had actually been a revolving door of senior technology people who had essentially left behind a pipeline of promised technology bells and whistles that either were never going to materialize, or they would materialize if and only if there was significant added capital put into the business right away to give the funding that was actually needed to turn these very extravagant promises into reality,” said someone familiar with the acquisition.

Another dynamic leading the firm to consider acquiring another firm has been declining advisor retention, currently at 94 percent. Moore told WealthManagement.com that the firm had flat growth last year, but so far this year, the firm is growing on a net basis.

While the firm’s focus on banks and credit unions helped it recruit more than 800 advisors last year, many of those are smaller producers in the banking and credit union channels, a strategic focus of Cetera. Serving hundreds of smaller producers can be costly, said a source close to the firm. That may be one reason Cetera is eager to buy its way to higher revenue and profit.

“For Cetera, if they're proactively putting out an announcement of low margin, commission heavy, low producing banks and credit unions…it's definitely a sign of how eager they are to try to change the narrative with their owners right now,” said a source close to the firm.