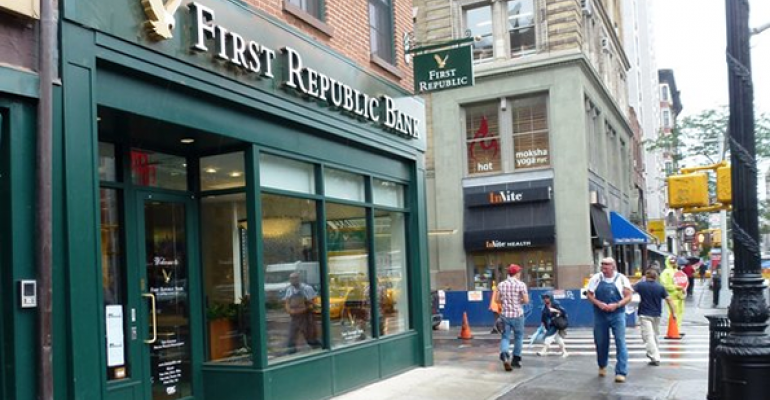 The former Luminous team recently broke away from First Republic, proof that in the world of RIA M&A, the advisor, not their acquirer, holds the cards and there’s often a culture clash with banks.

When Luminous Capital sold itself to First Republic Bank in November 2012 for a staggering $120 million, it set the stage for other registered investment advisors to consider bank acquirers, showing you could sell to a bank and still grow and retain your firm’s identity. It also put First Republic on the map as far as its wealth management business, setting it up to buy other RIAs, such as Constellation Wealth Advisors, subsequently.

But this week the bank arguably learned a valuable lesson: In wealth management, the earnings potential is unlimited, and advisors, not their acquirers, are the ones who hold the cards—and the client relationship. The original Luminous team walked out the door after just a handful of years at the bank, taking a reported $17 billion with them, about 12% of First Republic’s wealth management assets.

The move calls into question a key model that many of these bank entrants to the wealth management space have relied on—buying up RIAs, with the expectation that they’re going to be super profitable long term and cross-sell banking products. Industry observers say the departure was a massive failure of that model, and that other bank buyers should beware. It’s also just another example of a failed bank/RIA marriage, where cultures often clash.

“It’s a warning signal for banks or other potential private equity acquirers or whoever else that the relationship is between the client and the advisor, and if that isn’t reflected in the equity ownership of the company, eventually there’s going to be a falling-out,” said Jonathan Rogers, co-managing partner at Forum Financial Management, an RIA in Lombard, Ill. with $3.8 billion in assets managed and serviced. “The person who owns that relationship and is at the center of that relationship holds the cards in these deals. It’s not who necessarily owns the equity on paper.”

“[The Luminous team] just parked the firm at the First Republic brand for a while to collect their $100 million, they passed 'Go' and then off they went,” said Tim Welsh, president, CEO and founder of Nexus Strategy in Larkspur, Calif. “It makes them a much better negotiator than First Republic Bank.”

When the Luminous team joined First Republic, the deal was likely structured with an up-front payment and then earnouts on the back end, and the last earnout was achieved about two years ago, according to Mindy Diamond, president and CEO of Diamond Consultants in Morristown, N.J. And since First Republic is under the broker protocol, the advisors were free to solicit their clients. The protocol trumps any nonsolicit provisions or employment agreements they may have had.

“They had earned all of the bonuses available to them by that point, so they didn't leave any chips on the table and they had no further employment obligation, or legal obligation, to First Republic as long as they didn't violate protocol,” Diamond said.

“There’s no way [First Republic] should’ve let that happen,” Welsh said. “They bought them; they should own them. But when you’re buying an RIA firm, you’re buying a lot of intangibles, such as talent, and talent has a tendency to flee when times are bad.”

But Diamond doesn’t believe the departure was an indictment of First Republic, but rather, the team’s desire to be independent business owners again.

“There's no question that the take-home economy is better as an independent,” she said. “The ability to own a business, build equity and then monetize it yet again at cap gains is theirs for the taking by being independent.”

In many ways, the team didn’t assimilate or integrate into First Republic; they kept their own technology tools, custodians and even human resources roles, a sign that they never wanted to be employees.

A number of smaller banks, driven by thin margins caused by the low-interest-rate environment, have pushed into the wealth management space over the past decade. But some say the marriage between RIAs and banks hasn’t worked out in the past, especially when integration is involved; the cultures are just too different.

Several RIAs that sold to banks have since bought their firms back. Sullivan Bruyette Speros & Blayney, for example, repurchased their RIA from Bank of Montreal a few years ago. In 2009, Boston Private sold its 76% stake in Palo Alto, Calif.-based Sand Hill Global Advisors to the management team (with the help of Fiduciary Network).

“All these high-profile bank deals have not worked out because the synergies that look great on paper and PowerPoint in reality don’t occur across business lines,” Welsh said. “None of those synergies ever really come to fruition despite the fact that it should make sense. You’ve got rich people over here. You got rich people over here. Why can’t we just convert them? It’s more of a function of culture and lack of cooperation across the larger teams.”

RIAs tend to thrive in a more entrepreneurial, independent environment, which is not consistent with the closed, employee-driven, conservative and compliant bank culture, he said.

Rogers’ firm, Forum, was in light discussions with a bank interested in acquiring them, but he and his team determined it was not a good fit.

“I do think there’s a difference between bank cultures, who tend to be risk-averse, and the RIA cultures, who are in the business of talking about risk with their clients on a daily basis,” he said.

David DeVoe, managing director and founder of DeVoe & Company, said one mistake banks make when acquiring RIAs is that they expect the advisors to cross-sell their products. The deals are often structured with cross-selling in mind, with suboptimal outcomes.

“Cross-selling is hard, and cross-selling can be done right or in many cases it can create friction or challenges, either with the clients or the organization,” DeVoe said. “And many times if a valuation is predicated on the economics coming from cross-selling, and cross-selling doesn't come to fruition, then you have a new layer of dissidence.”

But DeVoe said he’s working with a new crop of regional banks that, he believes, are structuring more sustainable deals in the space. These banks do not have the economics of cross-selling as part of the rationalization for the transaction, nor is it embedded in the deal structure. He believes that will make the deals more likely to succeed.

Still, Welsh argued, the risk in these deals rests upon the bank to make the integration work and advisors to want to stick around. And now it’s easier to go off and create your own organization.

“With technology and their hungry spirit, you can really drive business. You don’t need a big brand to do it,” Welsh said.