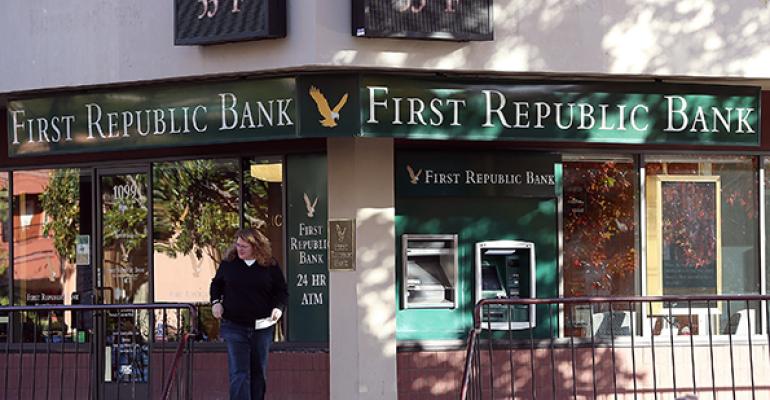 First Republic Bank announced plans Wednesday to buy Constellation Wealth Advisors, an independent multi-family office firm with $6.1 billion in assets, for $115 million in cash. This is First Republic’s first major acquisition in the wealth management space since the firm scooped up Luminous Capital for $125 million in November 2012.

“It’s really becoming the year of the mega deals,” said David DeVoe, managing partner of DeVoe & Company. “This is the seventh deal year-to-date that we’ve had that’s been over $5 billion.”

That compares to a total of two or three RIA deals over $5 billion in each of the last couple years, DeVoe said.

Advisors and industry bigwigs alike were stunned when First Republic bought Luminous, which at the time had $5.5 billion in assets, as the price seemed to set a high bar for valuations of wealth management firms and started a rush of speculation that the headline-grabbing transaction would spur similar deals.

Constellation, which specializes in high-net-worth individuals, families and family foundations, also has a broker/dealer. The firm includes six partners, who have signed long-term employment contracts with First Republic. The firm is run by co-CEOs Paul Tramontano and Jon Goldstein, and has offices in New York and Menlo Park, Calif. Prior to forming the company in 2007, the managing partners ran two of the largest teams at Citigroup’s family office division.

DeVoe said the news does not bode well for the wirehouse channel.

“It’s another example of advisors that have left their organizations and less than 10 years later had a liquidity event that could be in the $100 million range,” DeVoe said. “This doesn’t help as they’re trying to retain their advisors.”

Baker Street Advisors, a San Francisco-based RIA firm with about $6 billion, is another recent example; the firm sold a majority interest to AMG Wealth Partners in January. The partners were previously with Goldman Sachs.

“Banks have historically not done well with wealth management firms—the cross selling never really happened,” said Tim Welsh, president and CEO of Larkspur, Calif.-based Nexus Strategy. “But I think they just can’t help themselves. They’re flush with capital, and they see an opportunity to dive back in. First Republic may be the exception because they’ve done this before, and they have existing wealth management firms.”

Before the financial crisis, banks were the primary acquisition engine, making up more than 60 percent of the deals prior to 2008, DeVoe said. But that dropped dramatically in 2008 due to the market decline and the challenges the banks had at that time.

But that activity is picking up. A recent report by DeVoe & Company found that banks were involved in about 6 percent of first quarter deals, up from 2 percent of the deals completed throughout 2014. First Republic has completed about three to four transactions in the space—big and small—over the last two to three years, DeVoe said.

“Out of all the banks, they’ve been the most active,” he said.

First Republic expects the transaction to close in the third quarter.

This story was updated at 3:38 p.m. eastern time to include industry comments.