Finding the best tools and resources to run a practice effectively is why independent advisors choose one broker/dealer over another. There are lots of quantifiable reasons an advisor sticks with a firm, but like any good relationship, there is also an intangible quality to what makes it work.

And indeed, most relationships between independent brokers and their firms are working well. In our fourth Independent Broker/Dealer Report Card, a survey that lets advisors from independent brokerages rate their employers on a number of factors, advisors reported they were very satisfied with their firms overall. The average approval rating was 9.0 on a scale of one (lowest) to 10 (highest). “Any broker/dealer who is scoring above a 9.0 is doing an outstanding job,” says Philip Palaveev, founder of The Ensemble Practice. “If someone was under an 8.0, that’s cause for concern.”

Even so, patterns emerge when looking at the aggregate data. The survey shows that among all the factors that may lead to advisor satisfaction, or dissatisfaction, with their firm, size is among the most important. Overall, advisors at small to mid-sized firms were more satisfied than those working with larger firms.

The sweet spot seems to fall among firms with 100 to 500 brokers—such as Summit Financial Services and VSR Financial Services. Firms in this category earned an average satisfaction rating of 9.2, according to the survey results. (See chart.)

It’s not a huge surprise. “It’s easier for small to medium firms to have strong relationships with their reps,” says Jonathan Henschen, president of recruiting firm Henschen & Associates.

Yet this is an industry that benefits from economies of scale—if a firm is too small, it struggles economically. Last year, 250 broker/dealers, the vast majority with less than 100 advisors, closed up shop, according to David Alsup, founder of Fishbowl Strategies.

Research by Tiburon Strategic Advisors estimates the average IBD has a mere 2 percent profit margin. The struggles of those smaller firms fueled the recent surge in mergers, Henschen says.

Summit Financial, which received the highest overall score of 9.9 and has $9 billion in assets, prides itself on its small scale. The firm has 50-inch plasma screen TVs scattered throughout its Boca Raton, Fla. headquarters that flash streaming photos of their 320 advisors on vacation with their families and posing with their pets. “It’s really like a family,” says Summit’s president, Marshall Leeds. “We put them on these monitors because we only get to see the advisors several times a year and our operations people want to see them more than that.”

Palaveev cautions that smaller firms’ overall scores may not tell the whole story for every advisor. “Some advisors will find they need a larger platform and many offices.” 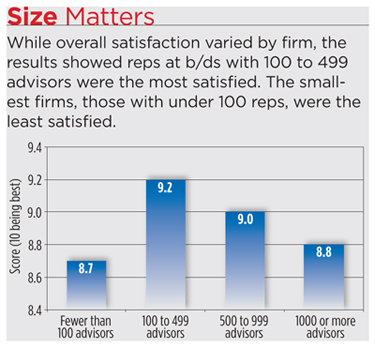 Undoubtedly true, yet the lowest scoring firms on our report card were also among those with over 1,000 advisors: ING Financial Partners (7.2), LPL Financial  (7.8), Signator (7.9) and Wells Fargo Advisors Financial Network (8.1). “The one unifying factor with LPL, Wells Fargo and Signator is there could be some feeling by their advisors that they are not the focus,” says Scott Smith, director at Cerulli Associates.

For example, with Wells Fargo’s FiNet, advisors believe the public, the industry and even company management generally thinks of the company as a bank, or a wirehouse, first. “FiNet doesn’t come up as their ‘big thing,’” Smith says. Being a small cog in a big machine doesn’t sit as well as being with a firm focused specifically on indie advisors, he says. “Advisors let their emotions kind of rule their responses in all of these kinds of things,” Smith says.

ING Financial Partners, on the other hand, is in the midst of a company-wide reorganization and rebranding to Voya Financial. Last May, the unit’s Dutch parent, ING Group, took the brokerage unit public (it currently trades under the ticker symbol VOYA on the New York Stock Exchange) as part of a program to divest some of its global businesses. On April 7, ING U.S.’s publicly listed holding company will officially switch over to the Voya Financial name, with other business set to make the transformation over the next six months.

“There’s some resentment there,” Smith says. “Right now the company is in a restructuring phase; it’s chaos at this point. I can see that floating into the overall reviews of the firm.” Overall, the firm ranked at the very bottom, with a 7.2 overall score.

Advisor retention is also a good indicator of how firms are doing, Palaveev says. “It’s not just the satisfaction scores, but who is likely to lose a significant percentage of their respondents.” By that measure as well, most are doing well. Slightly over 87 percent said they were very likely to be with their current firm a year from now. “These guys own their own business and could go anywhere. But basically 87 percent of them are saying ‘I’m happy where I am and I’m not looking to move,’” says Tom Daley, founder and CEO of online recruiting platform The Advisor Center. That’s a good sign for firm management.

At least for the time being, says Ryan Shanks, founder of Finetooth Consulting and Find-a-Firm. At one time, advisors affiliated with a broker/dealer because they had no choice and needed a place to do business; if they needed a fee-based platform, they could plug into the broker/dealer’s RIA.

But now, more and more advisors are looking to tap into the fiduciary side of the fence, and they’re choosing someone different, like a TD, Schwab, Fidelity or Pershing for the custody of those RIA assets. “They’re sitting there saying, ‘I think I do still want to maintain a broker/dealer, but I don’t have as great a need for them to justify a 5 percent overwrite, for example, that I’m going to take on an RIA,’” Shanks says.

That’s leading many independent broker/dealers to start redefining who they are and what their purpose is. “If you want to play nice in the sandbox with the other side, [broker/dealers] have got to figure out a way where the economics are more in line with what an advisor will embrace,” Shanks says. Otherwise, a lot of advisors are going to step away completely.

“The greatest fear in the eyes of CEOs at the broker/dealers is in the acceleration of the RIA segment,” Shanks says. For now, IBD advisors are happy, but firms may need to continue to sweeten the pot to keep their advisors in the relationship. 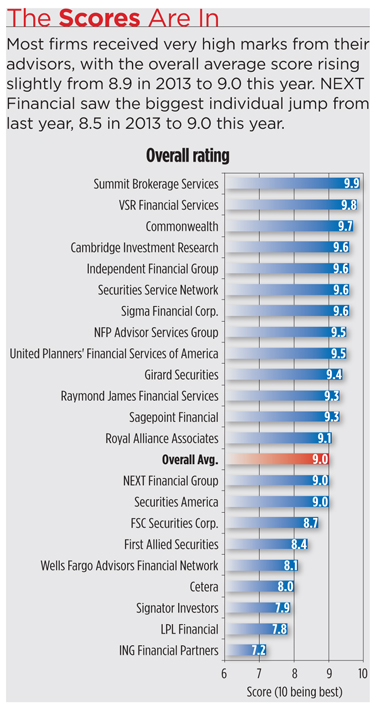