/sites/all/themes/penton_subtheme_wealthmanagement/images/logos/footer.png
Recent
Recent
Why the Shift to a Longer-Term ‘Business Owner’ Mentality Is Driving Movement
May 27, 2022
NYC Luxury Theft Boss Planned Own ‘Department Store,’ City Says
May 26, 2022
Seven Must Reads for the CRE Industry Today (May 27, 2022)
May 26, 2022
What’s the State of the Capital Markets for Cannabis Real Estate?
May 26, 2022
Featured
The 10 Best and 10 Worst States in Which to Retire in 2021
Jul 15, 2021
Poll: 15 Classic Books on Investing and the Markets
Apr 03, 2020
Fifteen Must-Listen Business Podcasts for Advisors
Aug 14, 2020
Celebrity Estates: Jay Leno and Planning for Classic Car Collections
Feb 22, 2022
IBD Report Card
brought to you by 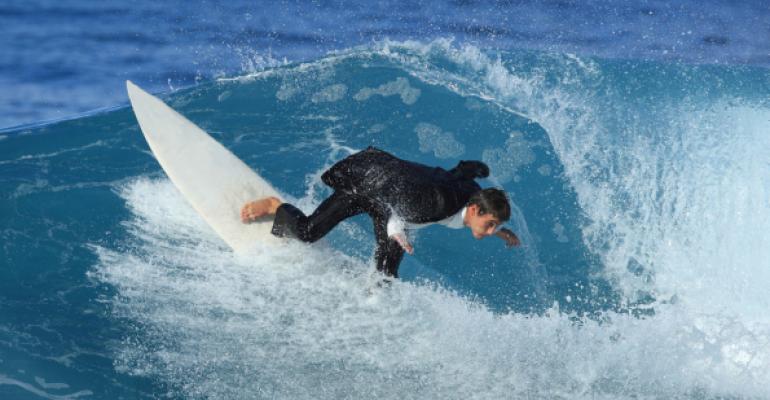 As Good As It Gets?

For the last couple of years, the independent broker/dealer channel has been in a tough spot. Post-crisis, IBDs have been buried by increased compliance burdens, greater demand for investment in technology and a lot of additional risks and costs associated with a broad move into alternative investments.

In the full bloom of the economic recovery, we’d like to say that things are looking better—that firms are more profitable—but it isn’t so. Margins remain thin in this business. Most small b/ds have profit margins at around 2 percent, compared to 2 to 4 percent margins for mid-sized firms.

“It has always been the case in the broker/dealer business that margins have been challenged,” says Philip Palaveev, founder of The Ensemble Practice LLC.

Payouts for independent advisors are steadily rising toward 90 percent, Palaveev says. And with expenses in the 12 to 18 percent range, depending on the firm’s size, the payout grid doesn’t leave much room to operate the business.

In addition, those expenses for independent firms are variable, not fixed, because so much is being paid out to the rep, says Joel Jeffrey, equity analyst at Keefe, Bruyette & Woods, Inc., who covers LPL Financial and Raymond James.

“You’re never going to see great pre-tax margins out of this business,” he says. “The math just doesn’t really work because you’re not getting the operating leverage on the upside in this model.”

On the Bright Side

While it will never be a high-margin business, there are some signs that the environment is improving. For one, the S&P 500 Index was up 30 percent last year, providing a lift to b/d and advisor profits. On average, advisor productivity increased 16 percent from a year ago, while assets under management grew 15 percent, according to REP.’s annual Independent Broker/Dealer Report Card.

CEOs are also feeling more confident in the future outlook of the business; they’re starting to invest more in the firm infrastructure and upgrading the advisor service model, says Matt Lynch, principal at Tiburon Strategic Advisors.

“The executives of these firms have taken action to contain cost because we’ve lived in this low interest rate environment for quite a number of years,” says Lynch.

The movement towards fee-based business is another positive development for broker/dealers. On average, fees accounted for nearly 49 percent of independent advisors’ income in 2013, compared to 46 percent from commissions, according to the IBD Report Card. That compares to last year’s survey, when advisors’ mix of business was 40.5 percent fees and 54 percent commissions, on average.

“It’s kind of ironic that the modern broker/dealer is a giant RIA,” Palaveev says.

The valuations of IBDs are also going up, with recent deals seeing multiples higher than they were three to four years ago, says Tiburon’s Lynch.

What has changed—and perhaps the reason prices are going up—is the institutional interest in b/ds, Palaveev says.

“There’s a new wave of buyers who are opportunistic, private equity-financed buyers, who previously would ignore this industry,” Palaveev says. Like real estate speculators, however, opportunistic buyers tend to come in quickly and sometimes leave just as fast, he warns.

“It’s a thriving, growing industry right now. But you know how they say that the seeds of destruction are sown in good times.” 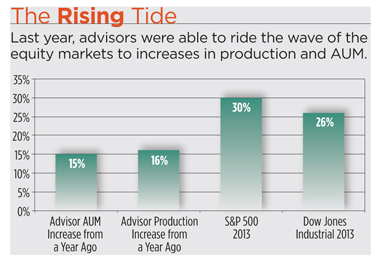