...but not necessarily better.

When it comes to social media, wirehouses and other national brokerages have a reputation for keeping their advisors on a short leash. Yet these same advisors report higher social media use than those in any other channel, largely because of their higher presence on LinkedIn. But are they really making connections, or just regurgitating canned, static content?

More than half of advisors (51 percent) say they’re on social media for business purposes, compared to the 41 percent last year, according to WealthManagement.com’s 2014 AdvisorBenchmarking Trend Report, a survey of almost 1,500 respondents across the industry.

“In general – wires have more resources to bring to bear on the marketing front – giving them an advantage. Often it is simply having the time to devote that will present a challenge to the independent channel,” says Blane Warrene, co-founder of QuonWarrene, which providing technology advice to financial advisors.

Out of all advisors, it’s those sitting at banks who are most reluctant to embrace social media—only about one out of every five use it, a number that has not budged much from previous years. 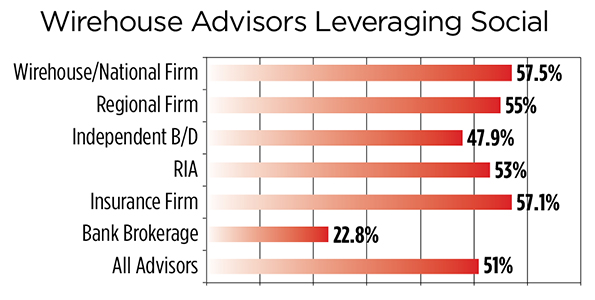 Yet having the largest footprint doesn't mean having the most effective presence.  “Some advisors, for example, set up LinkedIn and Facebook profiles and stop there,” Kenton Shirk of Cerulli Associates says. “There is a large variance across advisors in terms of the scope of their social media efforts.”

“They may have a large number of people who participated, but that just means perhaps they have set up a profile,” says Hearsay Social’s customer advocacy manager Victor Gaxiola. “I don’t know how much that (is) day-to-day, week-by-week sharing of content.” 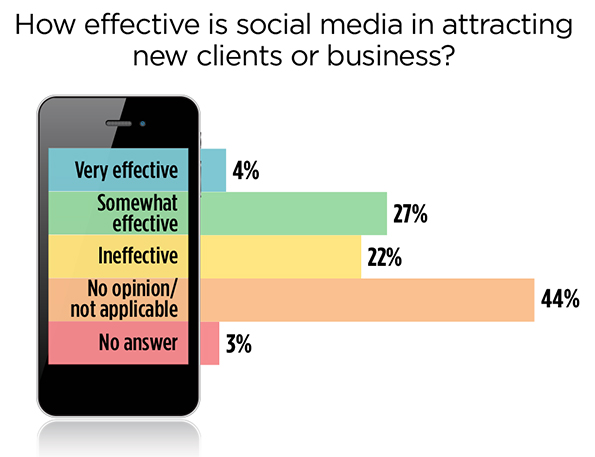 That is a long-term risk, Warrene adds. These firms often do not allow advisors social media automony and provide them with pre-scripted communications. “If content is perceived as ‘canned’ or less than genuine – which clients are certainly smart enough to figure out – a firm can look tone deaf or at worst offering radio silence when the social engagement really ratchets up,” Warrene says. Independent broker/dealers and RIAs are freer in letting their advisors express themselves, Gaxiola says.

How Advisors are Using Social

LinkedIn remains the most popular platform with 90 percent of advisors using it for business purposes, followed by Facebook (36 percent) and Twitter (24 percent). RIA firms take the lead with the highest percentage using Twitter (37 percent), while about 44 percent of RIAs say they use Facebook. 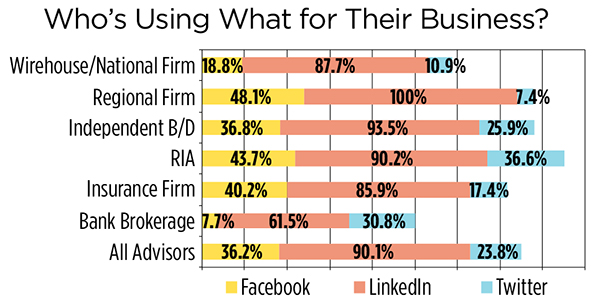 While wirehouses have the highest concentration of advisors on social media overall, they’re predominately using LinkedIn (87.7 percent), with only a relatively small percentage are venturing onto Facebook (18.8 percent) and Twitter (10.9 percent) for business. 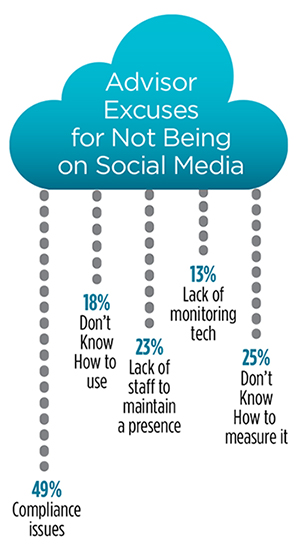 Advisors who are not on social media say compliance issues are the top reason, followed by the inability to track and measure its effectiveness. But both of those excuses may be less valid in today’s environment.

“Compliance is becoming less of a reasonable response,” Warrene says. Regulators have laid the groundwork for what's allowed, and technology can easily handle tasks like archiving.

Many advisors struggle to execute social media because of the time commitment, Shirk adds. In those cases, the largest practices are best equipped because they are more likely to delegate the responsibility to junior advisors or marketing departments.

About a third of advisors say the medium is somewhat effective for communicating with clients, while only 6 percent say it’s very effective, the survey found. But it’s still cited higher than direct mail and cold calling, which advisors say provides little perceived benefit.

Independents are probably the best positioned to take advantage of social. “The wires can’t just say, ‘Go be social,’” Warrene says. Morgan Stanley, for instance, has a pilot program allowing advisors to use Twitter and other platforms more freely, but it’s not firm-wide yet.

“That’s the untapped potential on the independent side—you have the freedom to have genuine, unique content going out month after month,” Warrene says. “We’re in a window where it’s still forgivable if you’re still learning. But I would say in five to seven years at the most, the public will be unforgiving if you’re not savvy.”

That doesn’t mean advisors have to be on every platform, but if advisors are not available to do business digitally and virtually, there will no longer be any “give,” Warrene says. If a client can’t find you, they’ll move on, he predicts. Advisors don’t want to experience a “blackberry moment,” referring to the company's inability or unwillingness to adapt to consumer trends until it was too late. “Now they’re in dire straights trying to remain relevant,” Warrrene says.